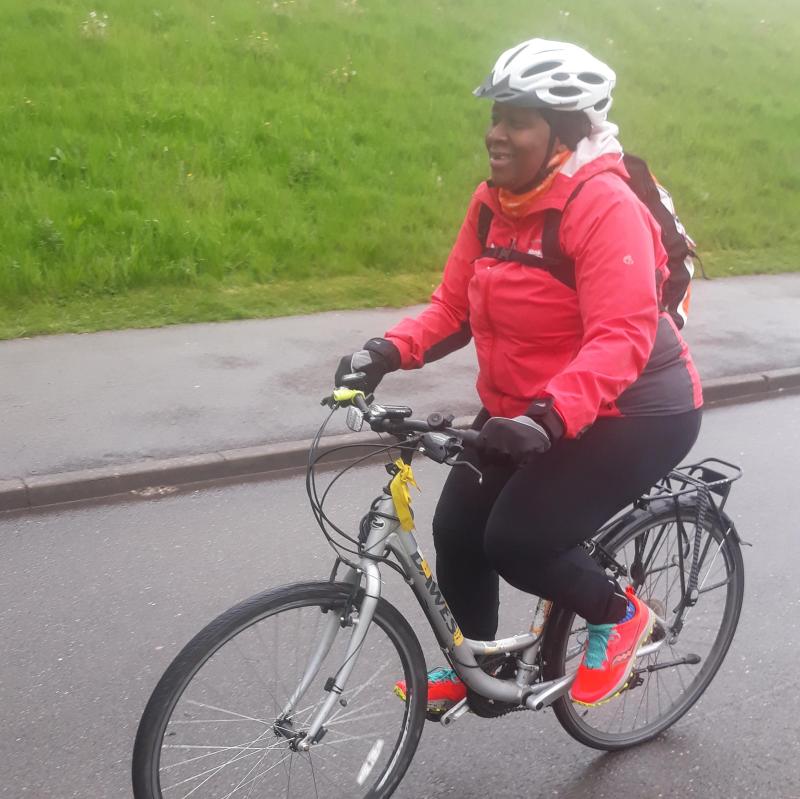 After hearing about cycling sessions in a local park, Yvonne plucked up the courage to learn to ride. After purchasing a second-hand bike, Yvonne started cycling with groups gaining knowledge and confidence. As part of her role as a Senior Health and Wellbeing worker, she set-up women's rides and is responsible for the Women Only Cycle Training project with Sheffield City Council.

"I learned to ride in 2009 at the age of 45. I remembered walking with a group when we saw some cyclists and the walk leader told me about the free cycling sessions in the park.

"Whilst I was curious, I didn’t feel I had the courage…until I made the decision to gain courage and started learning. I booked my first one to one session with a female instructor - Pam Walton. I borrowed my nephew’s bike – I’ll never forget the bruises all over my shins from that bike. After several one to one sessions learning to balance, I finally could stay up right on the bike going round a basketball court. I was very elated.

"I later started to attend group sessions. I was very nervous as I considered myself a beginner and thought everyone at the group would be very experienced.

Cycling has helped me deal with my fears as a woman who never had any aspirations to participate in any form of sports...I’m really excited to be able to put into practice my passion for encouraging others to cycle

"I attended three sessions. I had to stop when I started a new job. However, I continued practising with my nephew's bike. Eventually I purchased a second hand bike. After a few trips out in my local park I started cycling with groups. My confidence increased and I gained knowledge of bike trails in my area and further afield.

"As part of my job, I set up cycling for women in Darnall and Tinsley as one of Darnall wellbeing’s weekly activities to encourage more women to learn to cycle and to increase physical activity in managing their health and wellbeing.

"Cycling has helped me deal with my fears as a woman who never had any aspirations to participate in any form of sports. Three years ago, I had the opportunity to do my National Standard Instructor training. I’m really excited to be able to put into practice my passion for encouraging others to cycle."

Yvonne was nominated for the 100 Women in Cycling by Avril Wragg, who said:

"If you google the name Yvonne Witter of Sheffield you will see she is quite a celebrity in Sheffield and the Peak District National Park.

"Yvonne is a fantastic role model who never fails to seize every opportunity to endorse the benefits of being outdoors. Yvonne is a senior health and wellbeing worker.

"Since April 2020 she is responsible for overseeing the Women Only Cycle Training project. This is a partnership with Sheffield City Council and four female cycling instructors collectively named the 'Cyclagettes'.

"Yvonne works tirelessly to encourage women from her community and beyond to register for cycle training.

"Her mission has been to act as a positive role model especially for the local BAME community. Her challenge is to get more women cycling and to keep them cycling. Yvonne can often be seen riding her bike along the Trans Pennine Trail which runs through her local park, actively engaging with local women and persuading them to register for one to one training."