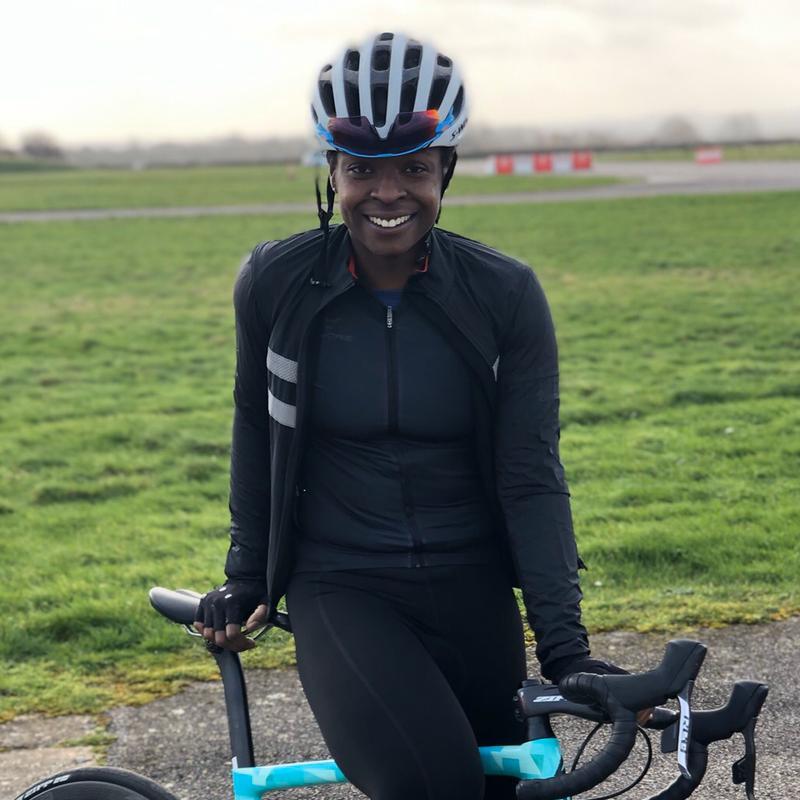 An inspiration to women of colour

After switching from rowing to cycling in 2016 Yewande was acutely aware that not many people looked like her. In a predominantly white sport, she found supportive people who helped give her a platform to share her experiences and work towards better representation in the cycling world.

Since the start of her race career in 2017 she has achieved on both road and track, gaining 2nd category road and track licence after just a year of racing. Yewande is an inspiration to other women of colour as an ambassador for SRAM and Specialized.

“Cycling has changed my life. It has made me step out of my comfort zone and constantly challenge myself.

“First it was turning up to races by myself (I was used to travelling as a team while rowing) and trying my hand at different disciplines and even riding a tandem on the track!

The more I turned up to races, the more aware I was that there were not many people that looked like me. It made me feel uncomfortable and question my place in the sport

“The more I turned up to races, the more aware I was that there were not many people that looked like me. It made me feel uncomfortable and question my place in the sport. I was shy to speak up about it.

“But I have met supportive people who have given me a platform to share my experience and feel more comfortable as a cyclist. I hope that by me speaking out I can inspire more black women to take up cycling."

From water to wheels

“I started cycling properly towards the end of 2016, having spent the six years as a rower. Up until that point, cycling served as cross-training and some commuting, but I did not consider it fully as a sport with potential for me until I decided I wanted to transition from rowing.

“I was looking for a sport that would be suitable to my strengths as a more explosive athlete and track cycling seemed to be it. It would allow me to utilise more power and pick from multiple events instead of being constrained to two main distances in rowing.

“I started cycling with my mind set on racing, but the sport has become so much more than that for me now. The friends I have made, the community I have become a part of and being able to champion diversity have amplified my experience."

The sport has become so much more than that for me now. The friends I have made, the community I have become a part of and being able to champion diversity have amplified my experience.

“Since I began racing in 2017, I have had achievements on both the road and the track. A particular highlight of my career was when I gained a 2nd category road and track license in 2018, just one year after I started racing.

“I then decided to try my hand at the track sprint discipline which led to me representing my university at the BUCS Track Championships in December 2018 and coming away with a bronze medal in the individual sprint.

“I also competed at the National Track Championships in 2019 and 2020: an event which I did not initially think I was capable of when I first started out!

“Outside of racing I am qualified as a Level 2 Cycling Coach which has enabled me to help other cyclists develop their skills and has given me the confidence to develop my own skills too."

“I have had so many amazing opportunities and experiences since I began cycling, such as being featured in the SRAM eTap AXS campaign in February 2019 which has led to ambassador roles with SRAM and Specialized. These companies, alongside Rapha who I have also had the fortune to work with, are committed to better representation in cycling, which is a change I am glad to be a part of."

Yewande was nominated for the 100 Women in Cycling by Jools Walker who said: “She's an incredible, determined and inspiring young black woman, carving out a path in cycling in what's traditionally a very white-dominated field.”