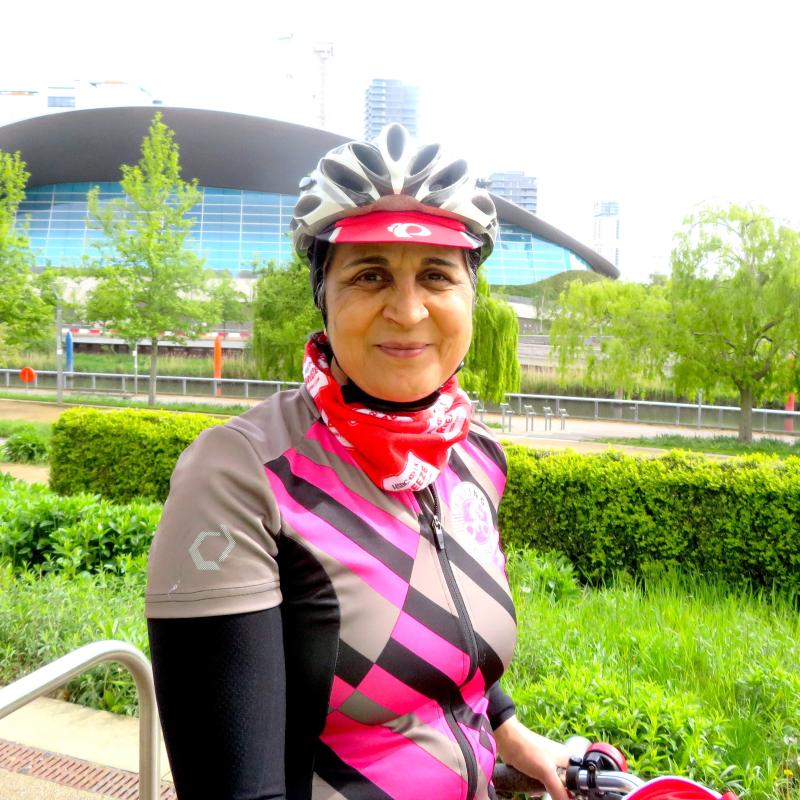 Vinodini's cycling life began as an adult where she taught herself to ride then plucked up the courage to cycle to work. The euphoria felt from learning to ride led her to teach others, lead Breeze rides and complete the British Cycling Level 1 coaching course. In 2018 Vinodini organised a women's group, the Flying Colours, for International Women's Day. The Flying Colours have been out cycling at events since.

"My cycling journey began in 2011, as frustrations grew with my unused 15 year old mountain bike which I still hadn't learnt to ride, I took it to the local park, bruised first and second time but returned the third time with a smile. Hooray - I stayed on and rolled then I plucked up courage and rode the eight miles to work in the city of London, felt utter euphoria and joy! What freedom and independence, I have continued to enjoy cycling for daily and occasional long distance challenges.

"After this I did my first full London Triathlon in 2012 in strong winds and rain. This was character making, helped in rides and self belief that water was for ducks. That wearing the right clothes and presto, any weather, all the time.

"Over the years I have pushed my own personal distances with Ride London 100, UCI championships sportive in the most challenging weather in 2019. 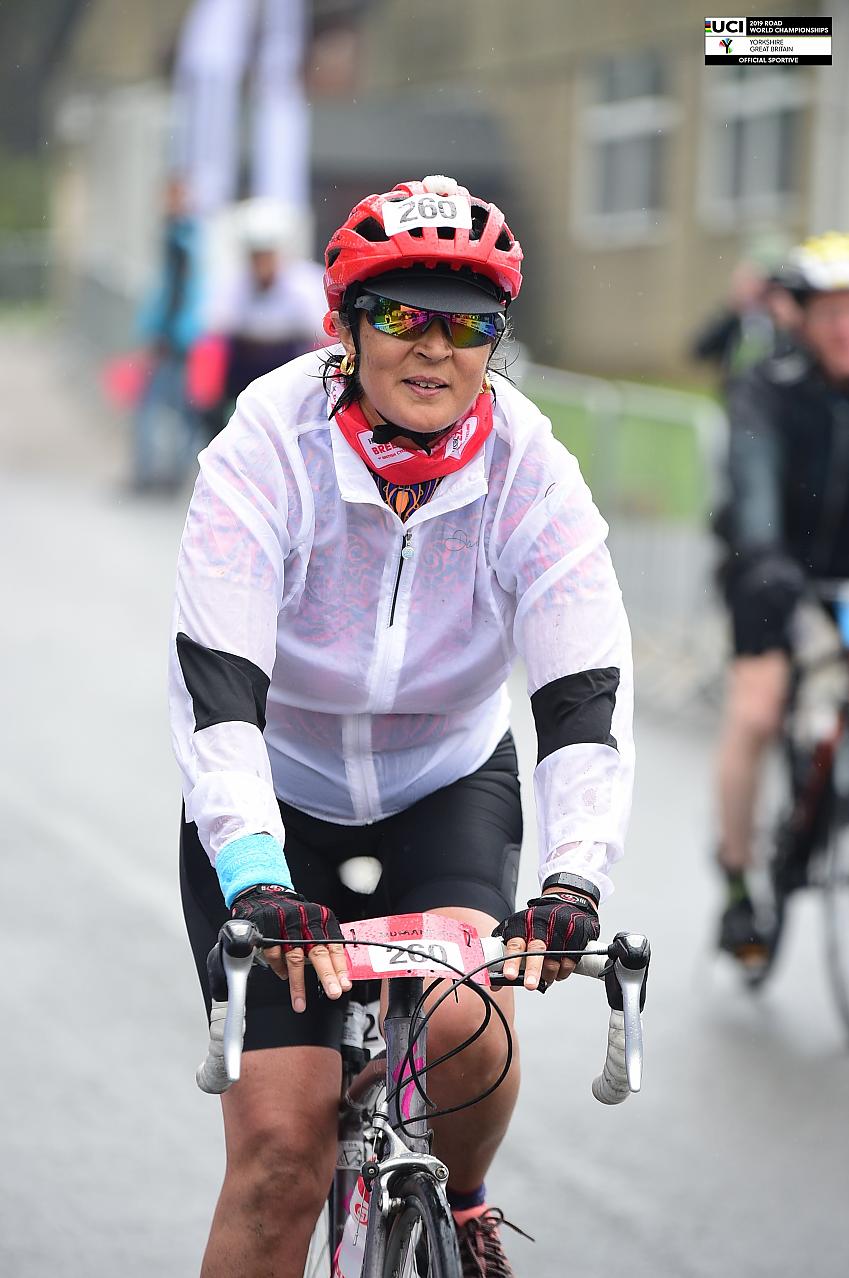 "My volunteer work includes cycling events - Ride London marshal at elite race, Ride Angel with 'Ride through the Night Women’s 100k' (Windsor to London). Out of London I have helped in Southampton Let’s Ride day and in Harrogate for the UCI championship in 2019. I also marshal at running events and with the London Mayor’s volunteer squad. In 2020 I was distributing masks at London Transport Hubs and in a month will be part of the #getlondonmoving programme, donning the Euro 2021 kit in Trafalgar Square area.

"Becoming a British Cycling level one coach and leading rides on the Breeze initiative since 2017, has been educational and satisfying with women enjoying the joys of cycling. In that time I have created around 150 rides, time willing I will be leading a few guided rides for mixed groups this year.

"In 2018 various evolving conversations before International Women’s day (IWD), and my suggestion to call ourselves the 'Flying Colours' came to be adopted for the IWD ride - my mother was my inspiration and I suggested wearing scarfs from one of her bright Sari’s and this was the glue which brought us together in that warm glow. Later the same year, six of us decided to do the 'London to Cambridge' sportive with the Flying Colours logo designed by one of my riders, printed on a jersey.

Members of this group have proudly rode on some of the sportive and events, enjoyed the camaraderie and achieving a goal they had never imagined possible

"Based in Newham as the first dedicated women’s organised ride group, the Flying Colours attracts a lot of interest and I’ve had some favourable feedback. Members of this group have proudly rode on some of the sportive and events, enjoyed the camaraderie and achieving a goal they had never imagined possible. 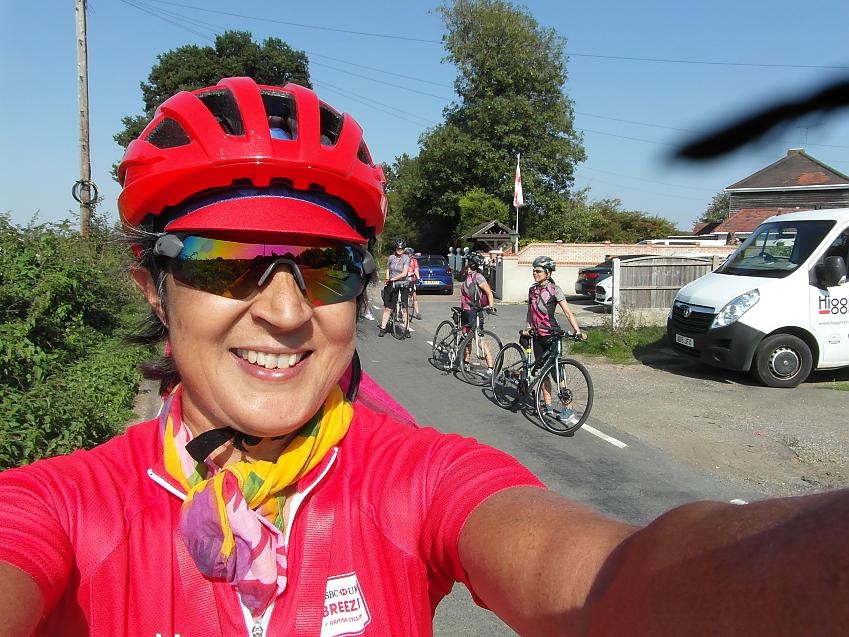 "Here began my enjoyment of cycling and being out there with friends, shopping and encouraging others to take it up. Family and friends are thinking about better mental health with roads and infrastructures adapting to the growing need to accommodate bikes on the roads. It helps everyone de-stress as it was the reason I began to cycle many years ago because of crowded London trains being too stuffy, always catching a cold or anti-social behaviour, loud mobile conversations or poor hygiene.

"During the Pandemic, a few rides took place, helping everyone adjust after the first lockdown. A few zoom calls help us connect face to face, along with organised Capital ring walks as a Run England Sports coach / Ramblers Walk leader. This seemed to help all in the winter gloom of another lockdown. Coaching beginners improve on basic skills so journeys to work were less stressful.

"We do have such fun, laughter and I’d like to think that we always get home feeling better then when we left it. My Flying Colours motivate me, helping one another and sharing photos (though I’m the chief photographer!). This group in these troubled times has been fantastic support especially when lockdown seemed to go on and on… 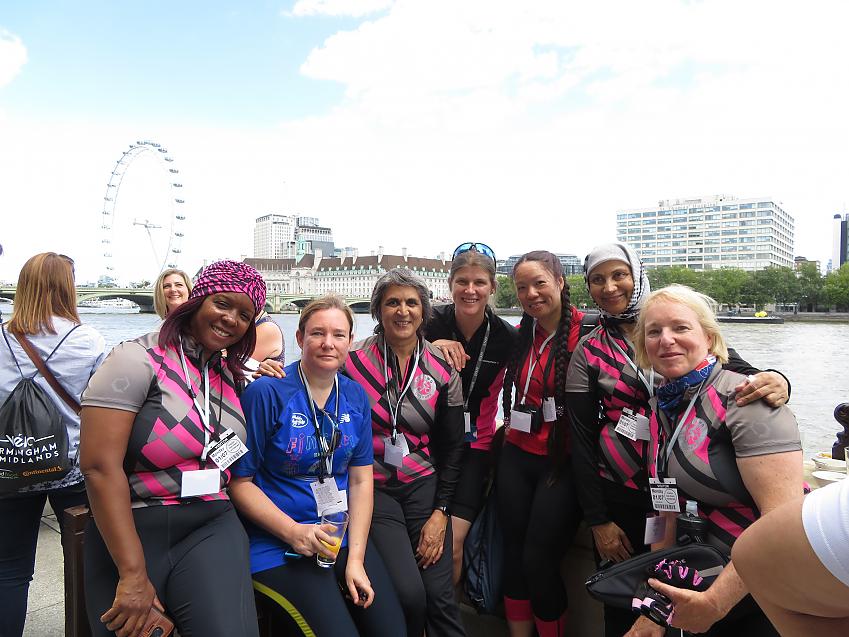 "Two of the ladies pictured above are also Breeze Champions - Misbah was due to lead with Cyclesisters for the first time last Sunday and Brenda has completed over 100 Breeze rides. So I guess, my starting rides and providing a 'can do attitude' has given confidence and seeing BAME role models helps in the process.

"My group of ladies are so much fun, but more importantly we support each other and that is what makes it so special. We understand the barriers, whether it is women trying to do their now thing from their partners or just single women who feel the warmth, from this non-judgemental group.

"In terms if funding, I haven’t managed to get any help from Newham Council’s Male led transport projects. I’ve been fobbed off which is why I have last weekend signed up to Cycling UK’s and created 'The Flying Colours cycling club' group."

Vinodini was nominated for the 100 Women in Cycling by Katherine Harris, who said:

At the beginning of last year, I could not ride a bike and as an adult felt that it was too late for me to learn. Then I met Dini. She had great patience in teaching me to ride. Dini also learned to ride a bike as an adult so really does understand what it's like to learn when you're an adult and the extra challenges this comes with.

She truly is an inspiration for others, making me realise that not only is learning to ride a bike as an adult possible, but that it is possible to gain the skills to be able to lead and inspire others to do the same

She is an absolute inspiration. Not only did she learned to ride as an adult, she now teaches and encourages others to ride. She is passionate about teaching cycling and is very community minded and organises group rides (when the rules permit) so you can meet others ladies in a similar position and build confidence by riding in a group led by her.

She truly is an inspiration for others, making me realise that not only is learning to ride a bike as an adult possible, but that it is possible to gain the skills to be able to lead and inspire others to do the same.