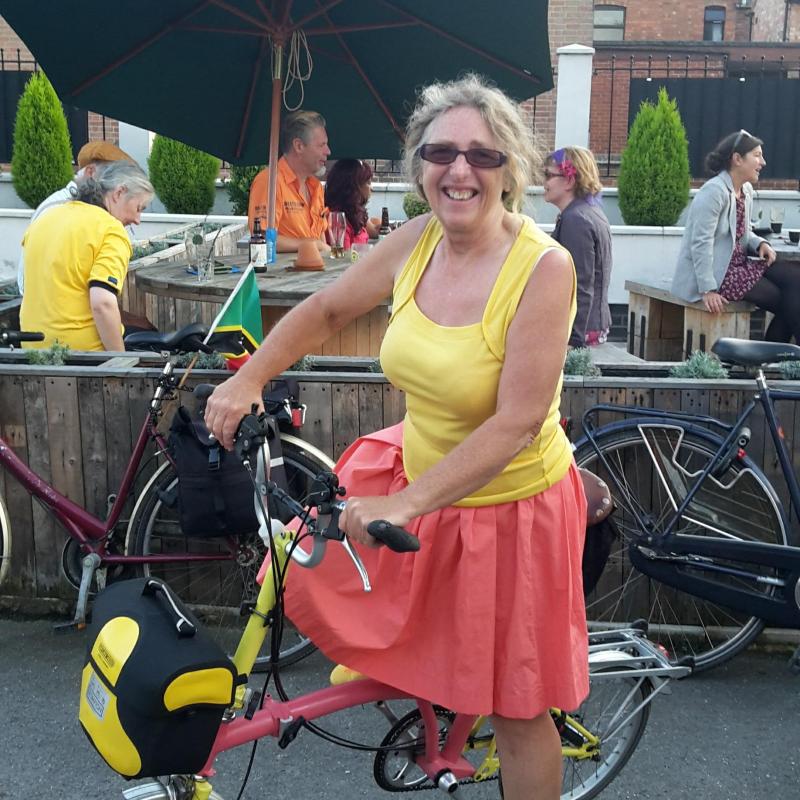 Susan has been a cycle campaigner, ride leader and cycle trainer in Nottingham for many years after getting into cycling in her early 20s. Straight away Susan saw cycling as her main way to get around and has since devoted years to making cycling more accessible to others in Nottingham.

“Having not been allowed a bike as a child, I bought a second-hand bike in my twenties (1970s) as the answer to commuting to work. Since that first wobble home I was hooked and a bike has been my primary transport since.

“Next purchase was a good waterproof. I was now officially a bit odd as most people aspired to owning a car (I could already drive). I would tell anyone how cycling was such a great way to travel in the urban/city area and to try it.

“I found out about the formation of a local cycle campaign group Pedals, went along to a meeting and have been an active member since.

My aim has to be a positive example as to how cycling can help women especially, to balance home, children, work and some fun and to help anyone with a route, where to get a bike, helping them gain confidence and no, you do not need special cycling gear

“My aim has to be a positive example as to how cycling can help women especially, to balance home, children, work and some fun and to help anyone with a route, where to get a bike, helping them gain confidence and no, you do not need special cycling gear.

“Through Pedals I began to lead local rides and as they became too successful for a small voluntary group, they became a ‘Rural Rides’ programme coordinated by Notts County Council. They included rides of varying length, some focused on those new to cycling, local places of interest and to get people familiar with the local area. As these folded I became involved with facilitating some social rides for a casual local Facebook group.

“After helping with Velo City in Nottingham, I became a founder member of my workplace Bicycle User Group and took my experience to a project to encouraging cycling where I later worked.

“We had success with improved parking, showers, local infrastructure and the ‘new’ bike to work scheme.

“I trained as one of the first National Standards cycle instructors through Ridewise, to further support staff to begin cycling to work and signpost them to appropriate groups to ride with.

“Cycling life was further enhanced when I bought a folding bike. Not being the best mechanic, it opened up my riding much further afield using public transport or to do linear rides. I also joined in rides much further afield through the Origami Rides and London Brompton Club.

“I had been a Cycling UK member and began to ride with them regularly and attending the birthday rides and other events. This helped me to become more confident and to cycle longer journeys such that I have now enjoyed touring both alone and with others in the UK and Europe.

“Still leading rides, working as an instructor, campaigning and riding for transport and fun. No empty nest blues here!

“I hope that one day I will not get comments such as why didn’t you take the bus/tram/car as I turn up to on my cycle, maybe in ordinary clothes and heels.”

Susan was nominated for the 100 Women in Cycling by Hugh McClintock who said:

“For nearly 40 years Susan has been a very important figure on the cycling scene in the Nottingham area, as a cycle campaigner, ride leader and cycle trainer, in particular."