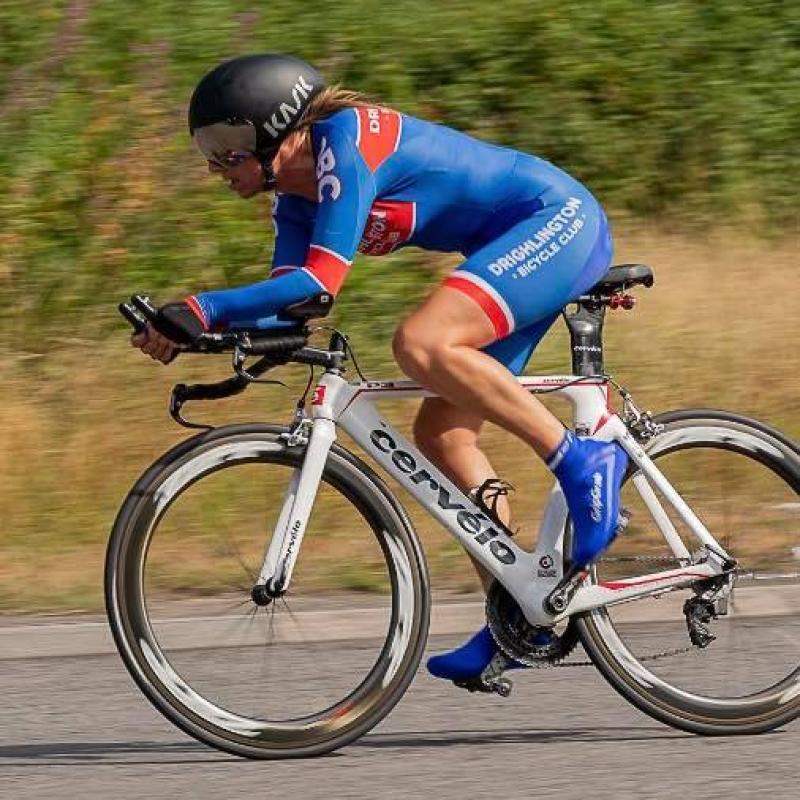 Champion of women and new riders in local riding group

Susan began cycling with her husband on mountain biking trails. After discovering a love of road riding, she joined her local club and began entering time-trials and triathlons. After having equipment stolen and then being badly knocked off her bike by a car, Susan's confidence was shaken. But she got back on her bike and she also put her efforts into getting newer riders and more women to join.

“2014 was the year that I hit a ‘pre’-midlife crisis and discovered cycling, it all started with my husband and I mountain biking around the local trails simply enjoying steady rides together.

“Then we switched to road bikes and soon discovered something called ‘speed’ and oh how my world was about to change.

“Once we were fit enough we joined our local cycling club (Drighlington Bicycle Club) and I soon progressed my cycling from steady club rides to time trials and triathlons, within a couple of years I had raced my first 100 mile time trial and various Ironman Triathlon events.

“Developing my cycling skills and competitive racing was only ever possible due to the levels of encouragement and support from both my husband and members of our club.

“Last year I decided it was time to pass on that support and encouragement - since I have been with our club we have never really had an entry level group where those wishing to take up road cycling could come along for shorter, steadier and more social rides.

“Last summer I took the first steps in implementing introduction rides, which soon became popular in attracting new members to the club, some of whom have gone on to achieve success in local hill climbs, sportives and are now very confident riders.

“Unfortunately a month or so into the project and three weeks prior to my 'A' race at Ironman Copenhagen in August 2019, I was knocked off my bike by a car during a solo training ride and sustained a fracture to my neck with extensive injuries to my hip and shoulder, for which I am still awaiting an operation to correct.

“In addition, as I was off the bike for some time my confidence and trust in other road users has taken a huge knock and after nearly 12 months I still find it mentally tough to get back out on the road.

“It’s simply my love of racing that keeps me getting back on the bike, and in November 2019 I recommenced time trial training with a great coach and the view to racing again in 2020, earlier this year I managed to get one race in before lockdown in which I PB’d :-)

“Fingers crossed we might get some more racing out of the season, but if not, here’s to continuing on the personal journey and getting back to where I was before the accident and to keep ‘Paying it Forward’ by encouraging and supporting others to take up cycling.”

Fingers crossed we might get some more racing out of the season, but if not, here’s to continuing on the personal journey and getting back to where I was before the accident and to keep ‘Paying it Forward’ by encouraging and supporting others to take up cycling

Susan was nominated for the 100 Women in Cycling by Sean Sanders who said:

“Last year Susan identified the need to further promote riding for those new to the sport within our community and as such spearheaded a campaign for C group riders within our club.

“These were rides with no pressure to perform and lead at the speed of the slowest rider. They were social and inclusive to all. Susan prompted this while developing her own training for endurance time trials and Ironman Triathlon which served as an added inspiration to all.

“In July 2019 Susan had over £10k worth of cycle equipment stolen from her home Including her triathlon bike. One month later she was hit by a car whilst on a training ride and suffered extensive injuries including a fracture to C7 of the spine and serious shoulder damage and psychological stress.

“Susan is back on the bike attending and promoting C group rides, something she has done throughout even promoting and supporting rides while immobilised in a neck brace.

“Susan still faces her personal challenges of surgery to her shoulder and the ongoing psychological battle of fear and trepidation every time she heads out onto the road but as her husband, I know she puts all of this to one side to help and support others.

“As a result of Susan’s selfless efforts our club has seen its membership surge by 20% and we now have the largest number of female members in our 95 year history. We now have a structure that going forward will go from strength to strength to support our community and our sport."