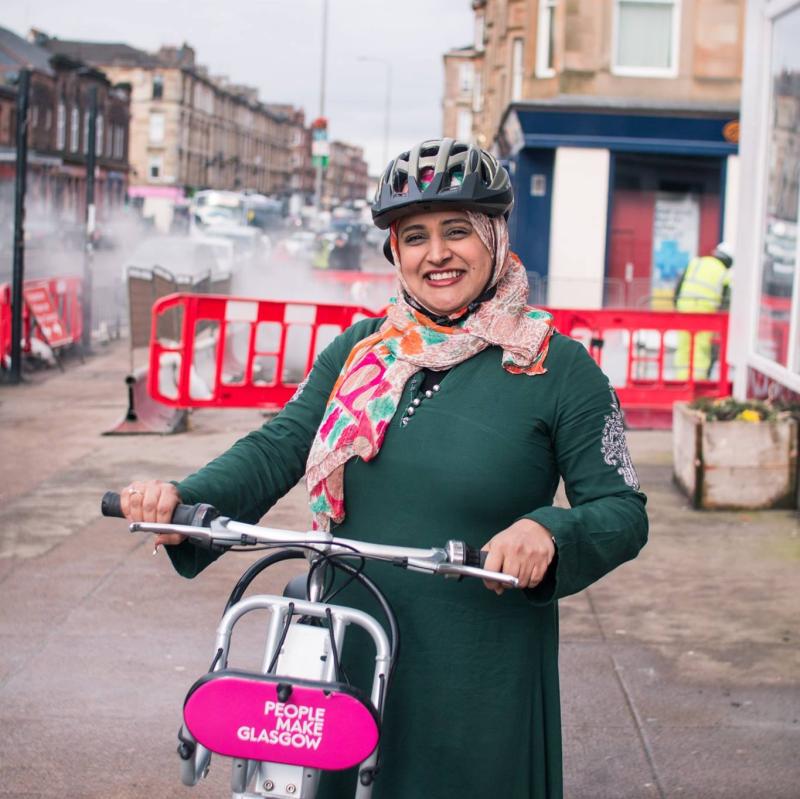 Inspired to get back on her bike in adulthood Shgufta has used her newfound love of cycling to inspire other Muslim women to give it a go.

Shgfta has supported women to learn to ride and overcome religious, cultural and health barriers first through the Muslim women's charity, Al-Meezan and then as the South Community Hub Leader at Bike for Good, a cycling charity in Glasgow.

Still building her cycling skills and confidence she jumps on her bike at every opportunity, always remaining true to her Muslim faith and modesty.

"I cannot actually remember when I started cycling. I have a photo of me wearing all white in Pakistan on a bike in my early primary years and then another in my 20’s in Sardinia with some friends. That’s as far as cycling memories went."

"Fast forward a number of years to working at Al-Meezan, a Muslim women’s charity, and my role in running a climate change project which included sustainable travel. I got back on a bike.

For me, being on a bike was one thing, but seeing other ethnic minority women on a bike, who all came to us with barriers the length of my arm was what really fuelled me

"Not only did I get inspired to get back on a bike as an adult; but in working alongside other passionate Muslim female cyclists, the Al-Meezan Cycling group was formed.

"Together with another lady, Mahnoor, the glue and mother figure of the group, I received training, and went on to train others in basic lessons and rides. Then we trained up ride leaders, started venturing out and doing charity bike rides (iCycle, Callander, Pedal for Scotland). It was soon clear that cycling had become a major passion of mine.

"We supported women to learn to ride a bike overcoming religious, cultural and health barriers. Our trainees included an ex Transport Minister’s mum and sister!

"For me, being on a bike was one thing, but seeing other ethnic minority women on a bike, who all came to us with barriers the length of my arm was what really fuelled me."

Setting up a new cycling hub

"Four years later, a job advert was shown to me and I tentatively applied for the role of Development Officer, with the task of setting up a cycling Hub in Govanhill. However, there was a catch… The ideal candidate needed mechanical skills. And I had a big skeleton in my closet; I didn’t really like the mechanical aspect of bikes, let alone understand what I was doing.

"However, I shouldn’t have doubted myself or my ability to learn! I was offered the job, and now run a successful cycling hub in the Southside of Glasgow. We are now heading into our third year and have just moved into a much bigger premises so we’re able to cater for the growing demand of cyclists and wannabe cyclists.

"I have grown and developed my cycling skills over the years and passed on my passion to my two daughters.

"Despite my growing confidence and love for cycling, I have very little support from my family (who claim I’m going to get killed on a bike), and a husband who would prefer to drop me off than see me get on my bike.

"This makes me more determined to do things by bike at every given opportunity. Whether that is commuting to work, going to class, getting to the gym, or getting my groceries. But, I do have a long way to go before cycling is my main form of travel. I am confident that I will get to that point, but it takes work!

"It’s a priority for me to remain true to my Muslim faith and modesty. I’ve gone from wearing my gym clothes, to ruining everything long-ish I owned by getting it caught in a bike. Now I buy clothes through the lens of a keen cyclist.

"Would this look good on a bike? Check. Am I modestly covered up? Check.

"My biggest aspiration is to go touring around Scotland by bike, while overcoming my biggest personal barrier. No, not the weather. Packing light!

Shgufta was nominated for the 100 Women in Cycling by Caro Kemp who said: “Shgufta has done a huge amount to encourage women to start cycling, particularly those from Muslim and Asian communities.

“She worked for several years for Al Meezan, a Muslim women's charity in Glasgow, co-ordinating a project to combat climate change by encouraging women to get on bikes.  She then went on to develop the south hub of Bike For Good, a social enterprise in Glasgow. The biggest users of the hub are now ethnic minority women. This is no small feat considering that they face religious, cultural and gender barriers to riding bikes.”