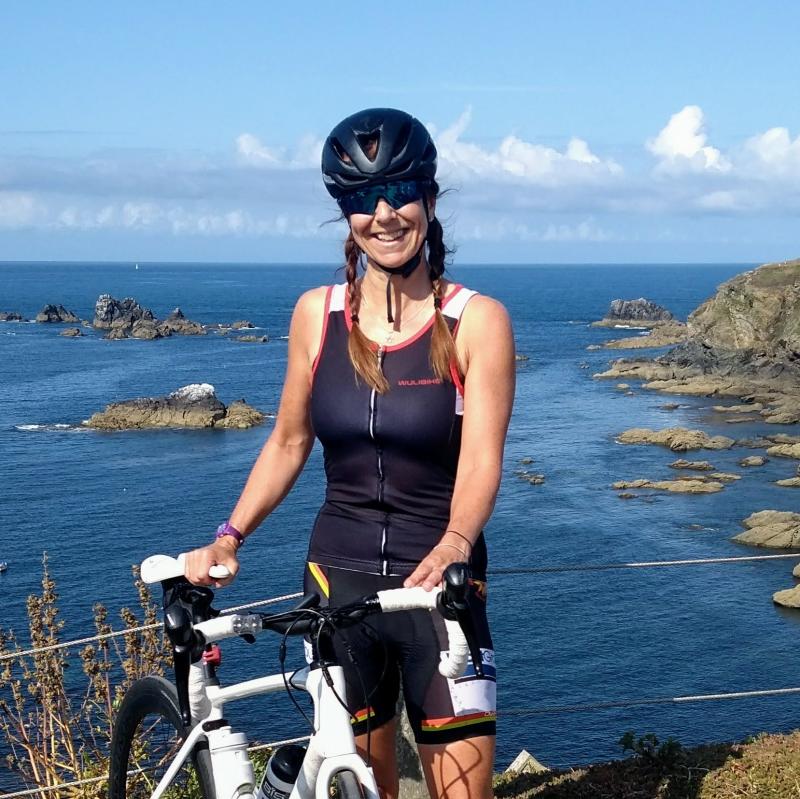 Founder of the Boldmere Bullettes

After overcoming her nerves of cycling on the road with the help of a cycling group she then began supporting other new cyclists. As not many women were currently joining the group Sarah started some women only rides also organising maintenance and training sessions.

“I have always enjoyed pootling around on bikes, but first took up proper road biking as a hobby in 2014 when I joined a local collective called the Boldmere Bullets.

“As a beginner I was nervous on the roads and found the main group rides very challenging, so eventually I was supported by experienced cyclists at the Bullets to help me to take the lead of a slower more entry level group.

“I stayed and helped bring people into this Super Social group for almost a year before feeling confident enough to ride in and lead larger groups and at much greater speed as my fitness and bike handling skills increased.

“At this time not many women were accessing our club (I myself had found being one of the only women there a bit intimidating at first...) so along with my friend Tara I started running women-only social rides to bring more women into cycling and help increase their confidence.

At this time not many women were accessing our club (I myself had found being one of the only women there a bit intimidating at first...) so along with my friend Tara I started running women-only social rides to bring more women into cycling and help increase their confidence

“We have also organised women only maintenance and training sessions and for the last three years we have coordinated a local inter-club event celebrating International Women's Day.

“All this has happily resulted in a sizeable increase in women joining in with the main mixed groups and has definitely helped to re-address any gender imbalance at our club.

“In 2017 the Bullets won Sutton Coldfield Sports Club of the Year having raised over £30,000 for local charities. In the same year, some of my friends were also kind enough to nominate me for Sutton Coldfield Sports Volunteer of the Year in 2017 which unbelievably I actually won (although in reality I am part of a fantastic team who all give up a lot of their free time to help organise our club's activities).

“In subsequent years I have taken part in several ultra-endurance events (Chase the Sun three years running) and last year qualified and represented Great Britain masters at the UCI amateur Grand Fondo World finals in Poznan, Poland (I came 14th in my age group!) I am currently dabbling with time trialling.

“I enjoy riding socially with my family, and commute to work by bike when I can. I continue to help lead a range of speed groups at the Bullets, and also regularly ride recreationally with a great informal group known as the S18s.

“I have recently qualified as a British Cycling Breeze Champion, so am looking forward to supporting more women to get into cycling once groups rides can resume.

I have recently qualified as a British Cycling Breeze Champion, so am looking forward to supporting more women get into cycling once groups rides can resume

“I have met lots of wonderful people since I discovered cycling. It has given me a huge amount of pleasure and is now an integral part of my life. It has felt amazing to have hopefully helped more women to experience how much it can do for both physical and mental wellbeing, and how much anyone can achieve if they are encouraged to give it a go like I was."

Sarah was nominated for the 100 Women in Cycling by some of her cycling friends.

Claire Benson said: “Sarah has inspired many, many local women to get involved in cycling by endless gentle encouragement. She is completely inclusive and will find a way for everyone to get involved and radiates positivity, puts others first, is funny, determined and non-judgmental.

"She truly has changed the lives of many people in her community, enabling people to improve their physical health and mental health. there are many friendships that would not have developed without Sarah's efforts. She also has done amazing fundraising for charity; last year she and I did a 100 mile tandem ride, with me on the back all the way.”

Lisa Morris said: "Sarah began cycling 4 years ago and last year competed in the over 50 category at the UCI Championships in Poznan.

"Sarah noticed that most of the cycling group were male and that this was intimidating for female cyclists, particularly those who were new to road cycling. Sarah set up the Boldmere Bullettes, a women’s only cycling group in North Birmingham. I started riding with the group having had no experience of road riding and no knowledge about how to change gears or fix a puncture. Thanks to Sarah and the support of the Bullettes, I have now completed three century rides and have made so many friends.

"Sarah is good fun, supportive and always encouraging us to achieve more than we think we are capable of. She is a true hero and it is a privilege to call her my friend."