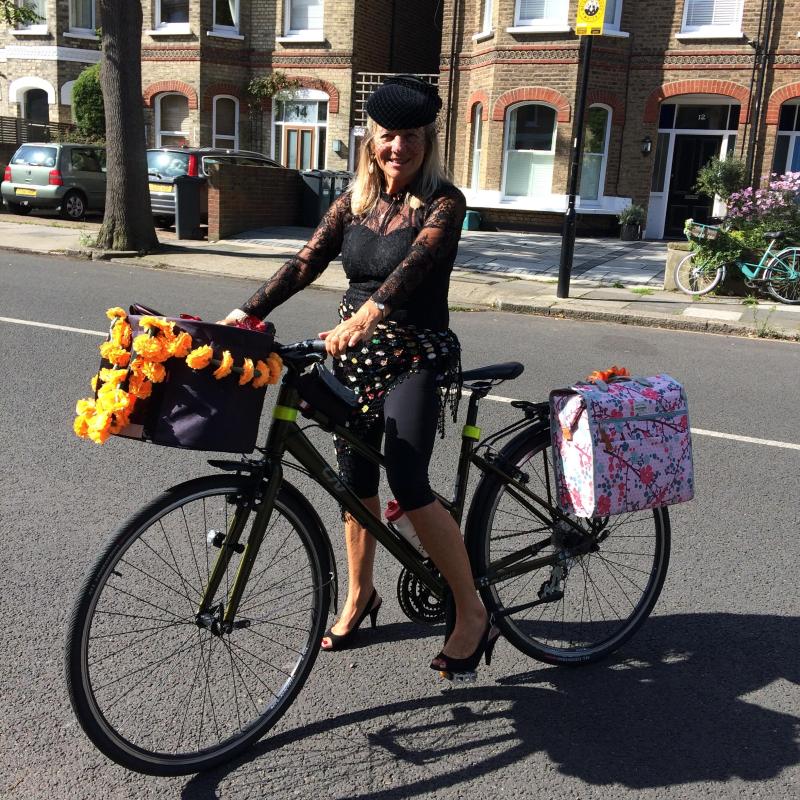 Living in Amsterdam in the 1970s helped forge Ruth's view that riding a bike needs to be – and can be – normalised and made safe for all. In the years since, Ruth became involved in the Safe Routes to Schools campaign. These days she regularly attends the London Assembly and local consultation meetings about cycling and participates in the Stop Killing Cyclists campaign. Alongside her relentless campaigning, Ruth is a role model on the bike, making cycling a feature of her everyday life.

I passed my Cycling Proficiency age 11 but was fairly hopeless and didn't really cycle until (age 23) living in Amsterdam in 1976 where it was so easy to control the bike and felt safe - I imported a Dutch Dames Fiets and cycled to work as much as I could. I cycled with my son in a kiddie seat, then alongside but it was not until joining EFR cycle coaching I gained the confidence to cycle longer distances and big hills!!

"I absolutely love cycling, it is such a great way to get about and share my love with as many people as possible - especially women who may feel it is not for them or are put off by what to wear or with feeling unsafe.

"I have campaigned for Cycleway 9 in Chiswick for the last 25 years, thrilled we have it and encourage especially women to use it. I taught my son to ride, rarely used a car, and he has a love of cycling as do I.

I always hope that being seen at the age I am using a bike for shopping, socialising and holidays, other women will feel empowered to do likewise

"I have a Dutch partner and we spend much of our time cycling in the Netherlands where it is just such a normal activity. I always hope that being seen at the age I am using a bike for shopping, socialising and holidays, other women will feel empowered to do likewise. I have become very proactive in raising awareness of how poor cycle infrastructure deters people, especially those with mobility issues.

"I am a key part of an online event called Ideas With Beers with Brian Deegan and Robert Davies where I bring the view of the older non-professional woman into focus.

Ruth was nominated for the 100 Women in Cycling by several people, this is what they said.

"Ruth is an irrepressible, persuasive and knowledgeable champion of normal, everyday cycling for all. She does not aspire to be a ‘hard rider’ but espouses everyday cycling wearing normal clothes as a natural part of life. Time spent in the Netherlands has increased her conviction that riding a bike needs to be – and can be – normalised and made safe for all: she is charming, eloquent and forceful even when confronting ingrained car-centric opposition.

"She is extremely well known, well-informed, and well-connected in her local area of West London and London as a whole.

Ruth is an irrepressible, persuasive and knowledgeable champion of normal, everyday cycling for all

"Ruth frequently attends London Assembly and local consultation meetings about cycling matters, where she speaks eloquently and passionately about the obstacles to ordinary cycling, the benefits and the solutions. She was regularly involved in and took part in demonstrations and protests ('die-ins') with the Stop Killing Cyclists campaign, alongside campaigning with London Cycling Campaign, encouraging others to join in and speaking publicly about the need for safe space. Ruth has formed strong relationships with local MPs, Councillors, and leaders in Transport for London and LCC as well as celebrities such as Jeremy Vine, and is respected by them for the time she takes to engage, inform and support them. 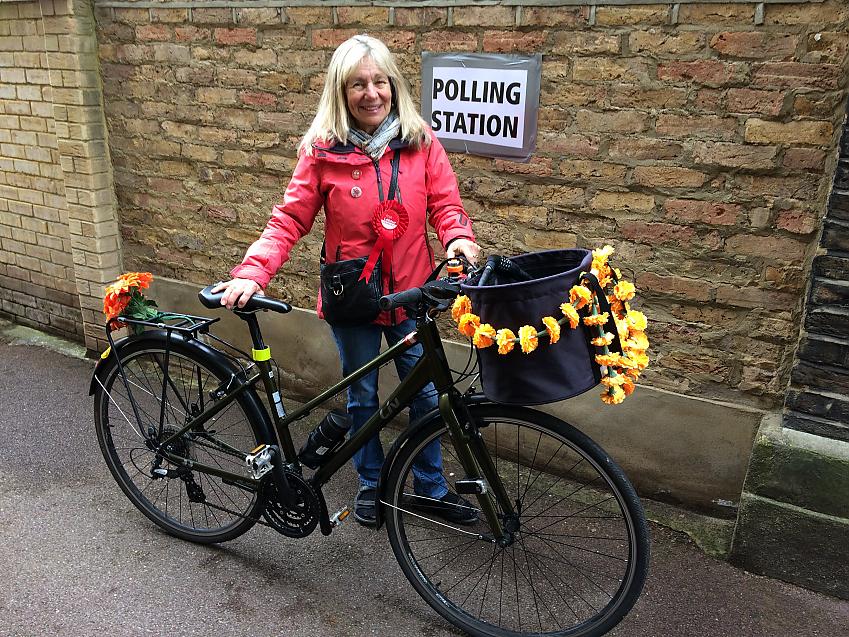 "Ruth says that most of her campaigning is done one-to-one; chatting to women and others about their cycling experiences, or writing copious emails to MPs, councillors and journalists. Her advice is not to get hung up on special clothes, helmets or tools: you can wear your regular shopping clothes to cycle to the shops. She believes it's vital to get mothers and children cycling to school: they will grow up into adults who cycle. She encourages people to find and join a local cycling group for social and recreational cycling; riding in a group provides support and encouragement with varied and enjoyable rides, pleasant routes, new friends, and a chance to discuss concerns and learn new strategies to ride safely." 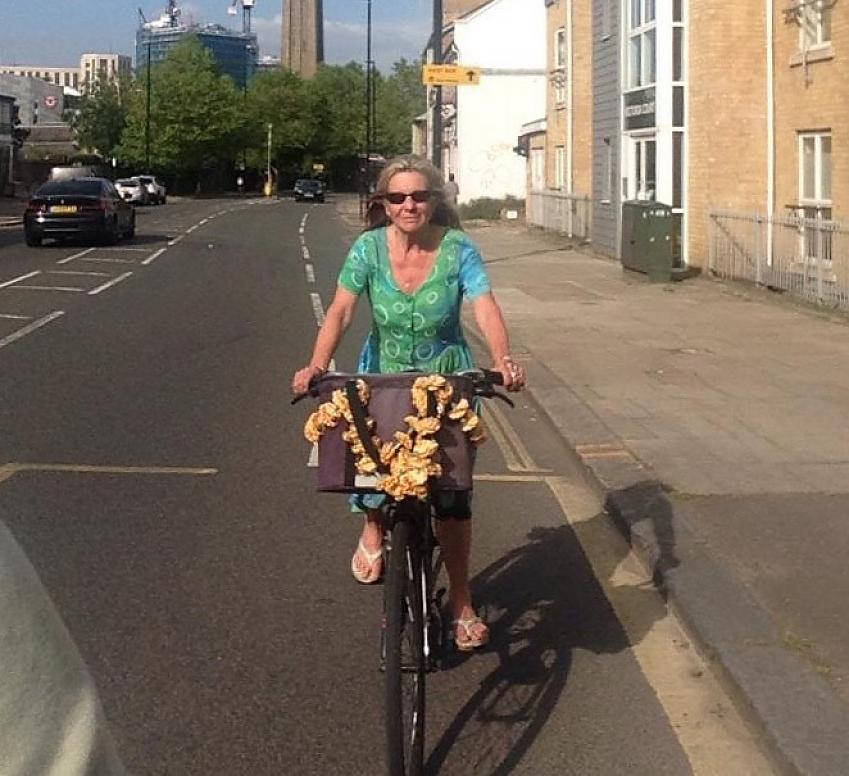 Ruth was also nominated by her son, Jack who said:

"I can think of no better role model for what cycling could, and should be for most people. Since I can remember, my mum has been a passionate advocate for cycling for all. Not seeing it as a sport, or as something you need to prepare for, but just as a healthy and practical mode of transport.

"Her work as a campaigner speaks for itself, whether it’s lobbying politicians at all levels, or organising events for construction workers to see the pinch points along cycle routes, her dedication and clarity of voice has made an impact on the cycling landscape in London for many years. Indeed, her long-held views on cycling infrastructure in the capital have now become mainstream thinking and she now has a regular ‘final word’ slot on the popular virtual group ‘Ideas with Beers’.

"Ruth also has a lovely way of encouraging and bringing others into cycling, showing people what is possible and offering friendly advice - whether it’s helping the leader of Hounslow Council on what bike he should buy, or leading friends on routes they wouldn’t otherwise attempt.

"Away from campaigning and advocacy, the sheer number of miles Ruth covers is impressive in and of itself. Averaging around 500 miles a month this year, people are often gobsmacked when I tell them the distances she has covered. Whether it’s a ride simply for pleasure, or raising money for charities such as Smartworks, she is guaranteed to bump into some she knows - a testament to her standing within the cycling community and local businesses.

Although I may have moaned as a young child about being made to cycle everywhere, I couldn’t thank my mum more for instilling a love of cycling in me from an early age

"Although I may have moaned as a young child about being made to cycle everywhere, I couldn’t thank my mum more for instilling a love of cycling in me from an early age. I now use my bike to get absolutely everywhere, and in lockdown it has been a god-send, allowing us to meet up safely and regularly throughout this difficult period.

"I could not commend Ruth more highly for inclusion in this year’s list, and I know that there are countless other people who would say the same." 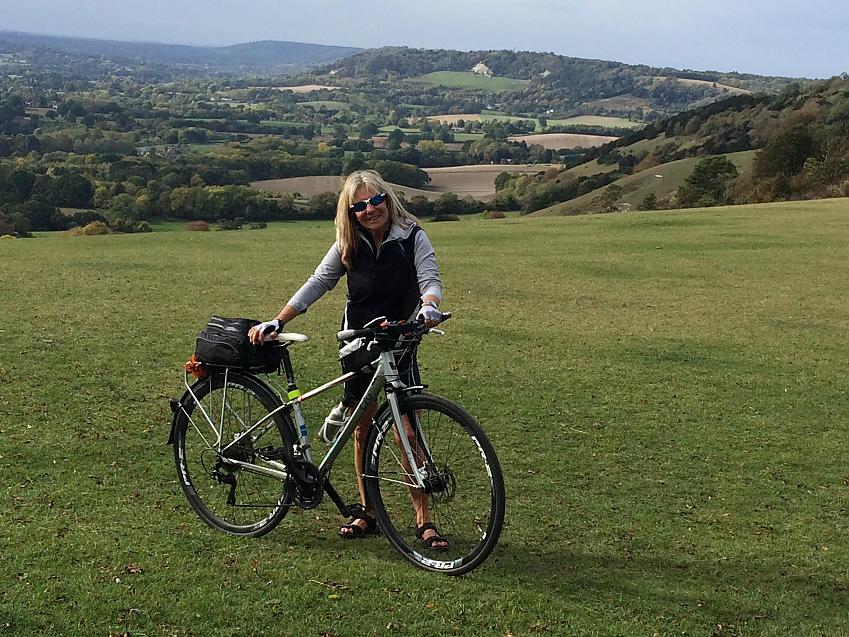