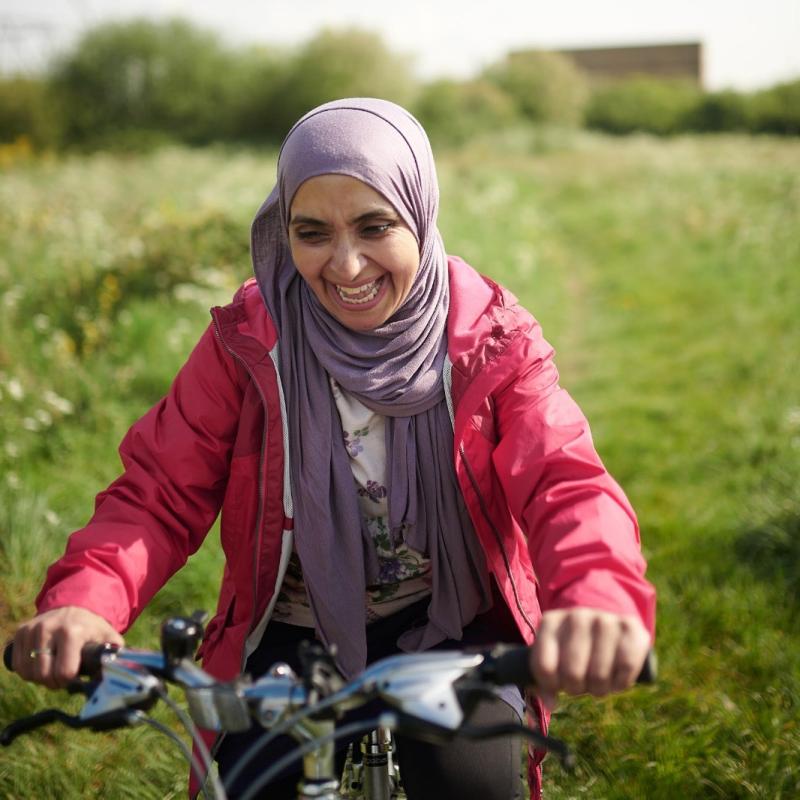 Alongside working and being a busy mum of four, Rukaiya is deeply committed to getting Muslim women cycling. She is a ride leader for Cycle Sisters and JoyRiders London, leading rides for all levels, and also sets herself personal challenges such as the Tour de Salah in 2018 and London to Cambridge in 2019. She is a regular volunteer with Good Deeds on Bikes, helping to rescue food and distribute to food banks via bike.

"I learned to ride a bike when I was eight years old on my sister's BMX bike and stopped when I was in my teens. Roll along many years, with four children, of which the two older children would go out cycling with their dad and come home to tell us all about their cycling adventures, it was then I realised I was missing out on something fun.

"I practiced cycling on my eldest son's bike, had cycling refresher lessons and remembered thinking 'I’m never going to be able to do this'.

"In 2017 I bought a second-hand bike and got involved with Cycle Sisters where I met like-minded Muslim women without feeling out of place. It’s true you never forget how to ride a bike. I finally bought a new bike, became a confident cyclist and got my family and friends into cycling.

I’m glad I had the opportunity to take up cycling later in life. As a Muslim woman, wearing a hijab, to me dressing modestly whilst feeling comfortable is a priority for me

"In 2018 I was asked to train up as one of the first ride leaders for our Waltham Forest Cycle Sisters’ group. I was super excited and nervous at the same time. I am now a ride leader for Cycle Sisters and I am supporting and mentoring our new ride leaders.

"I am also training to be a Bikeability cycling instructor so that I can help other Muslim women enjoy the wonders of cycling and help women who, like me, never thought that they would have the confidence to ride a bike.

"I have been involved in longer rides; London to Cambridge and London to Southend, a charity bike ride. I now cycle to work, for shopping, for leisure and for my health.

"I’m glad I had the opportunity to take up cycling later in life. As a Muslim woman, wearing a hijab, to me dressing modestly whilst feeling comfortable is a priority for me." 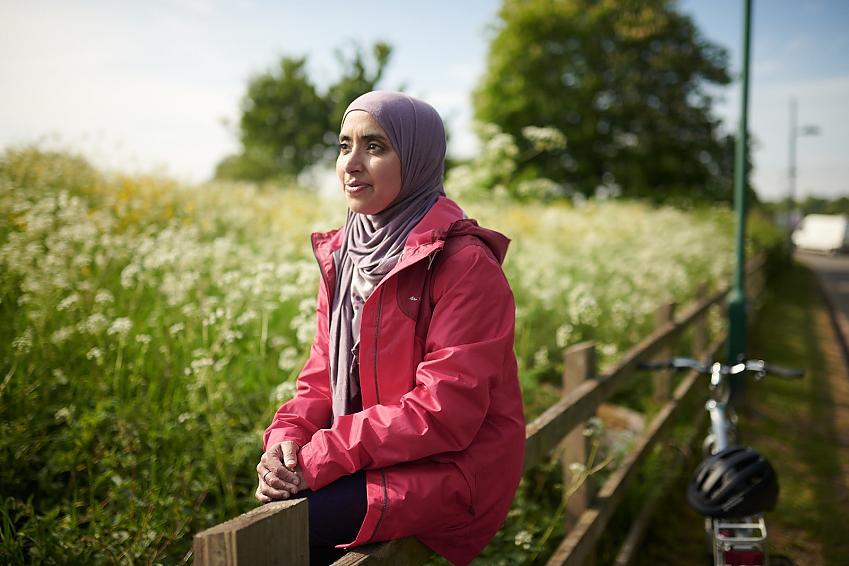 Rukaiya was nominated for the 100 Women in Cycling by Khadijah Zaidi, who said:

"Rukaiya is deeply committed to getting Muslim women cycling. She is a ride leader for two cycling clubs in Waltham Forest - Cycle Sisters and JoyRiders London. Despite working three days a week in a large secondary school and being a busy mum to four children, she has given up the mornings of both her days off to lead rides around East London for over three years. Rukaiya is a role model for our riders showing them just what can be achieved on two wheels once you put your mind to it.

"Rukaiya started cycling regularly a few years ago, and soon joined both Cycle Sisters and JoyRiders on their weekly group rides. It was clear that Rukaiya had a lot to offer and could become a role model and leader, and she trained as a ride leader at the end of 2017. She started to volunteer leading rides at all levels - beginners, intermediate and also challenging rides where the group cycled much further distances than they normally do. Whichever ride Rukaiya is on, her enthusiasm and drive shine through and is passed on to riders, whom she really encourages whilst they develop on their own cycling journey.

Whichever ride Rukaiya is on, her enthusiasm and drive shine through and is passed on to riders, whom she really encourages whilst they develop on their own cycling journey

"During the lockdown Rukaiya cycled regularly with her children as well as on her own. She always shared lovely pictures of the rides she did with others on the Cycle Sisters WhatsApp group to motivate others to cycle. In October she completed an impressive ride from London to Southend to raise money for Yemen and since then she has been pushing herself even further with longer distance rides. Her passion for cycling is such that, in March/April 2021, she will be completing training to be a Bikeability cycling instructor so that she can help build up cycling skills within her local community.

"In 2020 Rukaiya was elected to be joint rides officer for Cycle Sisters Walthamstow. In this role, she and her fellow rides officer Seema Jadwet organise the ride rota for the term, which is no mean feat for a cycling club with three rides a week in Waltham Forest! Rukaiya and Seema also look at developing new routes to keep our ride calendar fresh and exciting. 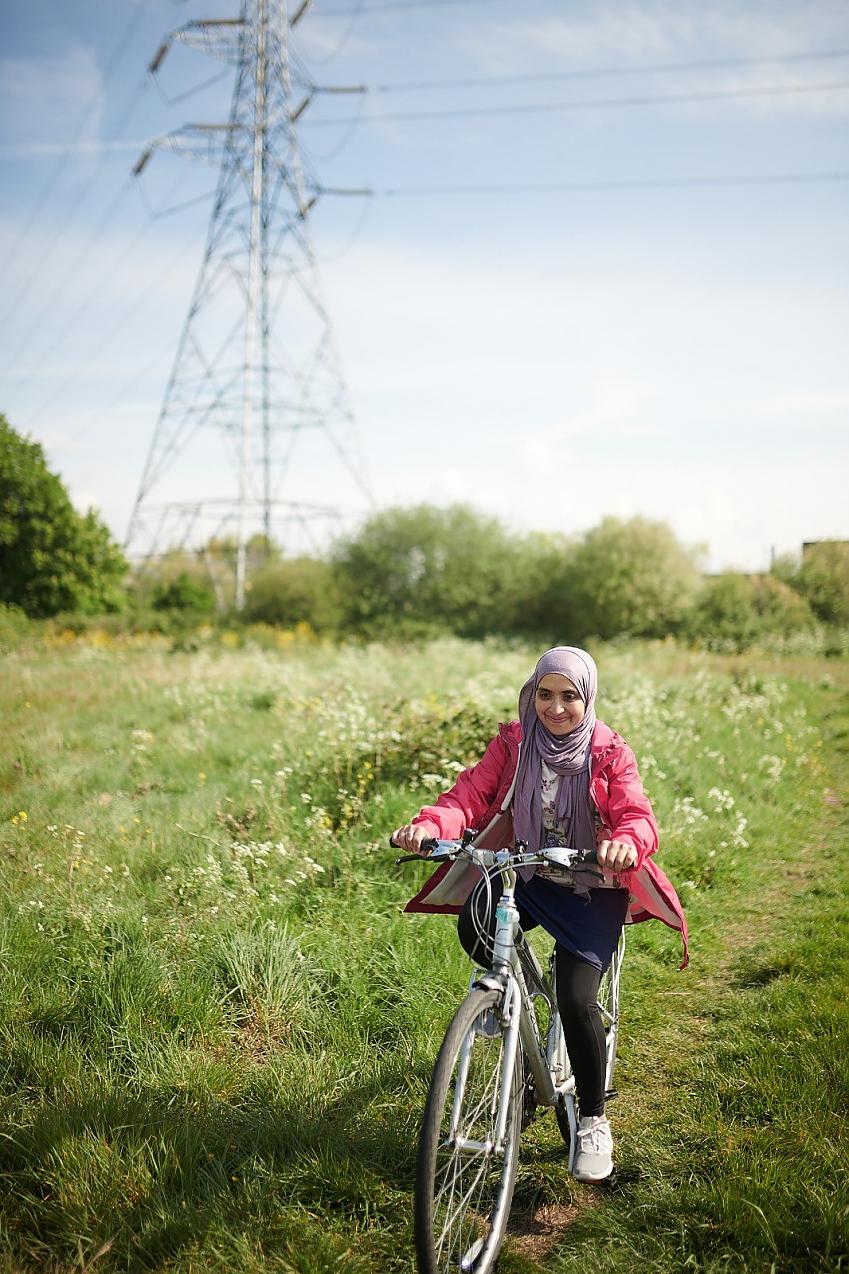 "Rukaiya has taken on some fantastic cycling challenges. She completed the Tour de Salah 2018 30km, a ride which involved cycling around London and stopping off at a few mosques on the way. She will often ride with the parents' rides organised by FECycle on Sunday mornings. Most impressive of all, Rukaiya completed the London to Cambridge cycle ride in August 2019!

"Rukaiya now regularly commutes by bike to work and to do her shopping. She is also a regular volunteer with Good Deeds on Bikes, helping to rescue food which would otherwise be thrown away from supermarkets for distribution to food banks and other venues. She also regularly rides with her family on family rides and has got her whole family into cycling!

"Rukaiya has a passion for getting people cycling. She has also been involved in the ‘This Girl Can’ initiative, promoting cycling and getting really strong and positive images of Muslim women on bikes out into the mainstream. Rukaiya has inspired many and through her own impressive cycling journey, she has been instrumental to getting many more women locally involved in cycling and definitely deserves recognition for everything she has achieved."