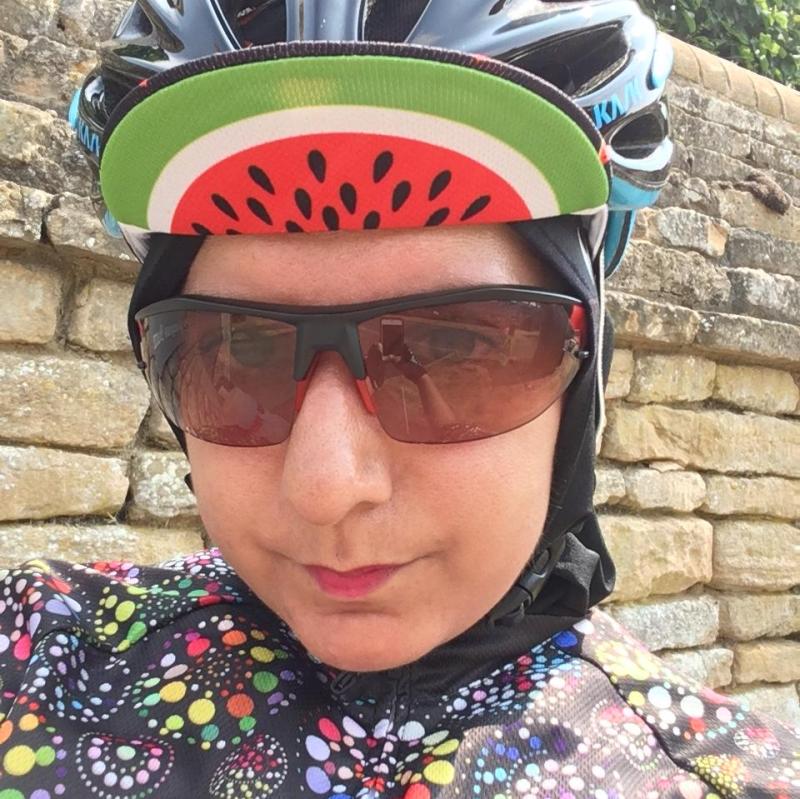 Moz has overcome many challenges to become the inspiring cycle leader she is today. Coming from a background that didn't encourage girls to cycle she taught herself and then later trained to become a Breeze Champion. Her desire to see more Asian and Muslim women cycling led her to set up the first cycle group aimed at BAME women in Peterborough.

“I taught myself how to ride a bike whenever I could get hold of my male cousins' bikes at the age of around six. It was deemed inappropriate for Pakistani girls to ride bicycles on the street when I was growing up. I never had my own bike, nor did I have much confidence to ride a bike around anywhere besides the back garden.

“18 years later after realising that I could still ride a bike, albeit a bit wobbly, I took some lessons with a cycle instructor and eventually bought my own bike. I was proud of my purchase but still not very confident to ride from my house, which is in an urban area and not instantly on a cycle way.

“It wasn't until 2016, a day before my 29th birthday that I decided to go out riding with a bunch of male colleagues at work. They were lycra-clad road cyclists who wanted to go as fast as possible and here I was with my jeans and town bike. However, this instilled a new found love of cycling longer distances and riding on the road with confidence.

“Towards the end of 2016, I became a Breeze Champion to encourage more women to cycle and have led lots of rides with the help of fellow Breeze Champions in the Peterborough area. I decided to take part in a cycling challenge and ended up signing up for the first ever women-only Women V Cancer London to Paris event.

“I benefited a lot in totting up the miles on road rides set up by the local Breeze Champions, as well as riding with the founder of Deeping Lady Riders, Melanie Evans.

“I eventually completed the three day challenge in September 2018 and this gave me a new drive to give back to the community, just like how the Breeze Network and Deeping Lady Riders supported me.

It wasn't easy for someone like me to take up such a challenge, especially when from a community that doesn't encourage women to take up outdoor sports

“It wasn't easy for someone like me to take up such a challenge, especially when from a community that doesn't encourage women to take up outdoor sports. I was also suffering symptoms for Crohn's disease and eventually diagnosed with the condition in October 2018. That made training tough and created doubt in my abilities.

“I felt lucky to have had the opportunities to take up cycling later in life, but it also felt lonely and almost wrong that I didn't personally know any women that were Asian as well as Muslim taking up cycling. This led me to network with other groups in the country and eventually set up the Facebook group, Muslim Women Cyclists in November 2018. It now has over 120 members and allows a safe space to discuss the barriers into cycling, as well as to inspire others.

“Fast forward to 2020, I set up the first women's Breeze cycle group aimed at BAME women in Peterborough, with most of my participants being Muslim women and wearing the hijab. I wanted cycling to become visible amongst women of colour, as well as women wearing cultural or religious clothing. Our group was featured in the BBC's Inside Out East program, showcasing what cycling means to us and how group cycling helps with wellbeing and confidence and encourages even more women to take up cycling.”

Moz was nominated for the 100 Women in Cycling by several people they had this to say about her:

“She has a great energy about her and is always happy to help where she can. Once she got more confident, she became a Breeze leader. She now also runs a Monday Breeze ride in the centre of Peterborough to help fellow Asian ladies get into riding too.”

Maryam Amatullah said: "Since she began her cycling journey in 2013, she realised that there were hardly any women amongst her own community that were cycling. It was a slow journey for her due to the lack of South Asian female role models in sport, nevertheless she continued to deliver rides mainly during the week as she has a son with special needs who takes up much of her time at weekends.

“Moz's incredible work is inspiring more women wanting to join the group. To receive this award would be so amazing and uplifting for Moz to continue the great work she is doing, which will hopefully give her the recognition she deserves in Peterborough and within the community.

“Moz continues to inspire and motivate to carry on with the cycling group that I work with in my local area. We need more women like Moz!"

Sarah Javaid said: "Moz deserves to be recognised on the Women's List as she has done a lot of work to push the agenda for Muslim women cycling. She took the initiative to set up the Muslim Women Cyclists Facebook group which is the first online network of female Muslim cyclists in the UK (with some international members too!).

“Moz does a fantastic job of posting advice, information and inspiring stories in this group and encourages others to share their stories and journeys too. It has been such a lovely way to connect with others around the country who have similar experiences to our own.”