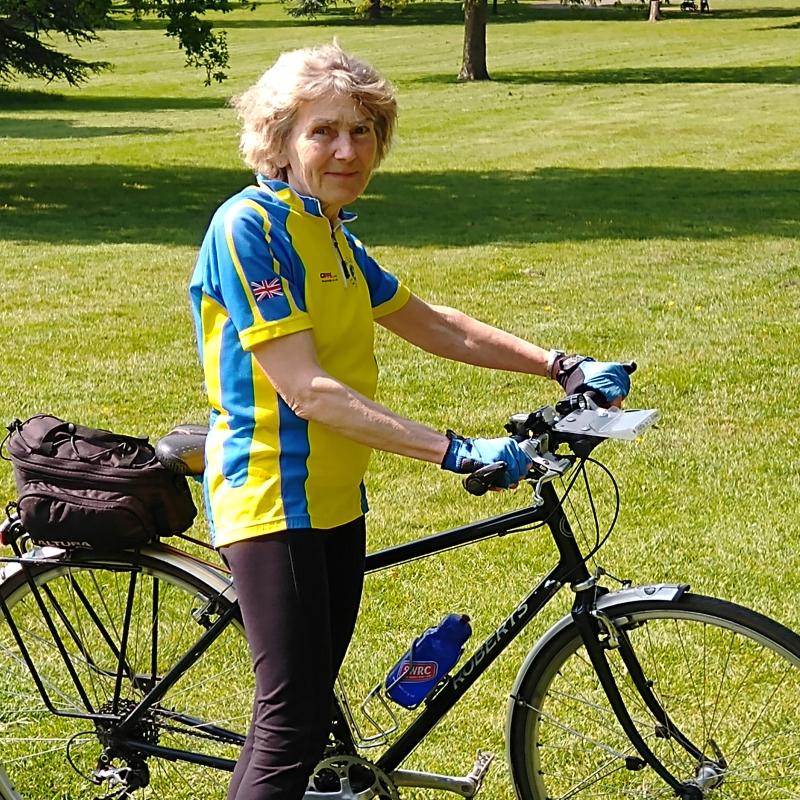 Ride leader and founder of the Sou'Westers cycle group

Life member of Cycling UK Lynda Barrow has been a part of the South West London cycling group for over 20 years and was instrumental in uniting several groups together and bringing many new cyclists to the group.

Friend and one of the previous 100 Women in Cycling, Shirley Quemby spoke to Cycling UK about Lynda’s cycling history and how she has inspired, promoted and celebrated cycling.

“The saddle was too low, and she was unhappy tackling even quiet roads nearby. Gradually she accepted the saddle being raised and the leaders' guidance on how to cycle positively on the carriageway. Lynda's part-time work was caring for an elderly lady three times a day for which her bicycle was the easiest transport.

“Lynda joined CTC (now Cycling UK) on 25 January 2000 and is a life member. Experienced leaders helped Lynda to choose a Saracen touring bicycle from AW Cycles at Merton which she enjoyed for 8 - 10 years.

“The Beginners had been running every week since 1996 and had attracted a number of 'middle-aged' women who also encouraged others to join.

“Friendship developed amongst all members and small groups joined the CTC and began exploring our country. An early experience with Beginners' newer ladies was the Southend ride for the British Heart Foundation which Lynda enjoyed.

“There was always valuable advice available from the experienced cyclists who led the rides to cafes every Saturday afternoon. Lynda attended indoor cycle maintenance classes to learn from local CTC members. She has continued to learn from fellow riders who she finds are quicker at effecting roadside repairs than she is but she has the knowledge to ensure her bicycle is always in good order and safe to ride.

“From 2004 Lynda with other members has attended the Dieppe Raid twelve times. This introduced her to youth hostelling (in her fifties) en-route to the ferry.

“South West London Dieppe Raiders have brought home a remarkable number of cups and trophies for their support of this event. Both Midweek Wayfarers and Beginners attend and, with Lynda's encouragement, united using the name “Sou'Westers”.

“Lynda applied for a grant and all Sou'Westers have for some years been wearing matching shirts with the winged wheel (plus the Union flag on each shoulder) identifying all are from CTC South West London.

“It is Lynda who has achieved remarkable unity across all three sections whereas formerly very few riders knew members of other South West London sections.

“In 2008, when the Saracen was showing signs of wear, Lynda had a Roberts built for her which she found lighter and gave her lower gears. Lynda has been a regular leader for the Midweek Wayfarers' weekly 'Easy riders' group as well as continuing her support of the Beginners, being on the rota for leading them to one of the twelve or so cafes favoured for the short rides suitable for newcomers.

“For some years Lynda has also met cyclists from CTC Central London at a Surrey station and led all-day rides into Surrey's glorious countryside.

“Lynda understands and appreciates the value of both modern and older churches to communities, history and the scenery. Every year since 2002 she has cycled in a group to many local places of Christian worship on the annual Ride and Stride day in September to raise funds for the preservation of these precious buildings.

“Sometimes Lynda has visited forty churches on the day. However, her friends and neighbours were unaware that pedalling forty miles for this petite, companionable older lady was a normal day's ride. Unsurprisingly, her sponsors revised their offer of £1 per church!

“At Easter, when the Good Friday meet was held at Herne Hill, Lynda with several Beginners joined the racing scene by not only enjoying watching the competition but enabling touring members to learn about track racing including why the bicycles apparently had no brakes. On several Good Fridays, after the programme, Lynda rode her touring bike round the track and encouraged her companions to share this experience too, before cycling home.

“Lynda has been a strong supporter of the CTC Birthday Rides, again encouraging others to book for a week of fun and friendship with the opportunity to get to know an area of interest in the UK. She lists those she has attended as Dumfries and Galloway, York, Stafford, the Cotswolds (twice) and Wyboston Lakes.

“In 2019 Lynda joined the team of Sou'Westers who gave time beforehand to ensure lanyards and packs were prepared for the 400 riders booked for Wyboston Lakes and she manned the reception desk on the first day.

“In her own words, Lynda is amazed at what she has accomplished during her 20 years with the Sou'Westers. She has joined trips led by others or organised them for groups herself which included touring the Isle of Wight, Kennet and Avon Canal, Ledbury, Lindisfarne and Holy Island, Melton Mowbray, the Whitstable Festival to follow the Crab and Winkle Way, Holland, Scotland, Germany, Denmark, Spain and she has stayed at many gites in France.

“For all these years Lynda has shown that women can not only enjoy cycling safely but be competent leaders of a wide variety of mixed groups including organising accommodation and transport at home and abroad. Her grandchildren are the next generation now benefiting from her enthusiasm and knowledge as their riding skills improve.”

For all these years Lynda has shown that women can not only enjoy cycling safely but be competent leaders of a wide variety of mixed groups including organising accommodation and transport at home and abroad. Her grandchildren are the next generation now benefiting from her enthusiasm and knowledge as their riding skills improve