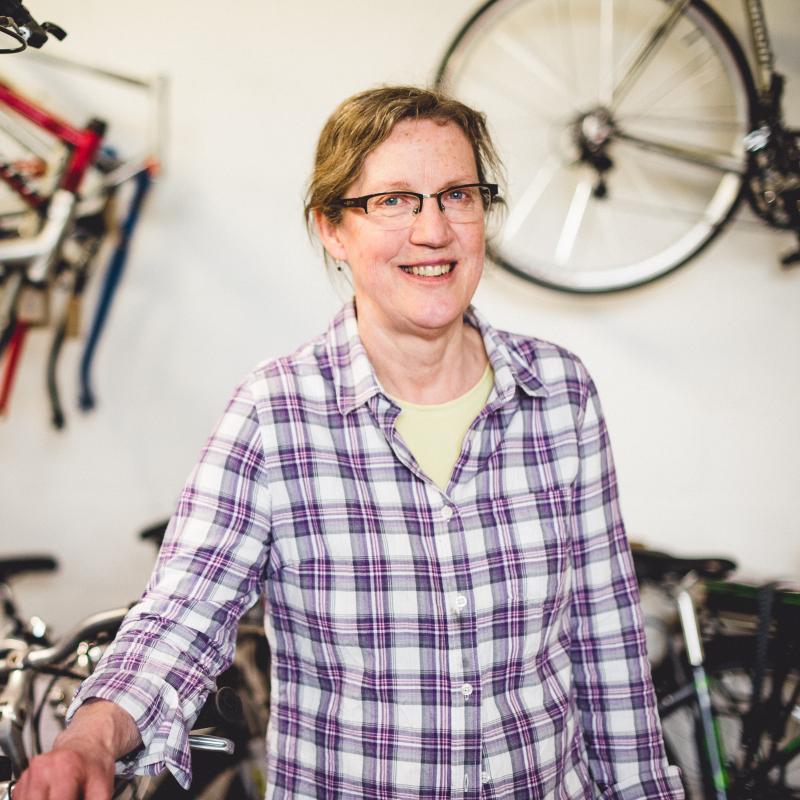 Lucy started cycling regularly in 1980 when she moved to London. Fast forward to 2011 when she set up Bicycle Links, Norwich. Alongside managing a sales and repair workshop; she has also initiated social impact projects, such as free/subsidised bikes for the unemployed, refugees and asylum seekers, and children in disadvantaged families. The projects involve volunteers, and Lucy has tutored many of them to fix and refurbish bikes.

"I started cycling regularly in 1980 when I moved to London after college. From then on I was mostly a commuter cyclist, although I took part in some fundraising bike rides. I helped a friend out who did support repairs on the London to Oxford bike ride, and one year he couldn’t come, so I found myself doing repairs on my own. I think that lodged something in my brain!

"Forward to 2011, after my mother died I was free to work full-time and needed a new career. I met another cycling enthusiast while volunteering, we took a look at social enterprise bike projects around the UK and thought ‘Norwich needs one of those, why don’t we set it up ourselves?’

"I’ve learned pretty much everything on the job. I enjoy working with my hands and picked up mechanic skills fairly quickly, just through being immersed in it eight hours a day. We also had to learn how to run a bike shop, including trade accounts, sales, bookkeeping and HR.

"Since my business partner left in 2014 I’ve been running Bicycle Links on my own. We now have eight employees (three female) and two premises. I’m pleased to say that the shop is what I always wanted - friendly and welcoming to everyone, whether you know all the technical terms or not.

I’m now 65 and stepping back gradually, letting the staff team manage the trading side while I concentrate on our social projects, including refurbishing bikes for refugees, unemployed people and children. I’m spending more time on the tools again, which is great. I’d love to see more women coming into the industry. We need more female mechanics and sales advisors as well as women riding bikes. Fixing a bike is just a huge buzz."

Lucy Hall was nominated for the 100 Women in Cycling by a colleague who said:

"Lucy set up Bicycle Links in Norwich nine years ago and has been running it ever since. She manages a very busy bike sales and repair workshop with seven staff; she also initiated many social impact projects to benefit the community, such as free or subsidised bikes for unemployed adults, refugees and asylum seekers, and children in disadvantaged families.

"The shop now has three female staff and opening up the industry to more women has been one of Lucy's big ambitions. Bicycle Links has always focused on utility cycling rather than sport and, because of that and the culture she encourages in the staff team, around 50 percent of the shop's customers are women.

"The projects that the social enterprise runs involve volunteers, and Lucy has tutored many of them to fix and refurbish bikes over the years. She is a role model for people - and especially girls - who don't expect to see a woman fixing bikes, and helps to break down stereotypes in cycling."

She is a role model for people - and especially girls - who don't expect to see a woman fixing bikes, and helps to break down stereotypes in cycling.