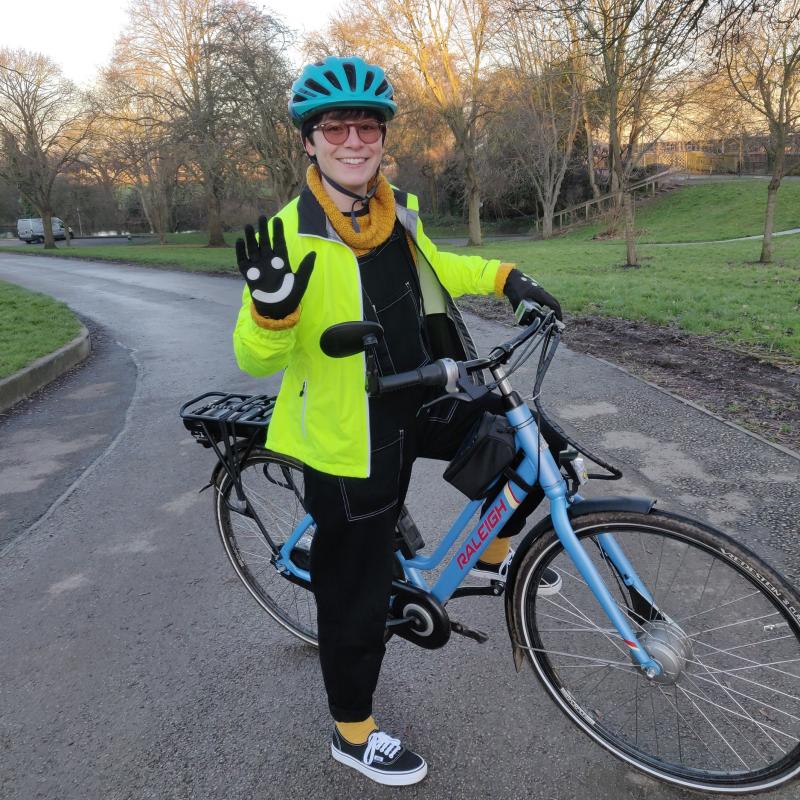 Founder of Spoke Out (Derby)

Cycling has always been part of Lucy's life, riding wherever she's lived, from the busy streets of Beijing to the dusty roads of Burkina Faso. Once settled and working in the cycling industry, Lucy noticed the sector was dominated by white males in positions of influence. This motivated her to set up Spoke Out, an inclusive collective to support and empower more women and non-binary people to cycle.

"I have cycled for as long as I can remember with my first proper bike being a boys' Raleigh Raptor as girls can like dinosaurs too! At secondary school I was the only girl who cycled so led a solo campaign for a bike rack which resulted in a shed success story.

"I have since gone on to cycle wherever I have lived – from a spray-painted bike on the busy streets of Beijing to yellow pedals on the dusty roads of Burkina Faso. I even spent three weeks cycling around rural France with a bike powered cinema one summer!

"I recently moved back to my home city of Derby, this time with a second-hand e-bike due to my disabilities, and spent two challenging years working in the very able-bodied, straight, white male dominated cycling sector.

"With so much focus on cycling because of the pandemic and the climate emergency, I am more passionate than ever about getting people on bikes but I quickly noticed the important decisions are being made by men, for men. But we make up over half of the population and our needs and views count, so I decided to set up Spoke Out, a friendly and inclusive cycling collective to support, encourage and empower more girls, women and non-binary people to cycle. Cycling means so much to me.

"My bike is how I get around, it is my stress relief, it is one way I help to protect our planet and it is now my mobility aid but above all, it is so much fun. I hope that through Spoke Out I can amplify and champion the voices of girls, women and non-binary people so cycling in Derby can be safe, convenient and fun for everyone."

Lucy Giuliano was nominated for the 100 Women in Cycling by David Shield who said: “Lucy brought a wealth of fresh air and new ideas to cycle campaigning in Derby. She holds unwaveringly to the principle that cycling should be a viable and appealing option for everyone, and has been a constant voice in support of groups who are currently under-represented in cycling and in cycle campaigning.

She holds unwaveringly to the principle that cycling should be a viable and appealing option for everyone, and has been a constant voice in support of groups who are currently under-represented in cycling and in cycle campaigning.

"Where, sadly, she has not received enough support from established voices in the local cycling community she has had the courage to strike out on her own and set up a group which is fit to campaign for this principle. I have great admiration for Lucy. I think she is an excellent role-model for what a cycle campaigner should be, and I think it would be to the great benefit of cycling if more people (especially those of us who fit into the "middle-aged, middle-class white guy" category) tried to learn from her.”

Lucy was also nominated by David Clasby who said: "Lucy is a fearless and dedicated champion in raising the voices of those under represented within cycling. Lucy is a tireless campaigner. She is willing to stand out and be counted, to challenge the accepted if it isn't working for everyone. At times this has taken its toll on her but she keeps coming back because it is the right thing to do and she knows no other way."