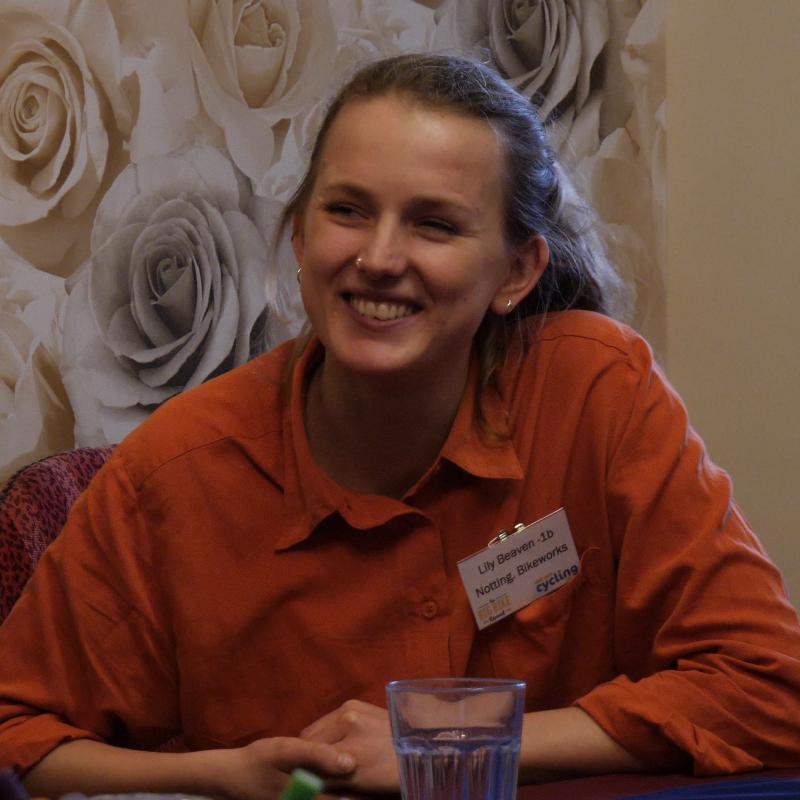 Touring solo around Taiwan on a hybrid made Lily feel that anything was possible and gave her the vision to create spaces for others to experience the joy of cycling. Women in Tandem supports women through mechanics and repair sessions across Nottingham. Lily also leads repair sessions through Cycling UK’s Dr Bike programme.

"I am happiest on my bike. Since I was a kid I’ve used cycling to get around and as a teenager it brought a new found independence.

"I was inspired to go on more adventures by my friend Izzi, who tragically died on her bike two years ago, but I’ll forever be pedalling in her memory.

"Touring solo round the coast of Taiwan on a hybrid with my backpack bungeed on the back made me feel anything was possible with the power of your legs.

I hope to create more spaces and opportunities for other people to experience the joy, freedom and power I get from cycling

"I hope to create more spaces and opportunities for other people to experience the joy, freedom and power I get from cycling.

"I am a keen advocate of cycling as a tool for empowerment, after working on various projects that give refugees’ bikes and organised regular rides for those suffering mental ill health I’ve set up Women in Tandem Notts, a CIC that aims to support other women through cycling.

"Aside from cycling around Nottingham, I teach bike mechanics, repair bikes across the city and always thinking of new projects.

"Whilst lockdown has kept me local for now, there are plenty of adventures on the horizon!"

Lily was nominated for the 100 Women in Cycling by many people.

Emma Lewis-Jones said: "She is incredibly driven and serious when it comes to getting women on bikes. She teaches mechanics, fixes up bikes, leads rides and has set up an all-women's collective in Nottingham that's the most affordable and accessible cyclists environment I have ever come across."

Noah said: "Lily is an absolutely amazing woman. She works with vulnerable people to get them cycling and generally just does amazing work for the community through giving them access to cycling. I've never in my life met anyone as enthusiastic and gorgeous about cycling in my life, ever. She's a fantastic woman that deserves recognition."

She is a bold, ambitious and friendly trailblazer

And Lucy Giuliano said: "She is a bold, ambitious and friendly trailblazer. Lily set up Women in Tandem in Nottingham last summer to get more women involved in bicycle mechanics, a field where women are very under-represented. Together with her business partner Steph, also a fully qualified bike mechanic, they run workshops to teach and empower local women to fix their bikes, as well as running community Dr.Bikes through Cycling UK's Big Bike Revival. Lily is always keen for initiatives to be community led and has really big plans for Women in Tandem which I'm really excited to see and hopefully be part of."