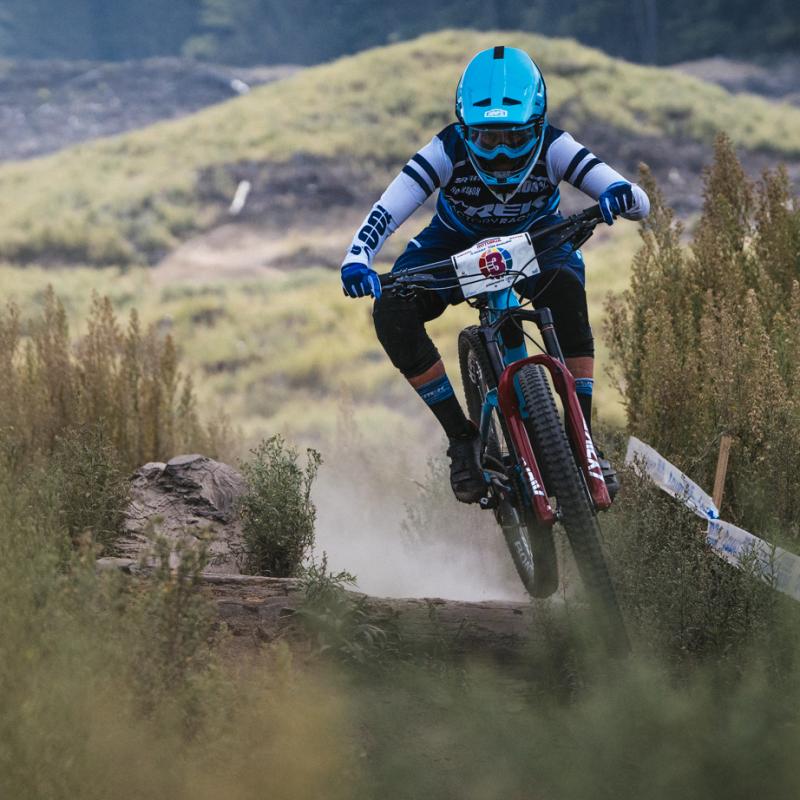 Katy Winton began her sporting career at 11 and had her eyes on the Commonwealth and Olympic Games. But after struggling with over training and feeling like she might want to quit she joined the newly created Enduro World Series and rediscovered her love of the sport.

“My Name is Katy Winton I’m 26 years old and a professional Enduro Racer for Trek Factory Racing Enduro. My Dad is a keen cyclist and is very passionate about mountain biking which he passed onto my brother and me. We would go for trips to trail centres across Scotland to ride, it was so much fun!

“As a competitive person, my mum and dad kept things fun for as long as possible but once I was 11 and deemed ‘old enough to take losing’ they let me do my first XC race. I absolutely loved it!!! Going up and down the hills as fast as I could was exhilarating! I was hooked!

“At 13 I was selected for the Scottish Talent team and moved through the British Talent teams and then onto the Olympic Development program with my eyes on the Commonwealth and Olympic Games.

“Over my younger years I achieved multiple British XC titles and Series wins along with gaining experience at XC World Cups and World Championships.

“A number of factors along with over training in the winter of 2012/2013 saw me starting the 2013 race season at the very edge of packing in the sport all together. It was the worst and hardest experience of my life as 2013 was the qualification year for the Glasgow 2014 Commonwealth Games and it was clear it was not going to happen.

“At the same time though the Enduro World Series was created and so I jumped in! We rode up hills and raced down various different DH stages, sometimes we even used chairlifts!! It was amazing to associate fun with bikes again.

Changing from XC to Enduro was the best decision of my life.

“I have podiumed in the Enduro World Series multiple times with a career best of 2nd place and have won multiple stages.

“In 2016 my passion became my job and I race for one of the biggest bike brands in the world! Unfortunately, in 2018 I had a concussion which went unresolved and in 2019, a few more head hits later, I missed three EWS rounds and spent most of the year recovering.

“The way that bike riding changed my life initially was when I was at school I was struggling with dyslexia - I was putting all this effort in but going nowhere and took AGES to do my work.

“But with bike racing, I could go FAST and it was the first time my effort got results not struggle. Bikes have given me: the freedom to escape into the hills and into nature and explore new places; have FUN; meet new people; it has and still does build my confidence as I overcome challenges on the trail; and with racing: it has given me a job and the opportunity to see the world and spread the bike love.”

Katy was nominated for the 100 Women in Cycling by Anna Glowinski who said:

“Katy Winton is a mountain biker representing the UK and Scotland on the world circuit of Enduro. She has managed a 3rd place in the Enduro World Series, trains incredibly hard and always spreads positive and kind messages on her social media."