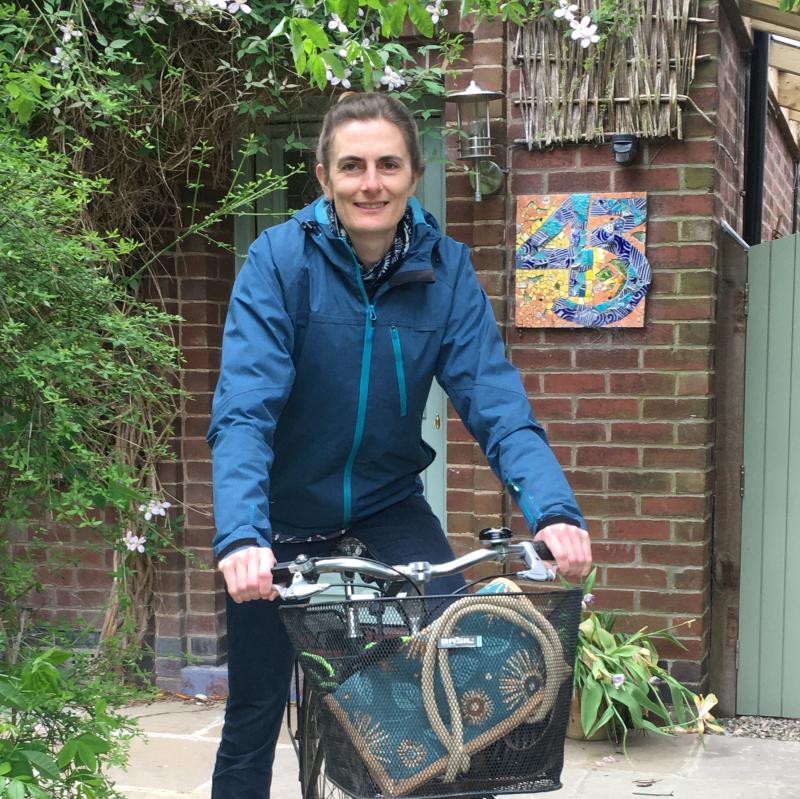 Co-chair of the York Cycling Campaign

After struggling to cycle around York with a young child and a partner living with multiple sclerosis who was struggling through awkward barriers Kate Ravilious realised that in order for everyone to enjoy cycling then better infrastructure was needed. She joined the York Cycle Campaign and is now its co-chair, bringing a female perspective to transport lobbying.

“Throughout my life I've owned a series of battered cycles, none of which have been cherished as much as they deserve. But from the age of five or so, following that exhilarating moment when I first wobbled off on two wheels, cycling has always been part of my life.

“Growing up on a remote farm on the North Yorkshire Moors cycling was my independence. My battered steed got me to school and back, gave me the freedom to meet up with friends and take on a much-needed Saturday job.

“At university my cycle saved me a fortune in taxi fares, zipping me safely home after a night out.

“Through my 20s my cycling languished, with big city life and terrifying traffic relegating the bike to the occasional Sunday outing. But it was a move to the small city of York in 2007 that reawakened my cycling spirit.

“Heavily pregnant and finding it painful to walk, I discovered that cycling was still a comfortable and convenient way of getting around, plus a nice form of gentle exercise. And York's enticing walk/cycle paths were exactly what I needed to regain my confidence.

“When baby arrived she quickly found herself perched on a seat on the back of my bike, and together we adventured far and wide, loving the feel of the wind in our hair and the ease with which we could travel across the city, avoiding traffic jams and the hassle of searching for a parking space.

But the more I cycled the more I started to notice the imperfections in York's cycle provision, and the inequalities that this generated

“But the more I cycled the more I started to notice the imperfections in York's cycle provision, and the inequalities that this generated. Cycling from one side of the city to the other had been fine whilst my daughter was in the child seat, but once she graduated to two wheels of her own it became impossible.

“Glaring gaps in the cycle infrastructure meant we couldn't get from A to B without encountering a busy road. At the same time my partner, who has multiple sclerosis, started to find it more difficult to keep his balance on a bike.

“Awkward barriers and busy intersections were curtailing his freedom and taking away his independence.

“These personal experiences made me appreciate that cycling is one of the most egalitarian modes of transport: with a decent cycle infrastructure virtually everyone can get around by bike (just look at the Netherlands for proof). It's cheap, it's easy and it doesn't generate traffic jams or air pollution.

“About three years ago I discovered the York Cycle Campaign. Together with a passionate and very knowledgeable bunch of people we've been able to challenge some of York's transport decisions and stand up for some of the people who don't normally have a voice.

...together we've been able to bring a female perspective to transport lobbying in York. We've still got a huge amount of work ahead of us, but there is change in the air, and I'm hopeful that by the time my kids grow up everyone will be able to enjoy the freedom of cycling.

“Last year I became co-chair of the campaign – sharing the role with the very talented Robyn Jankel – and together we've been able to bring a female perspective to transport lobbying in York. We've still got a huge amount of work ahead of us, but there is change in the air, and I'm hopeful that by the time my kids grow up everyone will be able to enjoy the freedom of cycling.”

Kate was nominated 100 Women in Cycling by Robyn Jankel, who said:

“Kate was only the second woman to join the York Cycle Campaign committee, and she has transformed the group.

“Her main focus is in making cycling accessible to everyone and safe for children, which in turn encourages more women to cycle as well.

“She is the force behind the campaign, coming up with new initiatives, writing press releases, creating and leading rides with councillors to show them first-hand the problems in the city, and pressuring the council to make changes both small and large.

“Although she shuns the spotlight, she is now the co-chair of the campaign and it is thanks to her constant and energetic efforts that it continues to have such an impact on York's cycling scene."