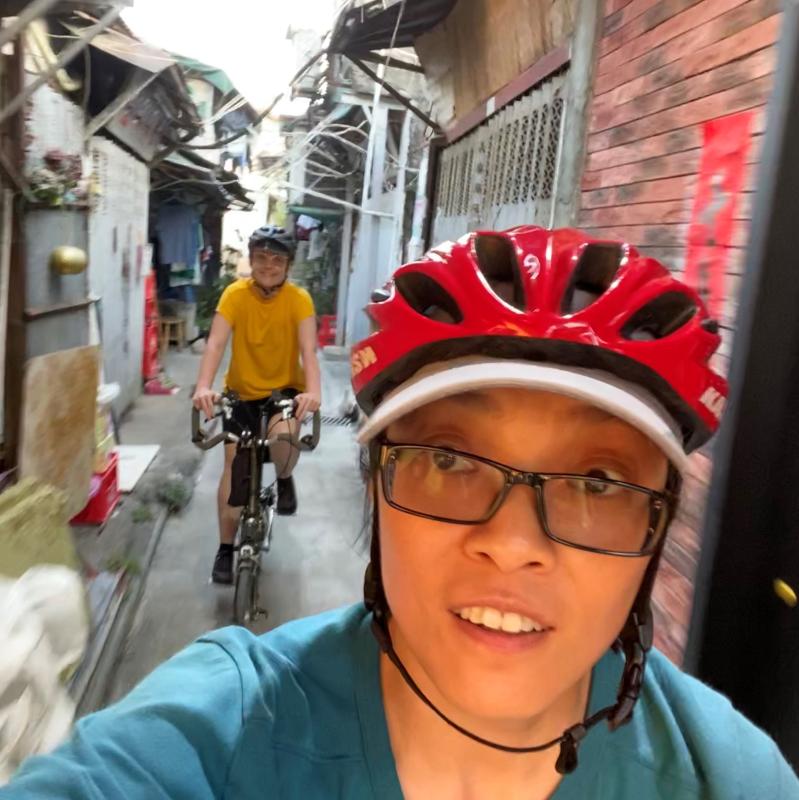 Ride leader and tourer, always on her yellow Brompton

Jenny started to commute by bike as a way to avoid the busy public transport system during the Olympics. Since then she has joined a cycle group and now leads rides and begun cycle touring. She now shares her love of cycling with others, particularly through working to boost the confidence of other women.

“When London hosted the Olympics in 2012, I was working between Canary Wharf and the City. The expectations were public transport would be overwhelmed with all the games spectators, so I decided to go get a bike to commute to work instead.

“At the time bike theft was on the increase and so I decided to get a folding bike. I eventually decided on the Brompton, more because it folded the smallest. Which was great for storage in a small London flat.

“After about a year of commuting I decided I wanted to cycle more for fun, I joined multiple cycle groups to build up my confidence on the bike and to discover new areas to cycle.

“The first club I joined was London Brompton Club (LBC), it was definitely a great place to learn more about the bike and things I could change to improve my ride. I have been leading rides for LBC since 2016, hopefully showing the versatility of the Brompton for all types of riding and supporting by organising maintenance courses.

“I have also been leading rides for Central London CTC since 2017, which initially would amuse other riders as I was always on my Brompton but now, they seem to have accepted me as family.

“I started my first bike tours in 2015, London to Paris (April) and Berlin to London (Oct). I was definitely hooked and loved the idea of cycling from town to town taking in the surroundings in a different way. I have now cycled in Germany, France, the Netherlands, Hungary, Scotland, Wales, New York, Hong Kong, China, Belgium. Whenever I travel now, I will always look at options of taking my bike, as there is no better way to visit a place than cycling.

Whenever I travel now, I will always look at options of taking my bike, as there is no better way to visit a place than cycling

“One huge achievement was to cycle up Mont Ventoux. I was definitely not the fastest or the first on a Brompton, but I received a lot of bike love for attempting the climb on small wheels. However smaller things like learning how to repair my own punctures, though not as spectacular as climbing a mountain, has improved my confidence and allowed me to be more independent on my bike.

“I could not have imagined how much my life would change and be shaped when I first bought my bike in 2012! Yes, I knew I would save money on my commute and hopefully get fitter as part of the process. But it’s the close friends I have made over the years, the cycling community is truly a huge family of support. The adventures I have been with family, friends and alone.

“I now try and pass on the bike love by encouraging all levels of cycling, especially women in cycling. I always remember when I first started cycling, I was not confident, and everything felt very new and strange and it was the kindness of others which helped me.”

The person who nominated Jenny for the 100 Women in Cycling said:

"Jenny leads most of the London Brompton Club rides. She encourages women (and men) to ride (any kind of) bikes and is very supportive of others.

"Jenny is willing to share her knowledge of cycling and has an inclusive approach when organising events and activities.

"Jenny is also a member/ride leader for Central London CTC and participates in I Bike, Critical Mass and Friday-night rides to the coast.

"Whether its climbing Mont Ventoux or doing the Isle of Wight randonnée – Jenny did it on her yellow Brompton, often leading the rest of us."