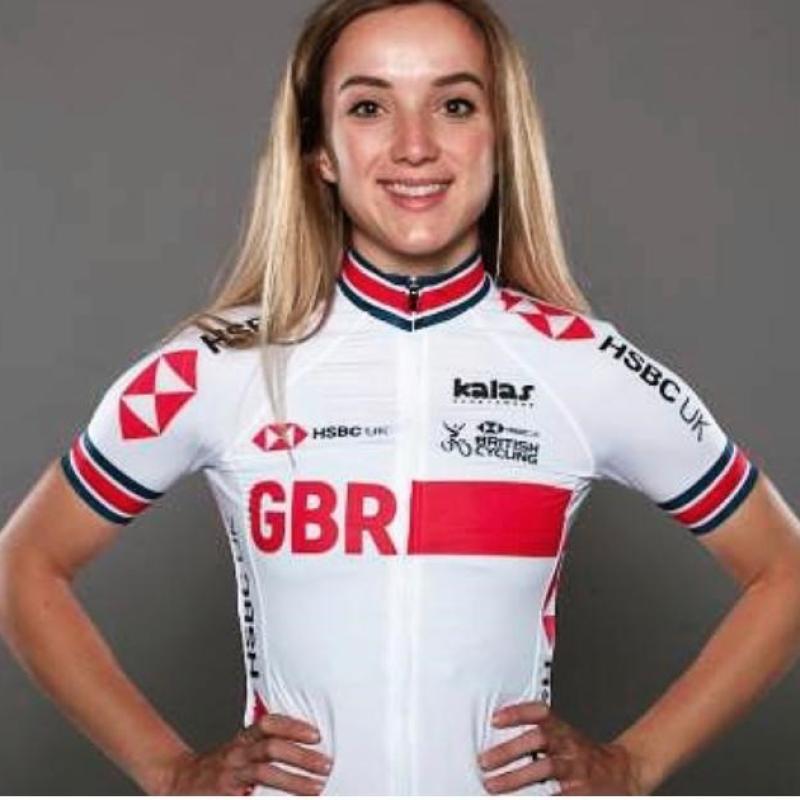 The Olympic Games didn't go ahead as planned last summer but that didn't stop Elinor from progressing her successful cycling career. In 2020, in Berlin at the Track World Championships, Elinor won gold in the points race. She also returned home with three medals from the European Track Championships, including two golds in the elimination race and the team pursuit (with bronze in the madison). Looking ahead, Elinor is preparing for more success in Tokyo this summer.

​Elinor was also voted as the 2012 BBC Wales Junior Sportswoman of the Year, she received a nomination for 2016 and 2018 BBC Wales Sports Personality of the Year and received an MBE from the Queen in the New Year Honours 2016.

"My earliest cycling memory is learning to ride a bike on the street outside my parents’ house on an old hand-me-down bike which had been used by all my older siblings – I absolutely loved it.

"When I was 10 years old, I got involved with the Maindy Flyers cycling club. I think Maindy was a huge factor in where I am today. I was a sporty child who was into lots of different sports, and whilst I did ride my bike a lot, it was not my only interest. I think if it hadn’t have been for the community at Maindy, and then facilities I had access to, I don’t think I would have taken up cycling to the level I have done.

"The first session (with my younger sister Megan) was just us, as everyone else was racing at Nationals – so we basically had a one-on-one coaching session! We learned so much and were able to make mistakes without embarrassing ourselves in front of everyone who knew what they were doing!

"Maindy was the basis of my cycling, and I started to show some good performance, so with the support of the club and Welsh Cycling, there was a clear progression for me. At U16 I was a junior rider and we started heading to Belgium and Holland for races, and as I progressed to the senior ranks, Welsh Cycling funded a track team which was amazing and we travelled the world going to World Cups – this gave me the experience I needed in a low-pressure environment, so a huge confidence builder for me.

"Things rapidly moved in my career with some racing on the road, and then focussing on the track for the 2016 Olympic Games in Rio where I won Gold in the Team Pursuit and we also broke the World Record. Tokyo is next…"

Things rapidly moved in my career with some racing on the road, and then focussing on the track for the 2016 Olympic Games in Rio where I won Gold in the Team Pursuit and we also broke the World Record. Tokyo is next

Last summer, with the Olympics postponed so we took the opportunity to chat with Elinor Barker and Katie Archibald, both previous Team GB champions who were set to head out to Tokyo to fly the flag for the nation. You can catch up with the evening that Anna Glowinski spent chatting to the track cycling superstars.

Watch for a glimpse into the lives of two of Britain's top cyclists, how they coped with lockdown and changing training plans - as well as playing them off against each other in some seriously competitive activities.

Elinor was nominated for the 100 Women in Cycling by several people.

Emma Wade said: "Not only has Elinor achieved over and over again on the sporting field (she was last year's only able bodied world champion track cyclist from Team GB and will head in to this year's Tokyo Olympics as such) but she uses her platform to support mental health charities and initiatives, is passionate about encouraging others to reap the benefits of cycling at all levels and recently became the first ever guest editor of Cycling Weekly magazine. She used the platform to showcase her vision of the future of coverage of women's sport where the stories of those women achieving in the sport are covered in the same way and as much as men's."

Not only does she have the hunger to compete and be ultimately the most successful she can be in her field, she is passionate about the sport of cycling and everything that it does to benefit the nation

Maz Hedley Lewis said: "Elinor is a huge role model for cyclists, in particular females. Not only does she have the hunger to compete and be ultimately the most successful she can be in her field, she is passionate about the sport of cycling and everything that it does to benefit the nation. She is interested in cycling as a lifestyle and a passion and also about nutrition and culture around the sport.

"Recently, Elinor was the first person to ever guest edit an issue of Cycling Weekly magazine, which was a honour to see. She worked on the issue with passion, with fight to show and hero women in the industry and see her thoughts and opinions roll out over the pages of the magazine having inspired and created some excellent features for everyone to enjoy."