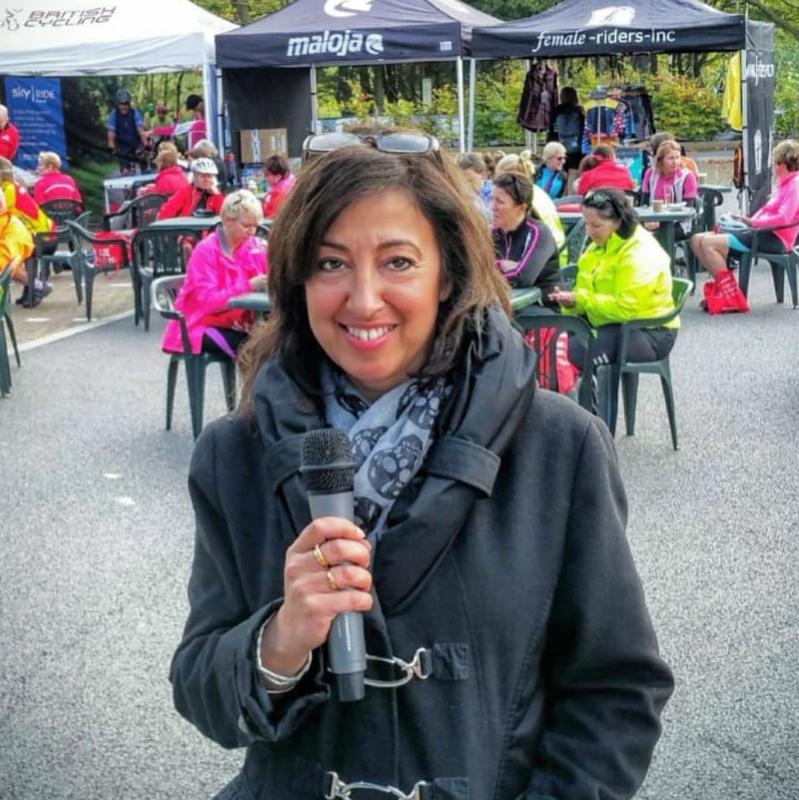 After being diagnosed with breast cancer in 2008, Diane decided she wanted to get in shape to be able to battle her cancer. Inspired by Lance Armstrong she started cycling every day that she had radiotherapy. Next she joined her local Breeze group and is now a Breeze champion and ambassador, and she has started to work as a cycling event commentator.

“I never had a bike as a child, so I used to pinch my brother’s bike to learn to ride, and subsequently wasn’t that confident due to not enough time in the saddle.

“I then married into a cycling family, my husband had a bike shop and his family promoted the men’s National Road Race four times in the 1980s and 90s. I loved watching cycling, but didn’t ride until I was diagnosed with breast cancer in 2008. I felt I needed to get fitter to combat ’Cedric’ and to ensure he wouldn’t return.

“For each of my 25 radiotherapy sessions, I decided to do 30 minutes on the turbo, giving me 12.5 hours of exercise that I wouldn’t have ordinarily done.

“To begin with, to ride to the end of our lane and back was a huge achievement. I’m now a 100km girl when I’m fit.

“Before my cancer diagnosis, a gang of us used to go to an amazing bike hotel in Emilia-Romagna. To start with, I was a cycling widow, but post cancer I started riding on holiday too. I loved the scenery (but not the endless hills) and camaraderie of a bike ride and sharing good food and stories afterwards.

“After redundancy from my senior banking position in 2013, the hotel owner invited me to work there for the autumn bike season to do “Blah blah blah with the guests and accompany them on bike rides.” I didn’t need asking twice!

“I would accompany the slower, shorter, rides and loved the feeling of pride and sense of achievement when a customer thanked me for encouraging and for looking after them.

I qualified five years ago, and still get the same buzz after a ride now when I see ladies’ confidence and competence increasing with each ride

“The natural progression for me was to become a HSBC UK British Cycling Breeze champion. I qualified five years ago, and still get the same buzz after a ride now when I see ladies’ confidence and competence increasing with each ride.

“Husband Nick is an event organiser and commentator. Together we promote quirky events such as the Newport Nocturne and the Queen Victoria Cyclocross. I started assisting out on the mic when he needed a break and now, I get employed too.

“I use this as an opportunity to champion getting people on bikes and will always be heard talking about British Cycling’s Go-Ride programme, plus Breeze and club riding whenever I can get a mic in my hand.

“I compered the three Breeze Challenge wome- only sportives, which still rank as some of my favourite events ever. British Cycling heard me talking about my cycling and health journey and invited me to be an ambassador for the “Breeze Inspires” campaign, alongside several inspiring individuals with their own stories of how they got into cycling and Breeze.

“Another favourite gig of mine was hosting the VeloVixen Women’s Cycling Hub at the NEC Cycle Show where I had the opportunity to interview a plethora of wonderful world and Olympic champions and other inspiring ladies.

“I’m extremely passionate about getting bums on saddles. I’m an enthusiastic advocate for the kids in Newport Shropshire CC’s Bike Club, but my real passion is for women’s cycling.

“I’m truly fortunate to be able to have the platform to be able to encourage people to ride. Nowadays my circle of friends are mainly cyclists, we don’t take it too seriously, we love sharing the simple joy of a bike ride with mates. I know that fresh air and green spaces are so good for not just the body, but the mind too. Oh, and cake, there’s always the joy of guilt-free cake.”