Author, former bike messenger, long-distance cyclist and co-founder and director of The Adventure Syndicate, Emily Chappell is from Llanidloes in Mid Wales. She has been cycling up and down Welsh hills since she was small, so we asked her to share her favourite routes

When people ask why I enjoy climbing so much, I tell them I grew up in Mid Wales, where there’s little point in riding a bike if you don’t like going uphill. Almost every road leaving Llanidloes – my hometown, near the head of the River Severn – has a chevron on it, and I decided early on that, if I was going to live here, I might as well enjoy the ups and downs, rather than constantly moan about them.

As my travels have taken me further afield, to the great mountain ranges of Asia, Europe and North America, I’ve never found an uphill stretch of road that didn’t fill me with relish. Although the climbs of Mid Wales can’t compare to the Alps, Pyrenees or Himalayas in length, their steep gradients and occasionally uneven surfaces have given me the ability and sheer physical strength to soar over mountain passes on several continents.

No mountain pass ever seems quite as hard as the moss-covered 15% pitch leading up to my house – the most daunting part of every ride – or the steep gravel roads that access the wind farm at the end of the valley, a couple of which I’ve never yet managed to ride up without putting a foot down.

I firmly believe that this is one of the UK’s best regions for road cycling. Mid Wales has an abundance of tiny, winding lanes that wiggle up and down over endless rolling hills

I firmly believe that this is one of the UK’s best regions for road cycling. Mid Wales has an abundance of tiny, winding lanes that wiggle up and down over endless rolling hills.

But what really sets my homeland apart is the quietness. If roads this good existed within 50 miles of London or Bristol you wouldn’t be able to move for Lycra. Here in Mid Wales, though, it’s so rare to see another cyclist that you greet each other with broad grins. Even cars are rare.

When I moved back from London a few years ago, the first thing I did was go out on my bike. After a couple of hours I realised I hadn’t passed a single vehicle, and began to worry that the road had been closed – perhaps I wasn’t supposed to be here? It was another 20 minutes before a couple of Landrovers passed me, their occupants waving and smiling as no urban 4x4 driver ever would, and I understood that I was supposed to be here, and I had the whole place to myself.

There’s a game I play with myself, where I try to cram the maximum amount of climbing into the shortest possible ride, and this ride is one of the winners, with an average 22m vertical ascent for every kilometre pedalled. I reckon it also holds the record for the most beautiful scenery per pedal stroke.

The moment you cross the bridge and follow signs for the mountain road to Machynlleth, the sharp climb up out of the Severn Valley begins. Don’t be alarmed by the thought of a mountain road – we’re not going there today, though in a few minutes you’ll wonder why the road you’re on doesn’t deserve that appellation.

A sharp left-hand bend takes you down into the Clywedog Valley, then immediately up again on a steep winding lane that skirts the deserted Bryntail lead mine – worth a look if you’re interested in deserted buildings or 19th-century industrial architecture. Go past a viewpoint overlooking the Clywedog dam – also worth a look, and a welcome opportunity to get your breath back while pretending to enjoy the view – then above the tree line, over a cattle grid, and up to a summit that feels like the top of the world.

From here you can admire miles of Welsh hills rolling away beneath you, and the spectacular reservoir, created when the River Clywedog was dammed in the 1960s. Several homes and farms were submerged in the process, and there are still people in Llanidloes who remember growing up in the valley that is now underwater – something which always fascinated me as a child.

The road takes you downward, but not for long – this is one of those delightful routes where the height you gain is never kept for long. Looking at the map you’ll see why – the lake’s twisted shape follows the contours of the hills that surround it, and the road has no choice but to do the same.

There’s a brief flat section on the western shore, before you climb back into the Hafren forest, past the viewing hide for the local osprey family (they’ve been breeding successfully for five years now). Turn right at Staylittle and follow the rollercoaster B4518 back to Llanidloes for a well-deserved slice of cake at the Great Oak Café. 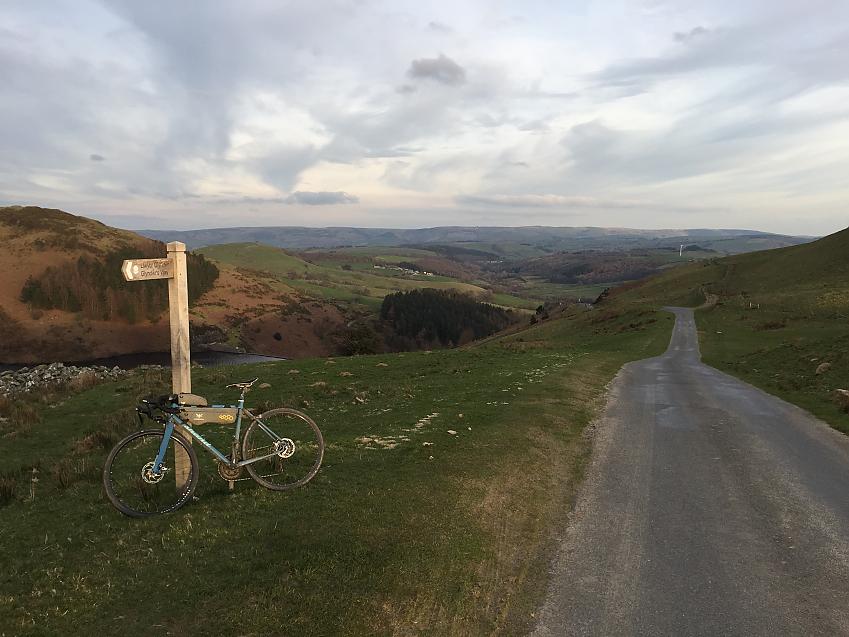 Stop and take in the lovely views at Clywedog. Photo by Emily Chappell

This A to B route is a great excuse to make use of the tiny and picturesque Heart of Wales line, which runs from Shrewsbury to Swansea. It claims to be Britain’s most scenic railway and frequently surprises me when I come across its stations in places that feel like the middle of nowhere.

Trains run a couple of times a day, and many stations are request stops, but that only adds to its charm. It also gives you the opportunity to find a nice pub or B&B in Llandovery, while you wait for your ride home.

From Llanwrtyd Wells, home to the World Bog-Snorkelling Championships, you’ll follow a quiet leafy lane towards Abergwesyn, before the road ramps up through magical mossy woodland and delivers you into a deep U-shaped valley. Here, the River Irfon is overlooked by craggy hillsides and a perfectly tarmacked road leads you inexorably towards one of Wales’ most celebrated climbs: the Devil’s Staircase.

Get into your lowest gear the moment you see the 25% sign. Once you’re across the cattle grid, the road starts steep and gets steeper, and I’ve seen many strong cyclists reduced to walking within the first few metres.

If you can make it round the second hairpin you’ll probably be OK. It’s worth pausing here to admire the view back down the valley before shooting down the equally steep descent. Turn left to enjoy magnificent views of Llyn Brianne as the road twists and turns its way across the hillsides before a gentle descent along the River Towy into Llandovery. 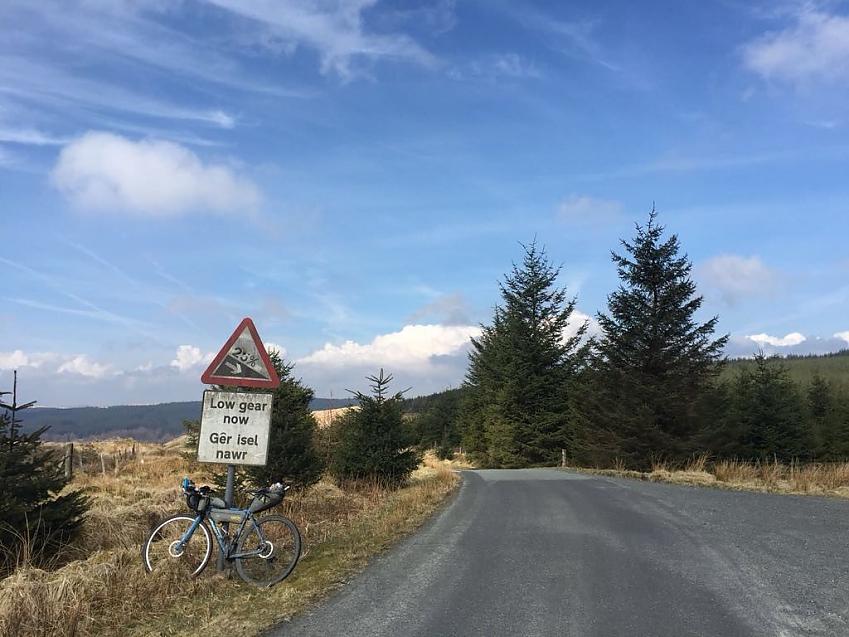 I’ve found no other route where the scenery varies so much in such a short distance. By the end of the ride you’ll feel you’ve travelled much further than 50 miles.

Starting in Llangurig near the head of the River Wye, you’ll quickly climb up into the middle of nowhere, passing wind turbines and Highland cattle as a gravel path takes you down to Cwmystwyth.

You’ll already feel like you’ve covered many miles by the time you reach Devil’s Bridge, so stop for a scone at the Hafod Hotel. Look out for steam trains at the station – this is the eastern terminus of the narrow gauge Rheidol Railway – and get ready for the long steady climb up to Ffair-Rhos.

A left turn takes you onto a tiny road that wouldn’t look out of place on the west coast of Scotland (though of course I’d rather be here), as it wriggles its way up and down through the vast golden expanses of the Cambrian mountains, overlooking the shimmering Teifi Pools.

There’s an excellent bothy just north of the pools – hard to find, but worth it when you do – making this the perfect route for an overnight adventure. From there you’ll descend, via Wales’s finest gravel road, around the beautiful Claerwen reservoir, before rejoining the tarmac and and enjoying a swift descent past the Elan Valley’s Victorian dams to Rhayader. I’ve often breakfasted at the Old Swan Tea Rooms after a night in the Claerddu bothy.

From here it’s 10 miles or so along the Wye back to Llangurig, following a tiny undulating lane that smugly avoids the A470 on the other side of the valley, as craggy cliffs give way to farmland. 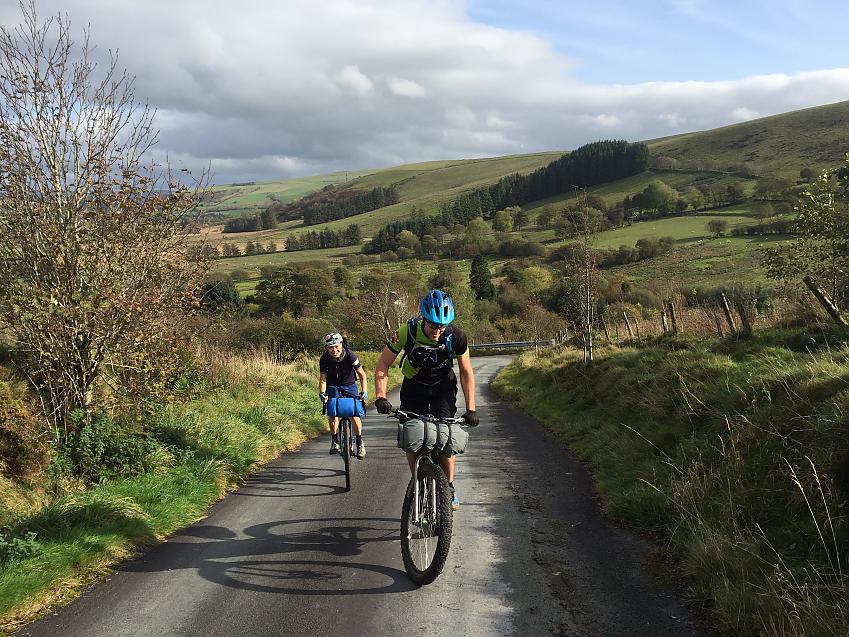 Cyclists in the Elan Valley by Emily Chappell

Mid Wales is full of unexpected treasures, tucked away in tiny villages and hamlets where, at a first glance, you’d think there was nothing going on. This ride showcases some of my favourites.

You’ll start and finish in Llandrindod Wells, a tiny Victorian spa town that is improbably the home of the National Cycle Museum, and another stop on the Heart of Wales Line. From here it’s a gentle roll out to Rhayader, before beginning the steady climb up towards St Harmon.

There used to be a Roman fort here, and I often imagine how the soldiers there must have felt, shivering on these bleak hillsides and longing for the Mediterranean sunshine.

You’ll find one of my favourite cafés at the high point of this ride. The village hall in Bwlch-y-Sarnau lost its funding a couple of years ago, and to keep it open the locals set up Glyndwr’s Way Café, serving cakes and cream teas to walkers, cyclists and horse riders who pass by on the Glyndwr’s Way Trail.

Apart from selected summer weekends the café is only open on demand, so make sure you get in touch and let them know you’re coming – there are few friendlier cake stops.

As you descend you’ll pass through Abbeycwmhir. This tiny village boasts a ruined Cistercian abbey, a stately home with magnificent gardens and the Happy Union. The last is an old drovers’ inn that, despite its remote location, still manages to do a roaring trade and offers a very warm welcome should you happen to stumble in there after a cold wet ride, as I often have. 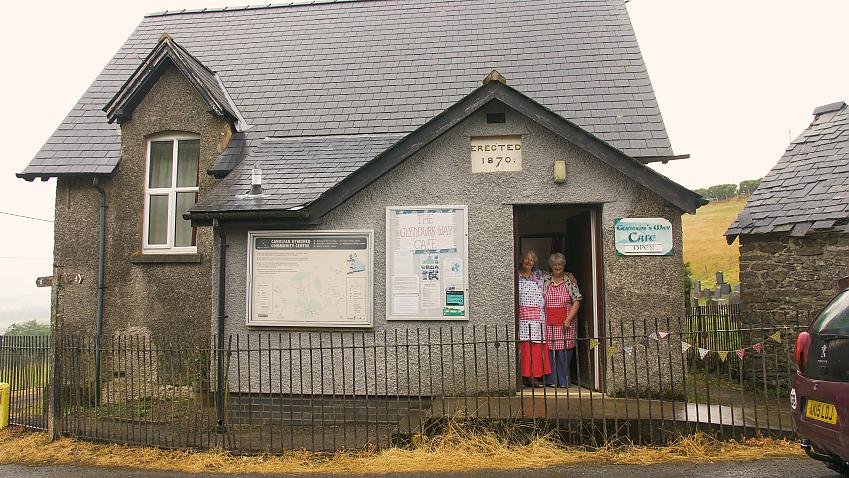 This ride takes in what I humbly believe to be two of the UK’s best climbs: the famous Bwlch-y-Groes (more colourfully known as Hellfire Pass) and the lesser-known mountain road between Machynlleth and Staylittle.

The latter climbs from sea level to 500m in 10 miles, steepens painfully towards the top and passes Glaslyn. This remote mountain lake that was the site of my very first cycle-camping trip, with my father, when I was seven.

From here you’ll descend to Llanbrynmair. Machinations, with its rabbit village and collection of moving models, will be one of your more memorable coffee stops. Then head north along a tiny lane, which you’ll love until its final eye-wateringly steep section up to the A458.

As I follow the lane from Dinas Mawddwy towards the dreaded Bwlch-y-Groes, I still sometimes feel as though I’m heading for a dead end. I start to wonder where the road could possibly be that will take me out of this increasingly steep-sided valley. Then I see it, and I remember…

A mile or so of unrelentingly steep tarmac, overlooked by a magnificently corrugated cliff face. All of a sudden you’re in a very different world, catching your breath as you gaze out over the peaks of Snowdonia.

From here I usually descend to Lake Vyrnwy for tea and a scone at Artisans coffee shop. You can hire bikes here, and there’s a very nice flat loop around the lake, should you fancy something less taxing. Then it’s a pretty – and mercifully gentle – climb over to Llangadfan, a brief blast along the main road, and another leafy lane ushers you along the Dyfi valley, back towards Machynlleth and the coast. 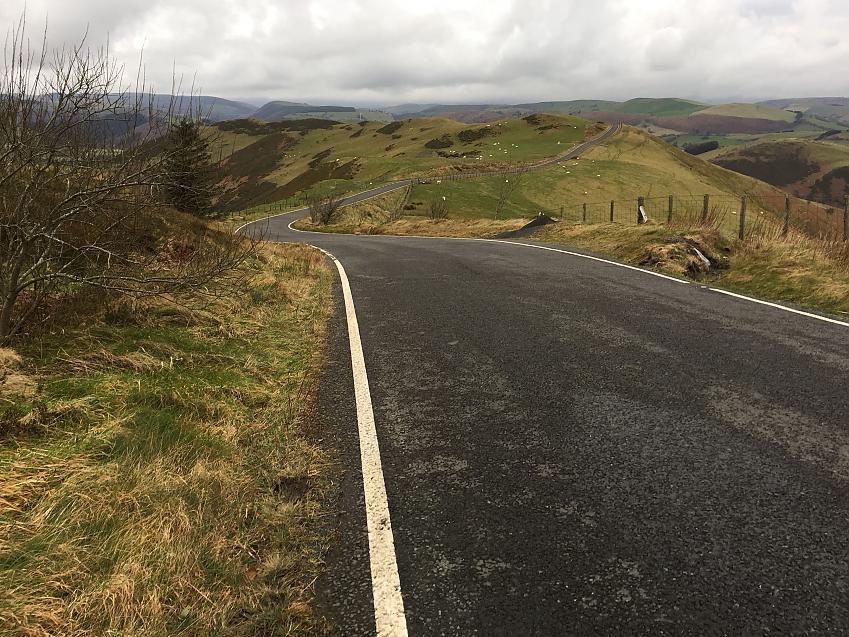 If you want to look at the routes in more detail on a digital map, there are GPX files that you can download at the end of this article. Alternatively the routes are included in our 140 birthday routes.