Carol Hutchinson was 54 when she learnt to cycle for the first time, but since those first attempts last August, she hasn't looked back

Last Sunday, Carol joined thousands of others taking part in the World's Biggest Bike Ride. The trio of Carol, partner Gary, and son Michael rode for over three hours along the River Mersey in glorious sunshine, logging over sixty miles in the process. Amazingly, this time last year Carol didn't know how to ride.

Carol grew up in Manchester with her brother who was seven years younger than her and like many other kids from the 1970s, he had a bike, but Carol didn't, and never learned how to ride one. By the time, her brother was learning to ride, Carol was now in her teens, and although a friend tried to teach her how to ride their bike, the only memories Carol retained involved falling off quite a bit, and that would be it for the next 40 years.

Before the coronavirus pandemic, self-employed Carol made and sold leather crafts. Her business was on hold for several months last year while she was home-schooling her son.

With more time at home, Carol got into the habit of walking daily in nearby Alexandra Park. She would often take 11-year-old Michael over on his bike, and she began noticing how many other families were riding around the park together and how much fun it looked. "I remember thinking how nice it would be to ride with my son, but left it at that," she said.

In August 2020, the tyres on her son's bike kept deflating and needed attention. Luckily as she was heading into the park, she saw mechanics from Cycling-UK affiliated Community Cycling Club Bike Hive setting up, and they fixed Michael's bike the same day.

A few weeks later, while walking through the park again, Ian Donnelly, the Bike Hive mechanic who had fixed Michael's bike asked if she would like to join in with the social ride being held that morning.

What a feeling when I stopped pedalling and looked round to see how far I'd travelled alone. From that moment I was hooked

"I admitted that I didn't know how to ride a bike, and straight away he asked if I would like to learn," Carol explained. "I reluctantly agreed and within a few minutes I was able to ride away independently. What a feeling when I stopped pedalling and looked round to see how far I'd travelled alone. From that moment I was hooked!

"After that, I couldn't wait to have another go. I attended every social ride day, practising in the park on my own and with Ian as my instructor. After a couple of sessions, he suggested we head out to the Loop, a traffic-free area used by walkers and cyclists close to the park that was great for beginners."

For Carol, this was her first experience of how cycling can reveal those 'hidden' places that car drivers rarely see. Since then, she has enjoyed exploring the Bridgewater Canal, and enjoying seeing the nature living there; swans, ducks and geese with goslings.

A couple of months after learning to ride, she became a volunteer with Bike Hive: "I wanted to help in any way that I could as a thank you for teaching me to ride," Carol said. At one of the volunteer meetings, the opportunity to complete a Cycling UK Ride leader course was discussed, and the instructor put Carol’s name forward. She was surprised but determined to do her best and pass the course when the time came.

After entering a second lockdown in November 2020, group social rides had to stop. With the streets quieter than usual, Carol ventured out exploring on her own, riding along familiar and unfamiliar streets to build her confidence. "It was amazing," she said. "I was riding a bike, something I thought I would never be able to do."

Under the new guidance, it was still possible to ride with one other person, provided social distancing rules were followed. Carol contacted her friend Mary from the group and the pair rode out to a local canal path, "I was blown away, it was so beautiful I found myself stopping to take it all in. I had no idea that places like this existed so close to where I live. I needed to see more."

As the weather began to get colder, Carol continued to ride with Ian going out in the daytime and then the evening, riding in different conditions: rain, sleet, ice and just plain freezing. "I was really enjoying myself, even when my hands were so cold I thought they'd never be warm again, I still wanted to be out learning, exploring and having fun," she said.

Then in January 2021, her progress was interrupted when Carol suffered a devastating loss. Her father died of kidney failure and her household was required to self-isolate for 10 days. They were unable to see any of their family and friends while they were grieving.

"It was more than a month before I could get back on my bike," Carol explained. "When I did eventually go for a ride, I felt rusty and out of sorts, but it was a chance to think about something else and I soon began to enjoy it. Mindful that the Ride Leader training was still pending I threw myself into improving my cycling skills and venturing out to explore new places that other riders might find interesting." 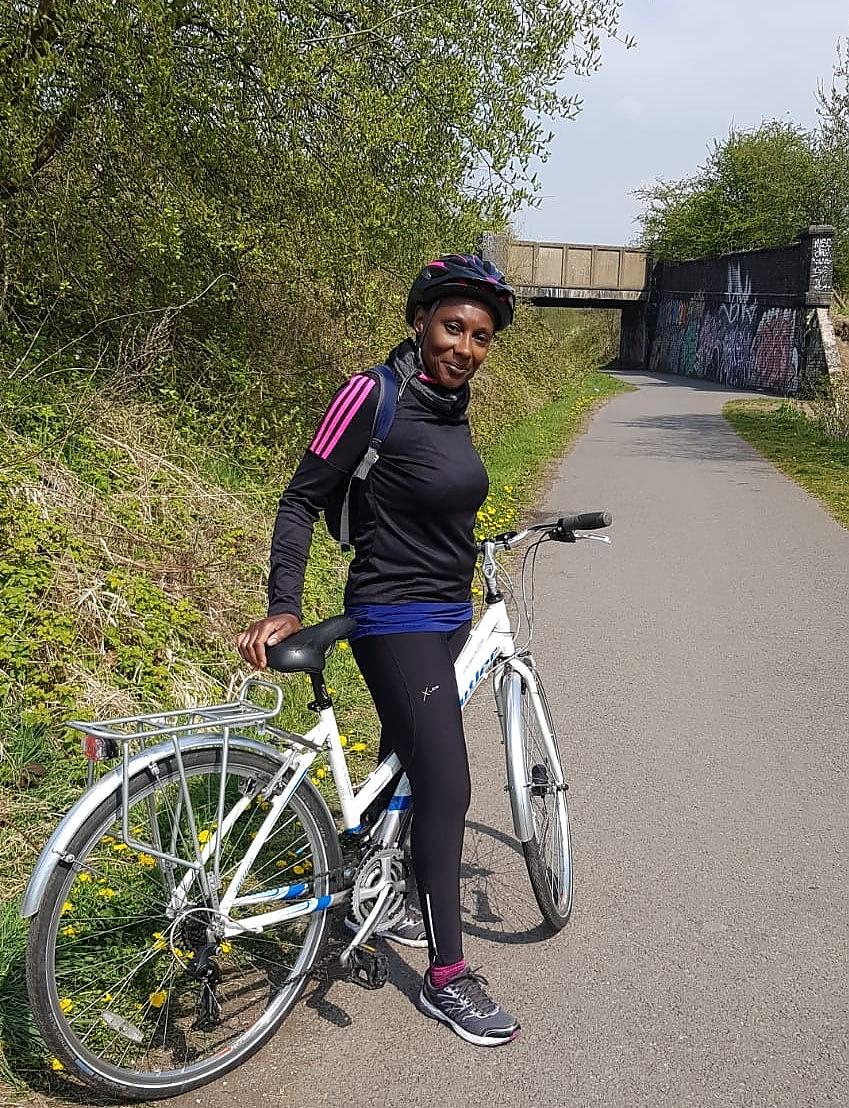 Finally, the date for the Ride Leader training was announced. Carol completed all the modules, and when the practical training day arrived on 7 May she was nervous, but hoped she had prepared well.

Less than a year after learning to ride, Carol passed her Cycling UK Ride Leader training.

She said: "I have gained so much from cycling. I'm happier when I'm out on my bike. I feel free. I feel healthier, my fitness levels have improved lots. Generally, I feel more confident whether I'm riding down the road in the mix with traffic or greeting fellow cyclists on the canal path."

Carol said she was grateful for the kindness and welcome she had received from Bike Hive who provided refurbished bikes for both Carol and Michael. She is also grateful to another Manchester group LadyPedal who loaned her a bike when she didn't own one.

Carol lives in Moss Side, an area of inner-city Manchester where many residents don't have a lot of money to take their bike to be repaired at bike shops in more affluent areas, so she says the fact that Bike Hive offer services for free or in return for a small donation and are based in the local community helps them reach a range of people who might find price a barrier to starting cycling.

Carol's passion for cycling has spread within the family, her partner Gary who hadn't cycled for 30 years, got himself a bike in December and now rides every day, often to tend to his allotment.

It also gave her an opportunity to spend quality time with her son. Carol said: "My son loves to play tennis too and when he was younger, I used to play with him and help his training. He has progressed to county level now and so we don’t play together as much, so it was nice to find another activity like cycling that we could do together. I feel like I’ve made him proud, going from not being able to ride a bike last year to now taking and completing ride leader training, He can’t believe how far I’ve come and now I can take him to nice places to cycle.

"I'm really looking forward to the three of us going out as a family to some of the amazing places I've discovered on my journey from learner to Ride Leader," Carol said.

All of this wouldn't have been possible without Ian who clocked up the miles with Carol and started her on the cycling journey with the asking of a simple question 'would you like to learn?'

Inspired by Carol’s story? Find a community cycle club near you to find out more.

Inspiring cyclists: How volunteering as a ride leader helps health and confidence View
Cycling UK continues to support the UK to cycle
This remains true during this difficult period with the ongoing threat of coronavirus Covid-19
Read our latest advice on cycling