It's been hard to settle on an accurate level of optimism for cycling lately.

We've just welcomed the fact that a date has been set for Westminster MPs to debate the findings of the 'Get Britain Cycling' report - an important development as not only had we been suffering from serious disappointment that the Treasury forgot about cycling in the Spending Review, but we'd also found that the risk of cycling appears to be going up.

It's good, then, that most Police and Crime Commissioners gave our first Road Justice report a positive reception; that the Department for Transport has said that the major road network is to be 'cycle-proofed' in future; and now we're eagerly anticipating an announcement about cycling from PM David Cameron in August.

Indeed, we like to think that happier times for funding are round the corner and that in next month's Digest, we'll be able to report that the outlook for cycling is brighter as a result. The ladies on the right are happy at the prospect, as well as enjoying a summer cycle ride.

If you'd like to be notified whenever the latest CycleDigest has gone online, become a subscriber. 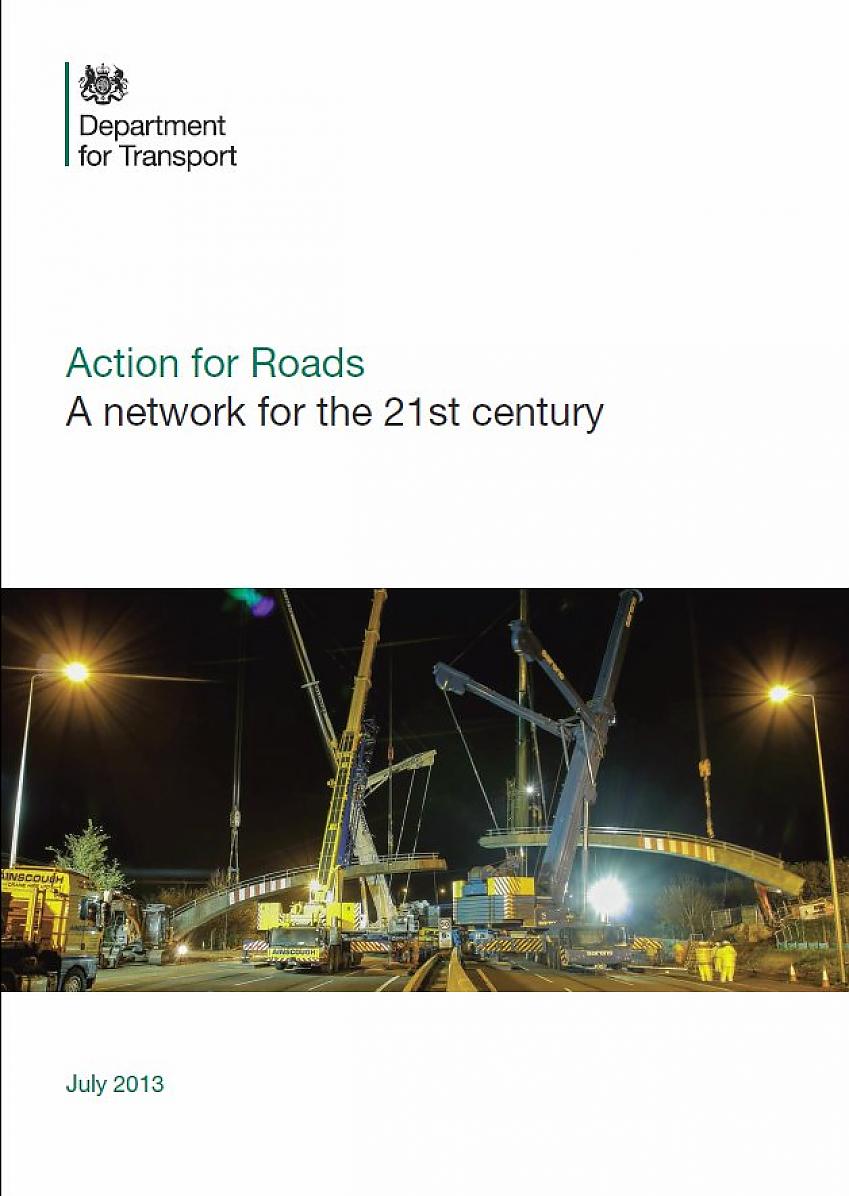 Despite huge numbers of signatures - almost 70,000 - on a petition in support of Get Britain Cycling, the outlook for a funding boost looked bleak at the end of June. The Chancellor and his Chief Secretary made statements that promised £billions for extra road capacity and the HS2 rail link, but failed to promise anything specifically for cycling.

The prospect of large road schemes is always alarming because they can be detrimental to cycling by, for example, severing routes.  These worries have been somewhat allayed by ‘Action for Roads: a network for the 21st century' from the DfT, which mentions ‘cycleproofing’ the major road network (England) and correcting "historic problems."

It seems, though, that more positive news may be on the way – according to The Times, Number 10 has confirmed that Cameron will make an announcement on cycling in early August. The winners of the Government's Cycle City and National Parks Challenge funds are also still awaited.

Get Britain Cycling to be debated in Parliament

On 2 September, the Chamber of the House of Commons will be the setting for a high profile debate and vote on the findings of the Get Britain Cycling report.

The report, published by the All Party Parliamentary Group on Cycling (APPCG) in April, compiled evidence from a wide variety of cycling experts, including representatives from CTC.

To turn Get Britain Cycling's ambitions into reality, political commitment is crucial and we hope that Parliament will lead the way.

In August, we’ll be rallying supporters to get in touch with their MPs about the debate once we know what the PM has said (see story above). 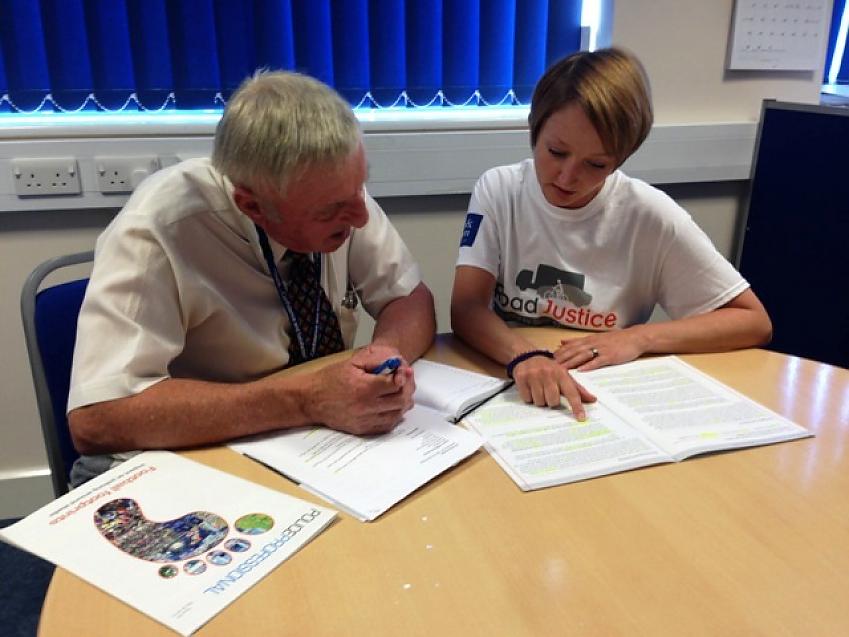 On 11 July, CTC campaigners and victims of cycling road crashes met with Police and Crime Commissioners (PCCs) across England and Wales to hand in the first of CTC’s Road Justice reports.

The report examines how roads policing needs to improve to keep cyclists safe and ensure that irresponsible drivers are brought to justice.

On the whole, PCCs were very welcoming - they took the time to find out more, be photographed and hear the personal experiences of CTC members. (Photo: Sarah-Charlotte Peace with West Mercia's PCC, Bill Longmore).

CTC’s  Road Justice campaign, sponsored by Slater & Gordon Lawyers, is urging the institutions that make up the justice system to adopt policies and practices that take bad driving seriously. The website also offers advice and has an online reporting tool.

CTC charts the risk of cycling

Apart from continually stressing that the health benefits of cycling far outweigh the disbenefits, CTC thinks that progress on cycling safety is best measured by how risky it is to cycle per trip or km, rather than simply by the number of casualties.

Using this measure, figures recently released by the DfT are a cause for concern. Although cycle use rose slightly in Great Britain in 2012, serious cycle injuries have gone up more steeply, meaning that the overall risk of cycling is higher.

Cycle fatalities rose from 107 in 2011 to 118, while serious injuries increased to 3,222 from 3,085. In total, road deaths have fallen to their lowest level ever at 1,754 – but it’s the occupants of motor vehicles who’ve largely benefited, not cyclists.

Reducing the risk of cycling is not an arcane science - putting money into cycling, improving infrastructure and tackling bad driving (not least by increasing rather than slashing the numbers of traffic police), are all part of the solution. 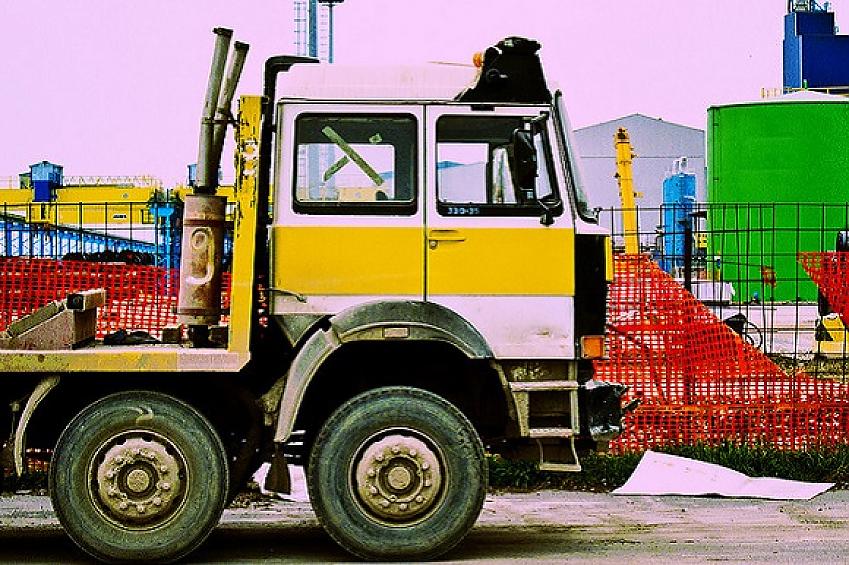 CTC and other cycling organisations are not as happy as they might be about possible amendments to a European directive that covers the weights and dimensions of lorries, even though it's been claimed that it could mean cycle-friendlier lorries.

The proposals, which would give manufacturers more freedom over aerodynamic, more 'cycle-friendly' designs, are also closely tied to moves to allow longer lorries on Europe’s roads, which would put cyclists and pedestrians at greater risk.

While making cabs more aerodynamic might help drivers see cyclists at the front, it’s the visibility of cyclists to the side that needs particular attention because it is this ‘blind spot’ that leads to all too many collisions.

This, and other issues relating to lorries, are discussed in CTC’s campaigns briefing on goods vehicles.

Action on lorries is urgently needed: tragically, yet another cyclist died in London on 15 July as a result of a collision with a tipper truck, while a 20-year-old French student cycling in London, two cyclists on a charity ride in Cornwall and a pensioner in Scotland also died in incidents involving lorries, all in just the first half of July. 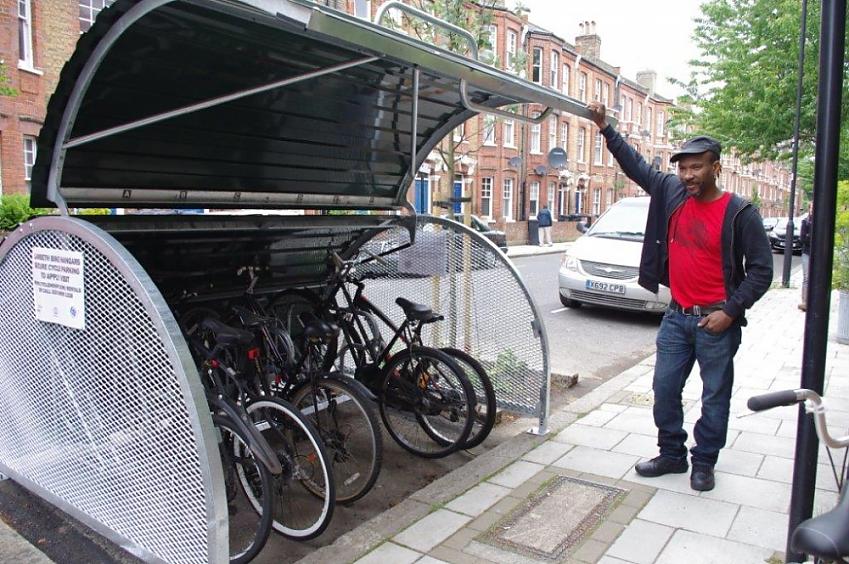 Twenty seven ‘Bike Hangars,’ each holding six bikes, are now available to rent in the London Borough of Lambeth for less than a pound a week.

Not being able to store a bike securely at home, inside or outside, is sometimes an insurmountable problem for would-be cyclists, but the new, on-street hangars are a very neat solution.

Residential Cycle Parking Manager Eric Duval says: “This is a really momentous project and an exciting time for cycling in London. The whole programme concentrates not only on existing cyclists but on supporting people to make the choice to cycle every step of the journey if they so wish.”

Lambeth Council also installs cycle parking on estates by converting redundant space such as old boiler rooms or pram sheds. They are also looking at adapting the Lambeth Hangar to accommodate a tricycle and cargo bike.

Bike security - advice from the force

Over 300 pedal cycles were stolen last year in the City of London, and the police there are determined to reduce the chances of yet more going the same way. They’ve uploaded a range of advice on YouTube, which includes a talk on cycle security by PCSO Scott Green. 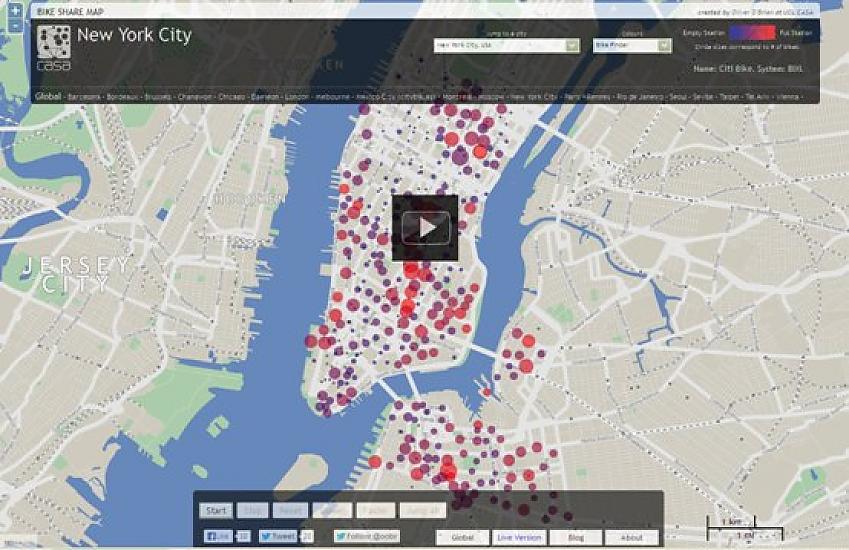 It’s so far, so good for New York’s Citi Bike cycle hire scheme, launched at the end of May. This ‘bike share map', which never fails to entertain the CycleDigest editor, shows a constant stream of activity and also allows you to check up live on schemes elsewhere in the world, from London to Moscow.

Thinking of setting up a cycle maintenance workshop as a community project?

For anyone after the voice of experience, a case study from Angus Dawson at Headset in Dorset is well worth a read.

Sign CTC’s Road Justice petition calling on police forces across England and Wales to pledge to implement the recommendations of the campaign’s report on how the police need to improve to keep cyclists safe and ensure that irresponsible drivers are brought to justice. 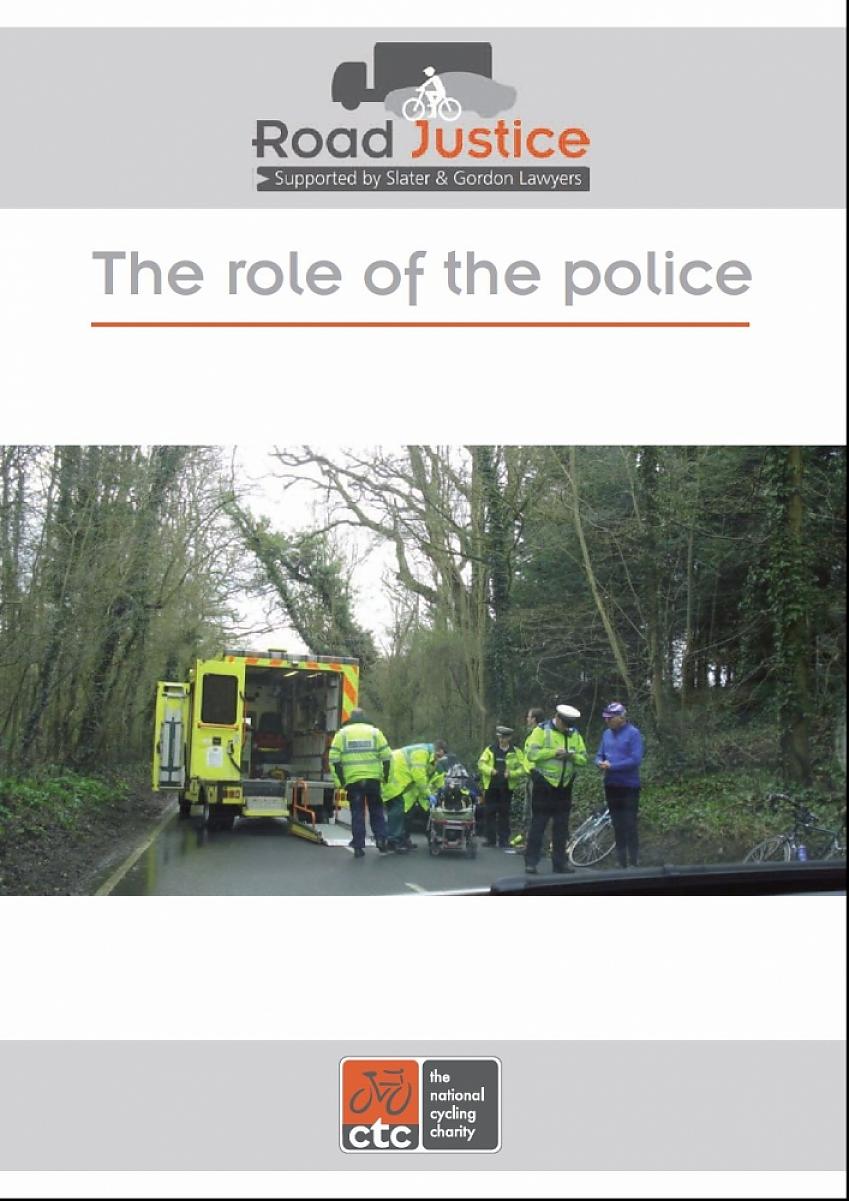 Road Justice: The Role of the Police

Published as part of CTC’s Road Justice campaign, this report explains how important it is for the police to investigate collisions thoroughly to make sure that victims are fairly treated by all sections of the justice system.

Includes eight case studies of cyclists who suffered serious injuries, illustrating some of the all-too-common failings of roads policing in the aftermath of road crashes.

This is the first in a series of reports on the justice system. The next two will focus on: charging and prosecution; and courts and sentencing. A report covering Scotland will also follow. 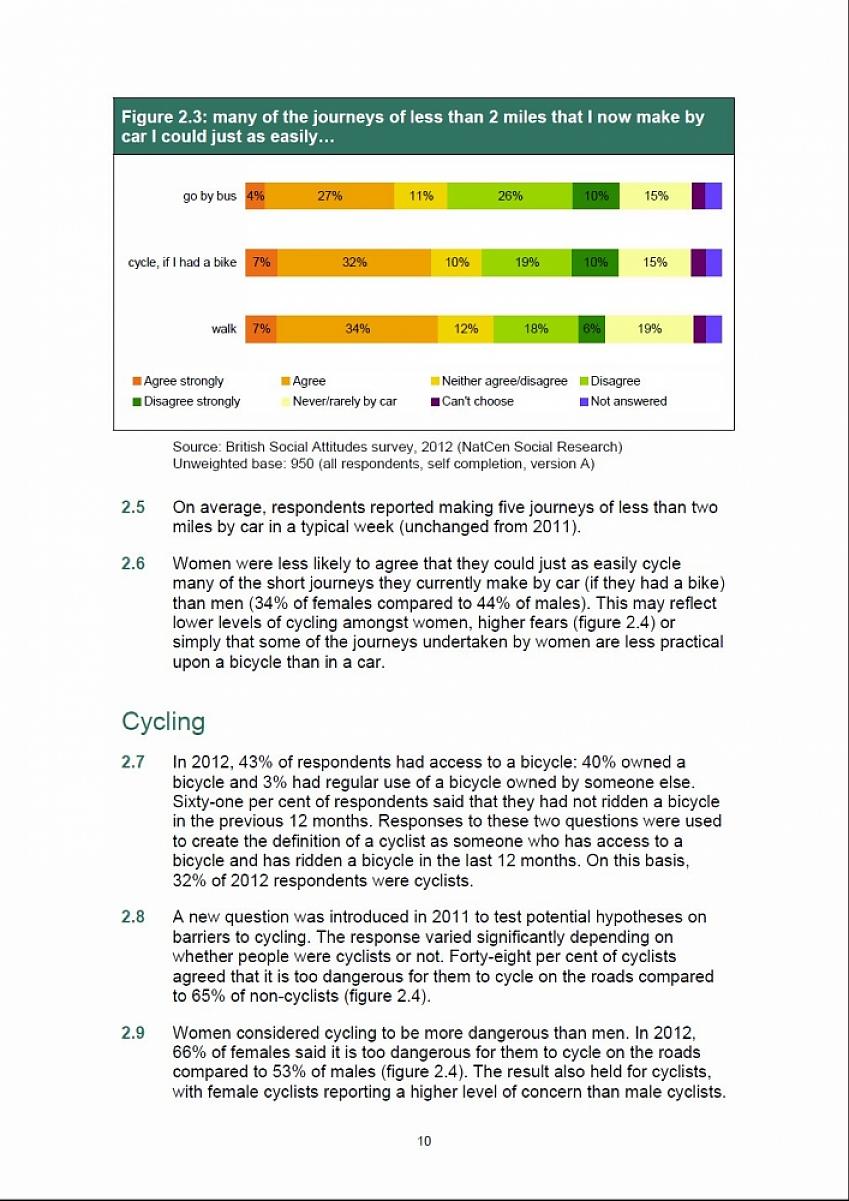 A useful barometer of attitudes, showing that the public is still very concerned about cycle safety, and only a third ever ride a bike.

59% of people agree or strongly agree that "it is too dangerous for me to cycle on the roads", but 39% say they could just as easily cycle many of the journeys under two miles they now make by car, if they had a bike. 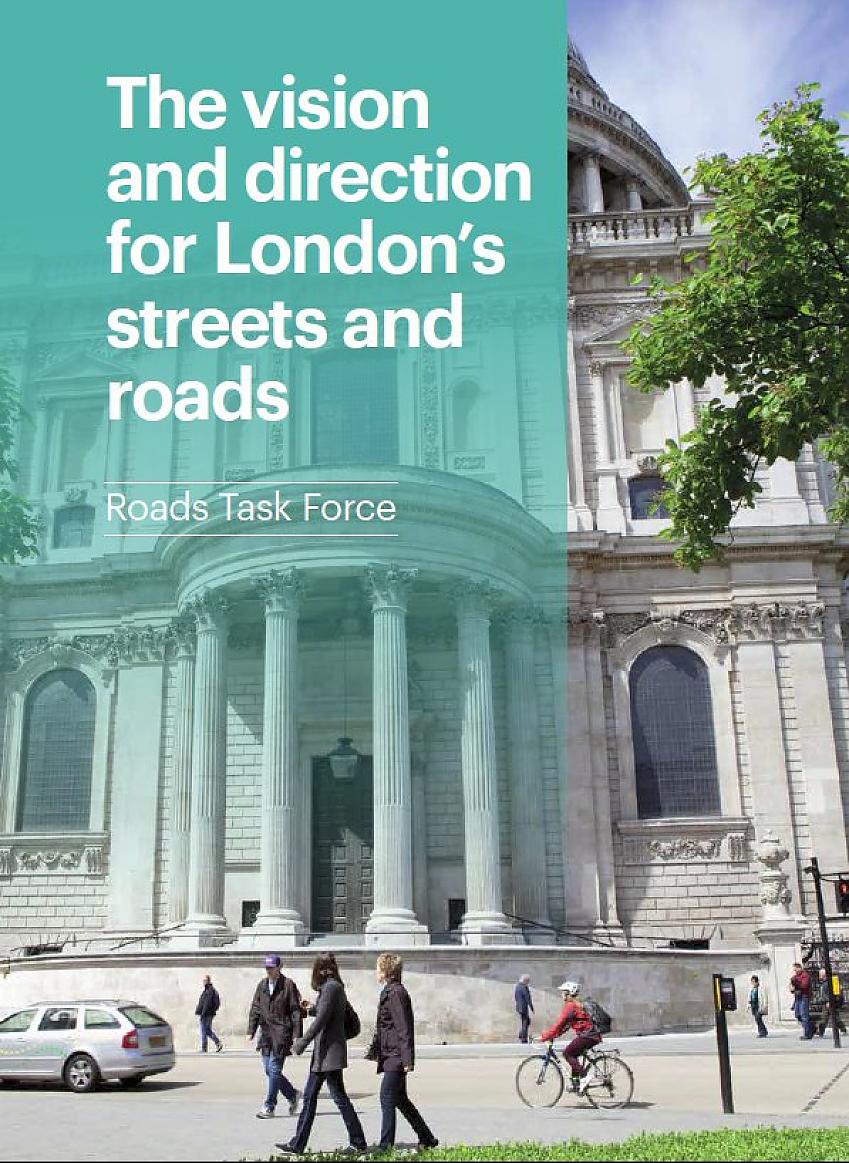 The Vision and Direction for London’s Streets and Roads

With the prospect of a huge growth in the population of London, this report makes recommendations on how the roads and streets could meet the challenge.

It comes out in strong support of 20 mph speed limits, re-timing deliveries outside peak hours and shifting HGV freight to vans, bikes or motorbikes. This is welcome news to those who want action on the risk that lorries pose to cyclists.

However, the report also suggests building tunnels for arterial roads, including the North and South Circulars, to clear space for cyclists and pedestrians on the surface. The RTF claims that this will keep traffic moving while improving the environmental quality of London's public realm, but tunnelled roads still have to have large space-consuming junctions - did the Task Force think about this?

TfL welcomed the report in a press release on the same day that it was published. It follows the publication of London's Road Safety Action Plan last month - the specific targets this set to increase cycling and reduce casualties struck CTC as internally inconsistent.

Transport and accessibility to public services

Report on the Committee’s Inquiry into transport and accessibility to public services.

Says that: “Existing transport funding could be better coordinated and directed to 'accessibility'-focused initiatives, which will have a swifter impact on people's well-being than large infrastructure projects. The social value of transport and accessibility needs to be explicitly considered in policy-making and in the planning system and should no longer be seen as a second-order criterion." 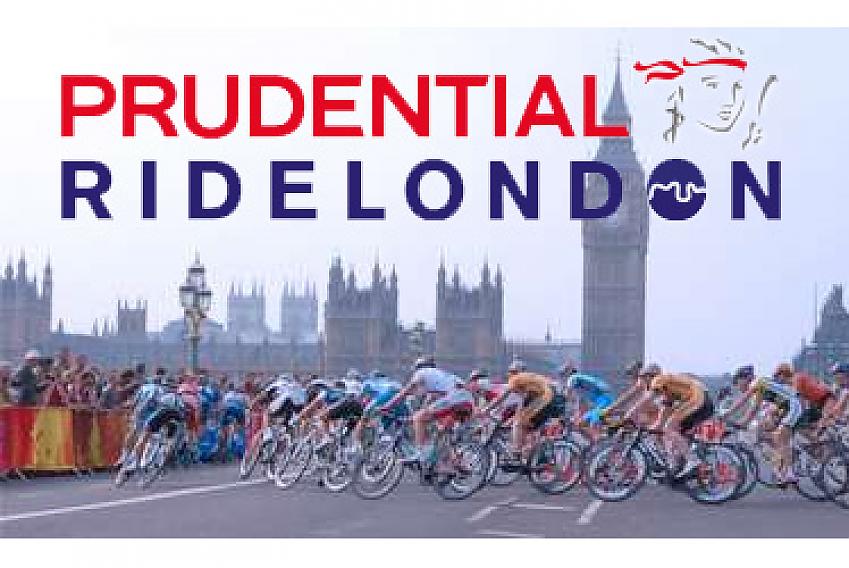 If you’d like to be part of cycling history, volunteer to become a marshal on the London-Surrey 100 & Classic on 4 August.

Conference for cycle activists and anyone with an interest in providing for or promoting cycling. More details nearer the time. Hosted in Leeds by the city's campaign group.