Cycling UK continues to support the UK to cycle
This remains true during this difficult period with the ongoing threat of coronavirus Covid-19
Read our latest advice on cycling
The Big Bike Revival got youngsters cycling during a Community Day in Bromford, Birmingham
By Tony Upfold
Tuesday, 30 August 2016

Bromford residents young and old are fully geared up for cycling this summer – thanks to the Big Bike Revival and the Gear Up cycle repair shop.

The Big Bike Revival is an award-winning programme developed by Cycling UK, formerly CTC the national cycling charity, which helps people to bring their bikes back into use by providing bike health checks, sharing maintenance knowhow and giving people more confidence in the saddle.

And the team at Gear Up, based in Hodge Hill, Birmingham, have been playing a big part in the success of the nationwide scheme by holding several events during the summer, with more to come in September.

Gear Up’s ethos is about bringing people in the community together and this is exactly what they have done through their Big Bike Revival events – in particular the fun-packed Community Day they took part in earlier this month which attracted 400 local residents to Bromford Park.

They ran Dr Bike cycle maintenance activities, provided their ‘Pulp Friction’ fixed bike – which people pedal to make smoothies – and also had the ‘Unrideable Bike’ which turns right when you want it to turn left!

Dan Sandford-Smith, from Gear Up, said: “The day was all about bringing people of all ages and cultures together. One local resident said he hadn’t ridden a bike in about 40 years and said it made him feel 25 again!

“We are committed to making the east side of Birmingham a better place through cycling and social enterprise and the Community Day was a perfect example of what can be done to achieve that goal.”

Cycling UK’s Community Clubs Development Officer for Birmingham, Vanessa Morris, said: “Days like these make such a difference to people in the local community. Not only does it put a smile on people’s faces, but some will be inspired to learn something new and others will be encouraged to be part of a group they may not have thought about joining before.

“The activities offered by Gear Up are so worthwhile and it would be wonderful to support them in future activities of this kind.”

During the course of the Big Bike Revival Summer of Cycling, Gear Up have also taken part in Hodge Hill Carnival, Olympics-based activity days in their area, Kingfisher trail rides and the Sheldon Countryside Festival, which attracted about 8,000 people.

Gear Up are also running Dr Bike cycle maintenance and health/wellbeing sessions at PureGym, in Coleshill Road, on 7 September, a Dr Bike day at Fort Shopping Park on 10 September, and will be involved in Birmingham Bikefest 2016 in Victoria Square on Sunday 18 September.

Gear Up support NEET young people (Not in Education, Employment or Training) through a personal development training programme. They also run an After School Club and drop-ins/youth clubs for children and young people who live in the Bromford area. 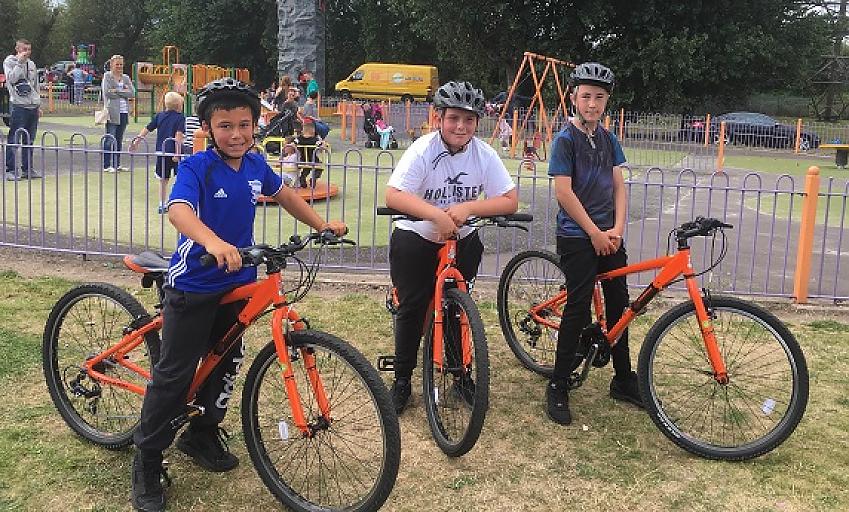