It’s a theme that underlies many of the stories below. Some councils and governments are providing examples of good leadership, others are downright mediocre. Local groups in Cambridge and Kensington are great examples of grassroots initiatives - showing the people ‘in charge’ how things should be done.

As cycling campaigners we can further develop our ‘soft’ leadership skills – influencing, persuading, motivating and collaborating for the collective good of our communities. Speaking together, we can set the tone of the conversation.

A default speed limit of 20mph is to be introduced across Wales after the Senedd approved new legislation on 12 July. This will make Wales the first UK nation to lower the default national speed limit from 30mph to 20mph. The nationwide limit, to be introduced in September 2023, will apply to restricted roads, typically residential and built-up areas with high pedestrian activity.

This case matters for people in Kensington and West London, but it also matters beyond London, because it sends a message that enabling active travel, re-allocating road space and making our roads and streets safer for all are not pick-and-mix options that can be ignored whenever it’s difficult or there are any local objections. 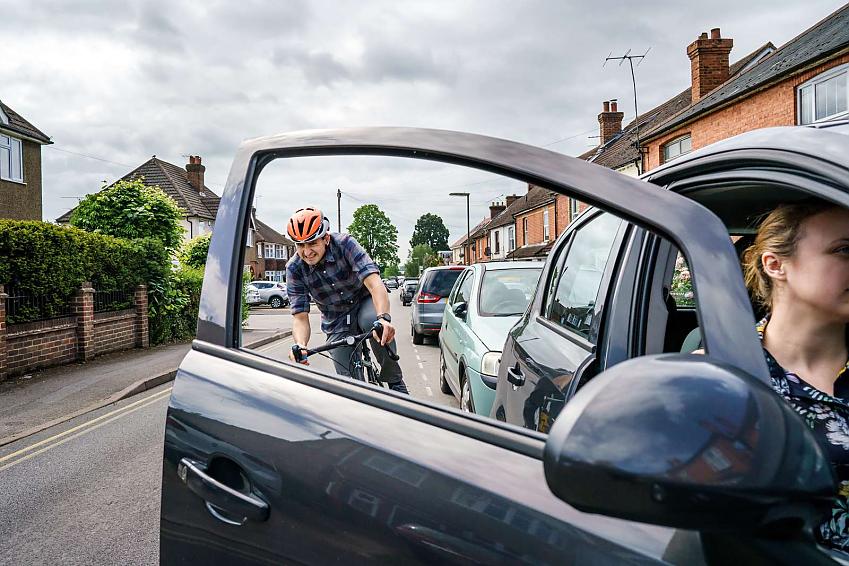 Government THINK! campaign launched to improve road safety for those most at risk

The government has finally launched its latest THINK! road safety campaign titled 'Travel Like You Know Them' to promote changes to the Highway Code aimed at protecting vulnerable road users.

January's Highway Code changes, amongst other things, introduced a hierarchy of road users, placing those most at risk in the event of a collision at the top of the hierarchy. However, the roll-out of the changes saw the government criticised for failing to inform the public.

This new campaign aims to shift the focus to people making journeys, rather than the vehicles they use, and promote the Highway Code changes. 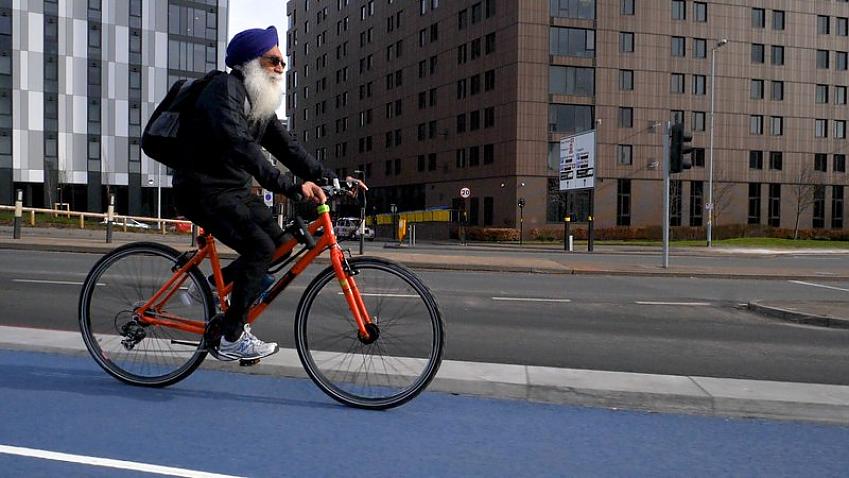 Whereas some cycling and active travel organisations politely welcomed the report, Cycling UK was more critical, saying that the funding available for the newly published strategy is still insufficient to meet its stated objectives. Cycling UK’s policy director Roger Geffen reflected that there is a “glaring mismatch between the increases in cycling and walking the Department for Transport (DfT) is aiming to achieve, and the funding available for doing so”. He ultimately concludes that new Investment Strategy lacks cash, but we must make the best of it.

Cyclists have complained that an East Belfast cycle lane is 'completely unusable' due to the number of parked cars in it.

The cycle lanes on both sides of the Newtownards Road have been in place for a number of years but are rarely used by cyclists due to cars parking in them.

Local businesses and residents have also complained about cyclists using the busy footpath as there is no cycle lane available for them to use.

Andrew McClean, Cycling UK’s engagement officer in Northern Ireland said, “Yet again the lacklustre attitude towards cycling has increased the danger for those of us who choose to do it, discouraging current cyclists and giving no incentive for new people to start.  Painted lines on a road offer little to no protection as it is, but are made even more dangerous when drivers expect cyclists to stay in that space only for them to have to pull out into moving traffic when they come across a parked car.

“The responsibility for the lack of legislation to protect these lanes lies solely with the Department for Infrastructure.  They either need to change the rules, or preferably, build physically segregated lanes over the painted lines.  The department is failing to meet it’s own targets for cycling, and, considering safety is the primary reason why people choose not to cycle, you would hope curbing dangerous parking would be high on their agenda.” 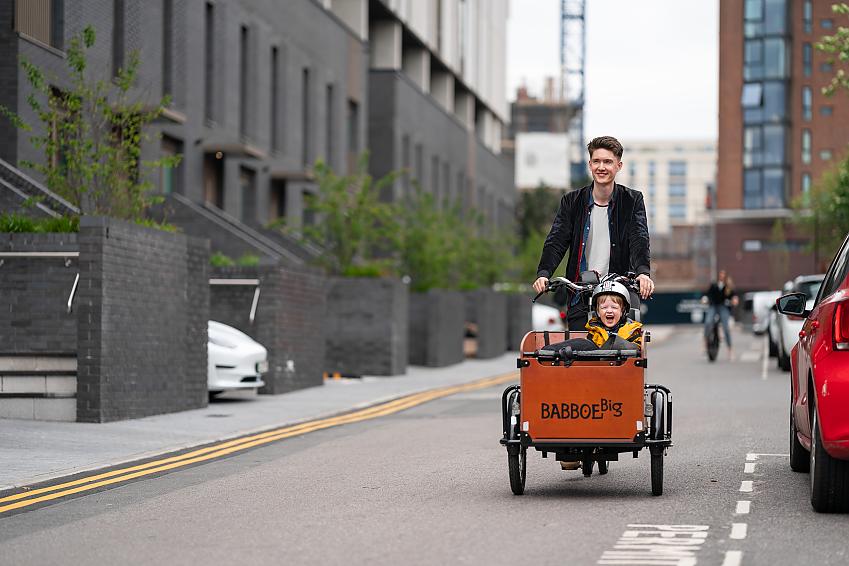 The Bicycle Association are reporting that year-on-year sales of cargo bikes have nearly doubled in the five months to the end of May, reports the Guardian . It comes after more than 40% growth last year and despite a general downturn in overall bike sales, which have slipped after the boom enjoyed during the pandemic lockdowns.

Third of Scottish households have no safe place to store their bikes: new report

More than a third of people living in Scotland don’t have a safe and secure place to store their bike at home.

Of the 2.6 million residential properties in Scotland, just over 37 per cent are flats in tenements, high-rises and apartment blocks that have no private outdoor space for sheds or garages where people can safely store their bikes.

This is the main finding of an independent report commissioned by the nation’s cycling organisation, Cycling Scotland , to understand the barriers to residential cycle storage in Scotland and look at solutions.

However, high-rise residents on Glasgow’s southside are being helped to get on their bikes thanks to a set of new ground floor cycle stores, in an example of how the storage question can be answered. The initiative is part of a scheme backed by Glasgow City Council and Cycling Scotland that supports social housing providers to improve cycling facilities for their tenants. It sits alongside the council’s heavily subscribed cycle shelter scheme delivered in conjunction with operator, Cyclehoop, which is due to expand significantly over the next three years. 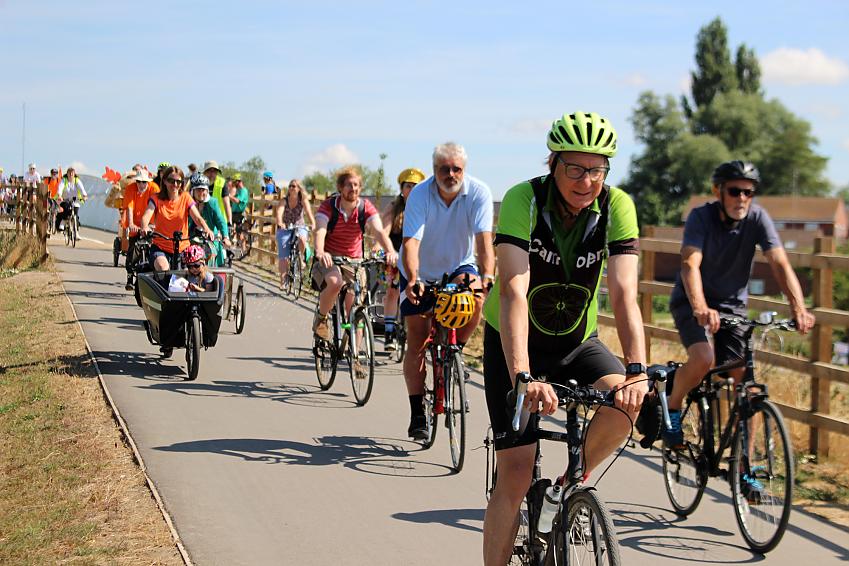 Over a hundred people attended an event to celebrate the completion and first six months' popularity of phase one of the Chisholm Trail on Saturday 16 July. The event was hosted by Camcycle with the support of the Greater Cambridge Partnership and Cambridge United Community Trust.

Jim Chisholm, who first conceived the route in 1998 was presented with a ‘Lifetime Achievement Award’ from Camcycle and a print of the Abbey-Chesterton bridge by local artist Sarah Vigliotti.

He said, “It has been great to see how many people are benefiting from Phase One of the Trail which so effectively joins Chesterton and Abbey and their people. Roll on Phase Two for the people of Romsey and Petersfield! It has been amazing to see the quality of provision that has been achieved thanks to the city and county councils and the Greater Cambridge Partnership and all those who have supported the cause. As Cambridge expands, I hope this Trail will continue to prosper, connecting more people to green space, commuters to their work and students to schools and colleges.”

Read (and be inspired by) Jill's story and then work out how you can use her proposal to the National Education Union as a starting point in your own union or professional body.

There are thousands of historical rights of way were recorded incorrectly when councils were compiling their official maps in the 1950s. However, the public’s right to ride on them still exists. It hasn’t just disappeared because they’ve been marked incorrectly on a map. Discover and recover lost rights of way near you.
Further information

These are opportunities for you to have a one-to-one consultation online with Cycling UK campaigns team staff. If you have a specific question you’d like to discuss, or a more general area you’d like guidance on how to proceed with then these could be for you.