A new virtual reality film from Cycling UK shows how scary it is to be overtaken too closely
Thursday, 27 September 2018

Common sense is doing particularly well this month, and we have no less than four campaign wins for you.

Cyclists aren't going to be banned from a stretch of the A63, or included in plans to raise the small claims limit; the Rhubarb Bridge, a key cycling link in Peterborough, is saved; and things are looking good for off-road cycling in the Agricultural Bill.

And, if people don't know what it's like for cyclists to be overtaken too closely for comfort or how to pass them safely, we've got the very thing. Experience our new virtual reality headset for yourself if you're visiting the Cycle Show 28 - 30 September in Birmingham (stand L61). We're looking to send one to every police force in the UK to help them educate drivers on the ground, so we've also launched a crowdfunding campaign.

I am personally very pleased about all these high notes. I've been editing Cycle Campaign News (and its earlier manifestations as Cycle Digest in print and online) since 2001 and the proportion of good news to not such good news hasn't always been quite so generous.

But now I'm handing over to my colleagues in our Campaigns Department, and looking forward to reading our round-ups from the outside (virtually, that is).

The next issue - No. 140, by sheer coincidence Cycling UK's age in years - will be out as usual in October, and I'll still be here, reporting and blogging on newsworthy campaigning matters.

For now, though, my thanks to all our readers and, in advance, all future editors.

And, to everyone - whether you see yourself as a campaigner or not - who wants to see cycling boom as much as we do and given me so much material to digest and round-up for seventeen years, my very great respect.

Too Close for Comfort gets virtually real 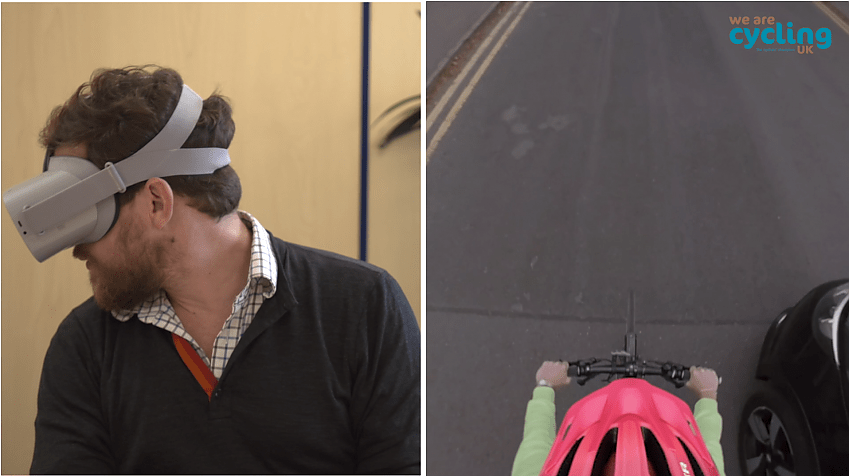 What you see and how you see it

Cycling UK wants to equip all police forces across the UK with headsets so that they can show drivers a virtual reality film we've made of what it's like to be passed too closely by a motor vehicle.

The film is being premiered at the Cycle Show in Birmingham this week (September 28 – 30) and an appeal launched to the raise the money we need to distribute it.

West Midlands Police, who’ve been pioneering action with their educational ‘close pass’ mats since autumn 2016, have endorsed it.

Following calls from Cycling UK and almost 10,000 letters of protest from our supporters, Highways England (HE) has dropped plans to ban cyclists from a 15-mile stretch of the A63 near Hull.

Along with Humberside Police, HE was concerned about cyclists’ safety, but now says it’s working to improve conditions along the stretch of road in question.

This is exactly what we were urging them to do.

I’m delighted that common sense has prevailed and pleased that Highways England listened to our arguments.

Thanks if you were one of our 10,000 letter-writing activists.

It’s taken us 18 months of campaigning, but at last the Government has decided not to include cyclists, horse riders, pedestrians and motorcyclists in proposals to increase the small claims limit.

Given that legal costs aren’t recoverable in the small claims court, raising the limit would have seriously disadvantaged the most vulnerable road users, whose personal injury claims typically exceed the existing £1k limit.

Funding their own case, representing themselves, or not pursuing a claim for compensation they deserve, would have been about the only options left.

Welcoming the news, Cycling UK’s Head of Campaign Duncan Dollimore said: “The balance and victims’ rights have been restored.”

Originally, the Government wanted the limit to go up to £5k, but they’re now thinking of settling on £2k, which is still above the £1.5k recommended by the Justice Select Committee.

As we reported last month, we’re calling on our supporters to urge the Government to carry out the comprehensive review of road traffic laws it promised in 2014.

In particular, we want:

The Department for Transport’s (DfT) current focus, though, is on new cycling offences alone. We think this is nothing short of tinkering around the edges of road safety, and are pressing for a wider review.

We’ve launched our campaign calling for a wider review of traffic offences for the sake of all road users - cyclists, pedestrians and drivers alike (see above).

But we’re often dismayed by the woeful lack of balance some media outlets exhibit when reporting on road crashes.

To illustrate the point, Cycling UK’s Keir Gallagher has been analysing coverage of two collisions that happened on the same day and bore much similarity, except that one involved a driver and a cyclist, and the other a cyclist and pedestrian.

Save our Crossing protest, A27 (July 2018), photo - Becky Reynolds, Bricycles

There's still just about time to speak up for the 'Sussex Pad', an essential crossing of the A27 at Shoreham.

It's the best safe way over the road for miles around, and used by thousands of horse riders, cyclists and pedestrians every week.

But it’s under threat and the petition to save it must be delivered to the council’s planning meeting on 3 October.

One other urgent request while we're covering urgent requests: Great Western Railway (GWR) and Network Rail is asking for suggestions on stations to nominate for DfT 'Access for All' funding.

The prize is an accessible route into the station and to and between each platform.

If you have a likely station in mind, whisk yourself off now to GWR’s survey – you’ll need do this by Monday 1 October! (But remember to come back to read the rest of Campaign News).

The Bill, which covers the arrangements for agricultural payments and subsidies post-Brexit for farmers and landowners, places financial support for improved countryside access up front in Part 1, paragraph 1, section 1b.

This is exactly what Cycling UK’s Get on my Land campaign was calling for.

Local groups in Peterborough, backed by Cycling UK, have saved a key walking and cycling link over the A47/A15 junction from demolition.

Without concerted effort - including filming driver behaviour round the junction, a social media push and petition - The Rhubarb Bridge would soon be no more, and the 2,000 people who cycle or walk over it each day facing ground level crossings instead.

There's still a marked lack of progress on serious injuries, however, with a 19% rise over the 2010-2014 average, and 9% increase on 2016. While some of this could be due to a new system that helps the police classify injuries more accurately, the news is nevertheless alarming.

Also, while the risk of being killed or seriously injured (KSI) per billion vehicle miles for car drivers has dropped since 2007 (from 34 to 25 KSI per billion miles), it's risen from 999 to 1,160 over the same period for cyclists. We'll be looking at the statistics in more depths, and report back in due course.

David Davies, Executive Director of PACTS (The Parliamentary Advisory Council for Transport Safety) has written to roads minister Jesse Norman MP setting out what the Government’s priorities should be when they refresh the 2015 British Road Safety Statement.

Marking the 10th anniversary of the charge of ‘Causing death by careless driving’ (CDCD) the road crash victims’ charity RoadPeace has been looking at its repercussions.

Prior to August 2008, the charges available to prosecutors in fatal cases were either ‘Causing death by dangerous driving’ (CDDD) or merely ‘Careless driving’ (i.e. the same charge that could be brought for a minor traffic offence).

RoadPeace says that, by 2017, CDCD had been used 2,072 times, making it the most common causing death by driving offence.

Discussing reservations held by campaigners (including Cycling UK), that the new charge would lead to more drivers escaping prosecution for CDDD, RoadPeace notes some evidence to suggest that, in England and Wales, drivers originally charged with this offence “… saw their charges downgraded as their cases moved through the court system, particularly during 2011-2016. Even so, a fatal collision in 2017 was more likely to result in a conviction for Causing Death by Dangerous Driving than it was in 2007.”

The charity also says, however, that drivers in Scotland appear to be escaping CDDD “at an earlier stage (at initial charging) and on a greater scale.”

mySociety (the charity behind sites like FixMyStreet and TheyWorkForYou) has been working with Merseyside Road Safety Partnership to improve Collideoscope, its cycle incident reporting website.

The aim is to help build an evidence base to inform road safety improvements, with reports sent to the relevant local council, as well as being made available online for campaigners and policy makers to browse and download for further analysis.

Survey says there's not much change in levels of cycle use

The results of England’s National Travel Survey (NTS) came in earlier this summer, but they’ve now been fleshed out by the Active Lives Survey (ALS), which drills down to the habits of the adult population at local level.

In the year ending mid-November 2017, the ALS suggests that among English local authorities:

Tiny rises and falls in such miniscule percentages don’t tell us much, except that we’re still waiting for the revolution.

The DfT has published a series of documents looking at the impact of the Local Sustainable Transport Fund (LSTF), a £560+ million grant programme that supported almost a hundred match-funded local projects in England between 2011 and 2015.

The analysis finds that:

The DfT has also published initial findings from the eight cities/groups of cities that benefited from Cycle Ambition funding in 2013 (and again in 2015), i.e. Birmingham; Cambridge; Greater Manchester; Newcastle; Norwich; Oxford; West of England; and West Yorkshire.

Roads could be much, much busier than this by 2050

According to the DfT, Great Britain's traffic could increase by anything from 17% to 51% by 2050, depending on various scenarios and assumptions. The rise could be between:

Cycling UK believes that predicting motor traffic growth shouldn’t trigger yet more road building. Instead, we’d like to see the modelling process account for the potential impact of robust, long-term pro-cycling and walking policies and investment.

This is why we agree with the Commission on Travel Demand who recommend that the DfT’s prophesying tools should be open source, giving others the chance to take an alternative and more sustainable look into the future.

Given the huge predicted rise in LGVs (see above), it’s just as well that the Government’s investing £2 million in the uptake of e-cargo bikes.

The idea is to “pave the way for the nimble electric delivery vehicles to replace older, polluting vans - helping to improve the environment and reduce congestion.”

Government-funded UK trials for e-cargo bikes in 2017 exceeded expectations, proving their commercial viability and efficiency: 96.7% of orders, the pilot found, could be fulfilled in a single e-cargo bike drop.

Commuting on an e-bike

A YouGov survey, commissioned by the independent energy supplier OVO, suggests that a fifth of all British workers would be more likely to commute by e-bike if the Government raised the £1,000 cap to its Cycle to Work ‘salary sacrifice’ scheme.

Women's views don't get a look in

According to a new academic paper, women's viewpoints aren't reflected nearly enough in the Cycling Level of Service tools (CloS) used by planners and engineers to assess existing routes and ensure they’re safe, direct and continuous.

The authors say that their data suggest that the tool’s safety component “… can only be considered objective from a male point of view and inadequately considers the perspectives and needs of women.”

A safety scheme that bars Bank junction to all vehicles except buses and cycles from Monday to Friday, 7am – 7pm is now permanent thanks to a recent vote by the City of London Corporation. Cycling isn’t the only benefactor - walking around there is a lot more enjoyable too.

DfT all for bikes on trains

In answer to a recent parliamentary question, rail minister Jo Johnson MP said that “The Department recognises the value in the integrated use of cycles and trains”, and that it expected franchises to “ensure that their trains meet the needs of their passengers - including the storage of cycles and luggage”.