It’s a packed edition of Campaign News after a busy month in all four nations.

Road safety has been a big focus, with the Scottish Government consulting on a new Road Safety Framework and new reports and discussions for Road Safety Week.

Meanwhile the Welsh Government has unveiled an exciting vision to push cycling and walking to the top of the transport hierarchy, and we’re making the case for an Active Travel Act in Northern Ireland.

In England, more funding for active travel measures inevitably brings with it more criticism – so we’ve gone in search of experts and evidence to prove the public support for cycling and walking.

New cycle infrastructure is often focused on urban areas, but rural residents need safe cycle routes too. That’s why we’ve launched a new campaign to highlight the potential of existing off-road routes – and we need your help to point out the missing links in the network.

There are just a few days left to respond to the consultation on the Road Safety Framework – the Scottish Government’s vision to achieve the best road safety record in the world by 2030. The consultation closes on 1 December.

MSPs are already calling for a “radical rethink” of transport policies as a result of coronavirus, and the more voices we have pushing for change, the better chance we stand of making our roads safer.

Jim Densham, Cycling UK’s campaigns and policy manager for Scotland, has analysed the framework and produced a summary guide to help you respond.

Councils in England have been allocated a further £175m from the Active Travel Fund announced in May, to create more safe space for cycling and walking. Cue more vociferous cries that new cycle lanes and low traffic neighbourhoods will cause gridlock and bankrupt local businesses.

But the evidence shows that beneath the noisy outrage, there is a quiet majority in favour of the measures.

The move will leave councils struggling to invest in planned cycling and walking networks, and raises serious questions as to how the Government will meet it’s £2bn spending commitment by 2025 without significantly ramping up spending in 2022/3.

Responding to the announcement, Duncan Dollimore, Cycling UK’s head of advocacy and campaigns, said: "The Government’s vision and stated ambition for active travel are impressive, but this spending review takes us backwards when it comes to delivery.”

Cycling UK welcomes the Welsh Government’s draft transport strategy document ‘Llwybr Newydd: A New Wales Transport Strategy’, which sets out a range of policies to create an ‘accessible, sustainable transport system’ over the next 20 years.

Gwenda Owen, Cycling UK’s engagement officer for Wales said: “It is great to see that active travel is prioritised in this report… [now] we need to see that translated into action on the ground which will make it possible to achieve that modal shift for short journeys.”

Cycling UK will be consulting with members in the next few weeks in order to make further representations on the plan, which is open for consultation until 25 January 2021.

Where are the missing links in your off-road routes?

We’ve all experienced that frustrating moment: you want to go from here to there, but in between there’s a section you’re not able to ride on. Perhaps it’s a track that’s classed as a footpath, a disused railway line, or a trail that would cut out a section of busy road.

With our new mapping tool, you can identify your missing link routes and ask your council to make plans to connect them.

The latest Government figures show that motor traffic on Britain’s roads is back up to 100% of normal levels, despite 28% of employees continuing to work remotely.

With over half of drivers saying having access to a car is more important now than before the pandemic, the research from the University of Westminster predicted that up to 2.7 million more people who had previously commuted by public transport could switch to travelling by car, causing gridlock in many UK cities.

Diversity in cycling: are we doing enough? 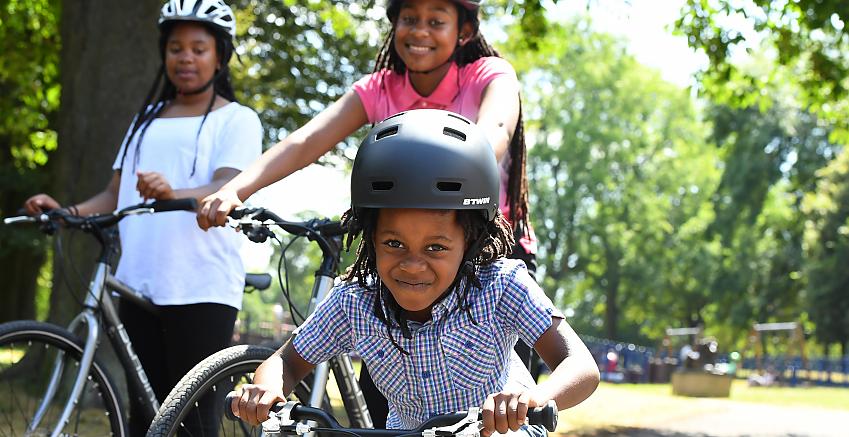 The past few months have turned the spotlight on the racial inequalities present in all facets of society, and cycling is no exception. This excellent article delves into the data on diversity in cycling (or the lack thereof), and some work-in-progress positive actions.

Reflecting on Black History Month and the Black Lives Matter movement, adventure cyclist and diversity and inclusion professional Aneela McKenna gives her views on how cycling can and should increase participation for people of colour.

And as part of Cycling UK’s Volunteer Celebration, we had a lively panel discussion about the need for inclusive cycling groups and why some people feel more comfortable in a group which specifically caters for them.

Making the case for an Active Travel Act in Northern Ireland

MLAs have been questioning the Department for Infrastructure about why active travel spending in Northern Ireland is so far below the rest of the UK, at just £2 per person.

Josh Murray, Cycling UK’s engagement officer for Northern Ireland, explains why he thinks that now is the time to follow Wales’ lead by creating an Active Travel Act. With your support, we can make it happen.

Potential for e-bike subsidies to encourage more people to cycle

The UK Government is drafting plans to cut the cost of e-bikes by up to a third, similar to the current system which encourages people to buy electric cars. The full details are due to be published in the spring, following trials during the next few months.

Sarah Mitchell, Cycling UK chief executive, said: “E-bikes flatten hills, cancel headwinds, turn short sweaty routes into a carefree ride, and above all they are fun. Nearly 70 per cent of journeys under five miles are driven. With the right incentives and right infrastructure in place, a mass uptake in e-bikes could provide a real alternative to households that previously relied on two or more cars."

The first electric bike sharing scheme in Wales has also been launched in Penarth, following the success of the nextbike cycle hire scheme in Cardiff.

Last week was Road Safety Week, and we had some great discussions about supporting staff to cycle confidently, communicating changes to the Highway Code, and increasing women’s perceptions of cycle safety. They are all available to watch again if you missed them.

Duncan Dollimore, Cycling UK’s head of campaigns, also took part in an useful webinar by Bristol Cycling Campaign exploring how we can tackle dangerous driving, both locally and nationally.

As if we needed a reminder of why continuing to highlight road safety is important, a new PACTS report ‘What kills most on the roads?’ sets out in plain terms the danger posed by motor vehicles and the need to reduce traffic collisions.

Scotland's Active Travel Commissioner report sets out the next steps

Lee Craigie, active travel commissioner for Scotland, has published her report reflecting on her first eighteen months in the role and the changing context due to coronavirus, and set out her objectives moving forwards - including advocating for a strategic active travel network with the same legal importance as the trunk road network, more widely available cycle hire and loan schemes, more trials of cargo bike deliveries and better provision for carrying bikes on trains.

Local campaigner guide: How to petition your local council

Do you want to show your council how important an issue is to you and your local community? One way is through a local petition. Read our guide to find out how you can effectively petition your council to improve cycling.

This adds to our series of publicly-available resources to support local campaigners - find more on our Cycle Advocacy Network pages.

Consultation open until 1 December - have a look at our blog and summary guide to help you respond.

England: Speak up for a cycle powered recovery

Help combat the 'bikelash' by writing to your council to support more measures to enable walking and cycling.

Existing off-road paths and tracks have so much potential for traffic-free cycling - but we're not always able to cycle on them. Mark your missing link routes on our map and ask your council to increase access for cycling.