June is always a busy month in the world of cycling, with the energy from Bike Week at the start of the month powering us through. Of course, this June has been very different from usual, and that is in no small measure due to the tectonic shift in the bicycle campaigning landscape. We finish the month waiting to hear just how much money the Westminster government is allocating English councils for their Emergency Active Travel Plans. Final numbers have not been published as Campaign News goes to press, but we understand that local authorities with ambition are being allocated even more than they asked for, whereas those that proposed just a few dabs of white paint are receiving somewhat less.

Across our four nations, grants are being made from governments to councils – and none of us would have predicted this even three months ago. The focus for many of us in July will be about encouraging disappointed local authorities to raise their ambition so they can receive a better share of this coming autumn’s second allocation. Bike Week may be over... but perhaps Bike Year is only just getting under way. 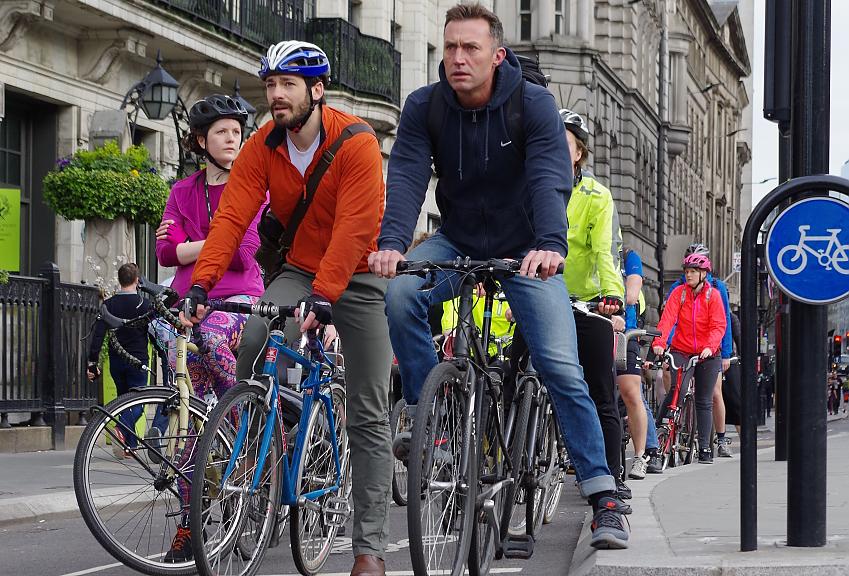 Poised and ready to go

With our national governments now allocating emergency money for temporary active transport measures to local authorities, many councils are asking their residents to highlight where pop-up active travel infrastructure is required. At Cycling UK we are recommending people use the WidenMyPath tool and then email their council. A number of councils have launched their own direct consultations.

The Scottish government has made £30m available to councils in order to widen pavements, install pop-up cycle lanes and take measures to create places for people.

In England it seems some councils haven’t fully grasped what kind of measures Westminster is asking them to spend money on, so at Cycling UK we have provided some helpful guidance.

Our campaign for space for social distancing will continue as lockdown eases – keep checking for updates.

More people than ever are riding bikes…

Figures compiled for Sport Wales suggest 67% of people in Wales have cycled for leisure more than usual under lockdown, while nearly 66% of adults believe it is more important than ever and 10% of the population overall have been out for a ride. The Department for Transport is publishing statistics on daily transport use by mode every Wednesday (for GB only, not Northern Ireland) based on objective measures such as cycle counters – which show a sustained and considerable increase in the number of bicycle journeys, not only at weekends but on weekdays too.

…and many more want to start

A recent survey by Cycling Scotland has shown that one in four Scots are more likely to cycle on dedicated cycle paths. Michael Matheson, Cabinet Secretary for Transport, Infrastructure and Connectivity, said: “I’m pleased that people across Scotland have been able to discover or reconnect with cycling during our period of lockdown. As we transition through and out of the Covid-19 crisis, we’re continuing to ask people to walk and cycle if they need to travel, in order to help manage demand on the transport network."

All the more reason to raise our voices and demand the Scottish government funds dedicated cycleways.

Setting off for the ride home

On June 15 the government published further guidance for the Towns Fund announced by Prime Minister Boris Johnson last year. The 100 selected places (all in England) have until 13 July to decide whether to develop a Town Investment Fund and bid for a share of £3.6bn. Towns can apply for up to £25m each (more in exceptional cases), and the government specifically says that supporting sustainable transport is one of the best uses for it.

There will be other calls on the money, of course, but the new Towns Fund can really help cycling as it helps local economies regenerate and thrive.

Do you live in one, or nearby? Find out my looking at the map, and then consider ideas for action in our guide.

The unlocking: a vision for sustainable transport in Wales

With all but one of the Welsh local authorities recently being awarded funding for temporary infrastructure, Transform Cymru has launched a new vision for sustainable transport. It is asking councils to commit to seven steps to make their vision a reality.

Cycling UK’s Northern Ireland engagement officer, Josh Murray, reports the successful overturn of a ban on cycling in Lisburn’s Wallace Park following pressure from local residents. The story was picked up by the road.cc website when Lisburn and Castlereagh City Council said some cyclists were "using Wallace Park as a racetrack". Josh dug deeper into the story, and discovered some BMX riders had set up a ramp in the park in order to get some jump practice in. The council viewed this as "racing" and overreacted with a blanket ban of all bicycle users (except small children). Following some forthright engagement on social media and a conversation with an MLA, the ban has now been lifted. It’s great to see how people uniting on a local issue can swiftly make a change.

Planning the most efficient cycleways

Dr Robin Lovelace and Dr Joey Talbot at the University of Leeds Institute for Transport Studies have just launched a new Rapid Cycleway Prioritisation tool to help councils and campaigners identify promising locations for new cycleways in England. According to the introduction, "the tool identifies existing cycleways, promising locations for new cycleways on roads with spare space […] and what a cohesive cycling network might look like in the longer term." The team have worked with Martin Lucas-Smith at CycleStreets to overlay their data over a fully interactive map, so anybody in England can see possibilities in their local town.

Cycling UK has joined nine other organisations, including Living Streets and Mums for Lungs, in calling for the urgent implementation of “School Streets” in light of schools reopening, following a new survey which has found six out of 10 parents are worried about increased levels of traffic when lockdown is lifted.

Global Action Plan, which commissioned the survey, is asking people to write to the headteacher of their local school, as well as local councillors, to urge them to implement School Streets in time for schools returning after the summer break.

Two thirds of police forces detected motorists exceeding 100mph, with the highest speed of 151mph clocked on the M62 in Yorkshire, according to a freedom of information request from the RAC

With road safety issues often in the news during lockdown, there is a timely new report from the Parliamentary Advisory Council for Transport Safety (PACTS); Roads policing and its contribution to road safety.

According to the report, the long-term decline in the number of road deaths and serious injuries has stopped since 2010. It is widely suggested that this is at least partly due to reductions in roads policing. The report includes a review of mre than 100 individual studies and asserts there is clear evidence that an increase in enforcement will lead to a reduction in both fatal and serious injury collisions.

Among the report’s recommendations are an increase in the overall number of roads police officers, and a prioritisation of road policing and road safety within Police and Crime Plans.

Research by Dr Rachel Aldred and the Active Travel Academy at the University of Westminster has revealed the risk of an additional 1m cars clogging the streets of England and Wales during rush-hour as lockdown eases. A new report examines various post-lockdown commuting scenarios, and suggests that if all previous public transport users switch to driving there will be 2.7m more people travelling to work by car – a 17% increase. However, half of public transport commutes are less than 10km, so a switch by these workers to active travel could lead to a significant reduction to the burden on our roads.

Decarbonising transport: the role of cycling

We understand that cycling is part of the solution to many societal and environmental challenges – including climate change – but we often don't necessarily appreciate either the scale of the potential benefits, or how to realise them.

This webinar will explore how cycling infrastructure, combined with measures to significantly reduce emissions, can provide an effective transport solution in our towns and cities. The panel discussion will feature expert guests from both the UK and the Netherlands, who will provide practical examples and actions to create a most sustainable future.

Our expert guests include:

Jillian Anable – Professor of Transport and Energy, University of Leeds

There will be an opportunity for Q&A with the panel, and questions can be submitted in advance.