Bikeability training will be available for every child in England - now all they need is safe places to cycle. Photo by Andy Catlin
Monday, 24 February 2020

Money, money, money… it’s that time of year again for trying to see if Governments will budge on their budgets for cycling and walking. Boris Johnson has promised billions for buses and bikes, but what does this really mean? And will the Scottish budget live up to its promises?

Proper funding for safe cycling and walking infrastructure is crucial to help solve many of the crises facing society. This is clear when we delve deeper into how cycling projects can help tackle health inequalities, and examine the lack of progress on road safety.

With all this stormy weather, road conditions have suffered in many places. Keep an eye out next month for Pothole Watch Week (see diary dates), when we raise awareness of the danger they pose to cyclists and encourage people to get involved and report them to be fixed. In the meantime, you can keep reporting road defects using the Fill That Hole app and website.

Boris’ billions for buses and bikes 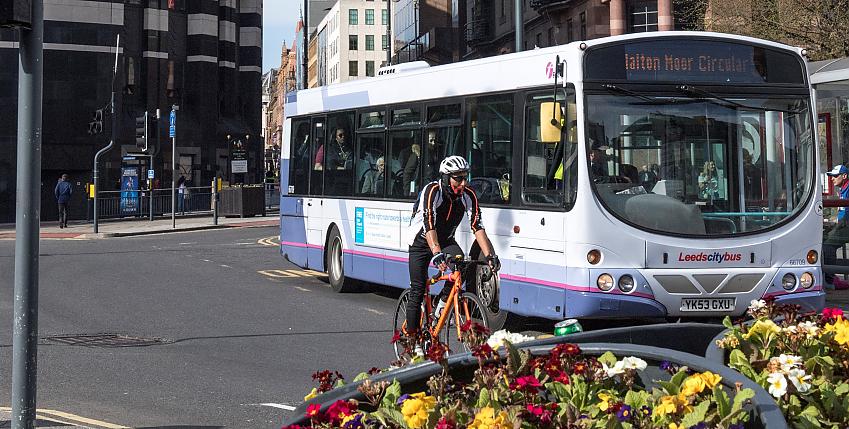 Money for buses or bikes? Photo by Joolze Dymond/Cycling UK

The headline: five billion pounds of new funding to overhaul bus and cycle links for every region in England outside London. What’s not to like? Cycling UK’s Head of campaigns Duncan Dollimore deconstructs the claims. See CEO Paul Tuohy’s reaction in this article.

There is welcome news that Bikeability cycle training will be available for every child in England, but the funding is still not enough to meet the Government’s own targets of doubling cycling journeys by 2025.

‘Budget to tackle the climate emergency’ says Scottish Government, but does it go far enough?

More ambition is needed from the Scottish budget. Photo by Andy Catlin

The Scottish Budget 2020/21 includes a modest increase in funding for cycling and walking. This is good to see, but Jim Densham, Cycling UK’s campaigns and policy manager for Scotland, asks whether it is sufficient for a budget that aims to tackle the climate emergency, and sets out what more needs to be done.

A new report shows that health inequality in Scotland is getting worse. Evidence from Cycling UK projects tells us that cycling can address many of the health issues that disproportionately impacts people in the most deprived areas, as Donna Nicholas, Cycling UK’s Research and Evaluation Manager for Scotland, explains.

Another recent report has found that across the UK, switching 1.7% of car journeys to walking and cycling would prevent annually an estimated 65,000 early deaths from air pollution, and deliver £2.5bn in health benefits.

Reduction in passenger road deaths 'not matched by cyclists and pedestrians'

Numbers of vehicle passengers killed in collisions have been steadily decreasing, but a new report reveals that this is not matched by a reduction in cyclist and pedestrian deaths. In fact, pedestrian fatalities have risen slightly in the UK, in contrast to most European countries.

Cycling UK's head of campaigns, Duncan Dollimore, told road.cc: “Cycling UK have repeatedly called for greater use of driving disqualifications, longer bans, and the closure of the ridiculous exceptional hardship loophole, which leaves over 10,000 people driving on our roads each year with more than 12 points on their licence. It’s a relief that the Judge acknowledged that the hardship was proportionate with the offending.” Read Duncan’s full response.

Living car-free can be easier than you think. Photo by Julie Skelton/Cycling UK

Coventry residents are being offered a new scheme to encourage them to ditch their cars in return for up to £3,000 worth of mobility credits to spend, using a smartphone app or Swift travel card, on public transport, taxis, bike share or a car club.

Will shared e-bikes become the norm in Northern Ireland? Photo by Marcus Ahmad

In Northern Ireland, e-bikes are classed as mopeds, so it’s illegal to ride them unless they are taxed, insured and registered. However, now the Assembly is back up and running, this looks set to change to help encourage more people to cycle – which is all the more necessary given the Assembly has now declared a climate emergency while the latest Travel Survey shows the number of people cycling has stagnated. To help get those wheels turning, Cycling UK is interviewing this week for our first engagement officer based in Northern Ireland.

Manchester planning UK's largest cycling and walking network - but will funding be available to deliver it?

Imagine this all across Manchester. Photo by Joolze Dymond/Cycling UK

Greater Manchester’s Mayor Andy Burnham and Cycling and Walking Commissioner Chris Boardman have urged central Government to support plans for a 1,800 mile network of protected space for cycling and walking.

Assemble is here to make your life easier. Photo by Joolze Dymond

Cycling UK has recently launched a new volunteering platform called Assemble, which will make it much easier for local campaigners to link up with other people in their area, share best practice and find information and resources. Many local campaigners formerly known as Right to Ride reps have started using the system and are finding it very helpful. If you are campaigning individually or as part of a group and would like to join the network, you can find out more here.

How do we manage the growth of urban traffic?

It's a tricky question. Watch expert presentations on the topic from the International Transport Forum conference – an invaluable resource for anyone trying to grapple with this pressing issue. While several cities are now planning to ban cars from driving through the centre, there is an interesting opinion piece here on how London banned cars - and grew more congested than ever.

Headlines: Boris’s billions for buses and bikes; ‘Budget to tackle the climate emergency’ says Scottish Government, but does it go far enough?

Other stories: How cycling can tackle health inequalities; Reduction in passenger road deaths 'not matched by cyclists and pedestrians'; Dangerous driver who killed cyclist fails to have 10-year driving ban overturned; Would you give up your car for £3,000 a year?; E-bikes could soon become legal in Northern Ireland; Manchester planning UK's largest cycling and walking network - but will funding be available to deliver it?; New online tool for local campaigners; How do we manage the growth of urban traffic?; Grants available for road safety projects

Take action: Save your trails before they are lost for good

Over 10,000 miles of paths across England and Wales are at risk of being lost forever, unless we make an effort to put them on the map. Find out how we can save them before they disappear.

Welsh Government is consulting on its Active Travel guidance for good planning and design. There are four public consultation events between 2-27 March. Find out more.

The week beginning 16 March, we encourage everyone to spot and report as many potholes as they can using our Fill That Hole tool.