Good news for Cycling UK's Big Bike Revival in this issue of Campaign News
Wednesday, 8 May 2019

Welcome to your second 'catch-up' edition of Campaign News, which will bring you up to date on all the important cycling related headlines until the end of March, before a final double bill will take you up to the end of May in a few weeks time.

This edition brings you good news in the form of a funding boost from the Department for Transport (although there's a lot more needed if the Government wants to hit its own cycling and walking targets), while two new publications from UNICEF UK and the European Environment Agency have highlighted once again the serious negative impacts poor air quality has on our children and those living in the poorest regions of the continent.

Distracted driving is on the rise, according to iAm Roadsmart, despite increased penalties for mobile phone use and, in Derby, local campaigners have found a novel way to draw attention to local authority plans to remove a bus and cycle lane.

Back in March, the Government announced a welcome £23 million boost for cycling and walking. The majority focussed on improving national cycle routes, but £1 million was also allocated to Cycling UK’s Big Bike Revival, helping us help people throughout the UK to get on their bikes and discover (or re-discover!) the joys of cycling. This double in investment from Government is testament to the amazing work of everyone involved in the project over the past few years. However, while this funding is undoubtedly welcome, it falls far short of the investment needed if the Government is to reach its current targets for cycling and walking, which is why we’re continuing to campaign for funding for cycling and walking, to enable local authorities to design and build the infrastructure needed to make cycling and walking safe and attractive at a local level.

iAM Roadsmart have released a ‘White Paper’ report “Driving While Distracted: Challenges and Solutions”, following on from their 2017 report “The Battle for Attention”. The report highlights an 11% increase in distracted driving leading to fatalities over the past 10 years, and a 60% increase in fatal accidents related to mobile phone use. The charity emphasised that businesses in particular must take more action on the issue. At the same time, the RAC has reported that a quarter (25%) of drivers admit to illegally making or receiving calls while driving, compared to 24% in 2017, despite the introduction of tougher penalties for illegal phone use in March 2017.

Can technology solve our pothole crisis?

Earlier in the year, the Department for Transport announced £22.9 million for research and trials on new surface materials and pothole repair, which includes money for testing the effectiveness of plastic roads at deterring potholes forming, and a study using geothermal energy to keep car parks from freezing over, which is often a key factor in the development of potholes. Cycling UK also ran our inaugural 'Pothole Watch' during the first week of March, highlighting the problems potholes pose to cyclist. Throughout the week, we saw a 100% increase in the number of potholes reported via Fill That Hole, with a pothole reported to the relevant authority every 15 minutes via our online tool.

A Unicef UK survey has revealed that child health experts believe the public should be more concerned about the negative impact of air pollution on children’s health, while a European Environment Agency ‘stocktake’ highlighted that air quality disproportionately harms poorer regions throughout the continent. We’re glad to see that Glasgow City Council has been trialling car-free zones outside of schools, a move supported by nearly two thirds of teachers according to a Sustrans survey, but it’s clear more must be done to move towards cycling and walking as the primary forms of everyday local transport - tackling air pollution and a range of other problems at the same time.

This new strategy includes plenty of cycling (there’s even a cargo trike on the front!), and we’re glad to see that many of Cycling UK’s recommendations in the response we submitted to the original consultation are included. The strategy includes sound principles and bold ambitions, but we'll wait to see the action which follows before being convinced that a car-free future is just around the corner. More information and thoughts can be found on Roger Geffen’s blog.

The 'long eye of the law' finds public approval

New technology trialled by Gloucestershire police, enabling the detection of speeding, tailgating and mobile phone use from up to 1km away, clocked over 1,000 speeding incidents over a one month trial, and has also been supported by 59% of respondents to an RAC survey. Only 28% of respondents were opposed to the camera, with a further 13% expressing no opinion. The RAC's press release contains more detailed breakdowns.

The providers of the Cycle to Work scheme, Cycle Solutions, have announced that the average saving is £230 per employee, with a 32% reduction in the cost of a new cycle and equipment for basic rate taxpayers. The director of Cycle Solutions, Steve Edgell, highlighted that, despite these savings, "the continued success of Cycle to Work...depends on cycling becoming cultural; right now it’s still seen as a sport in the UK, rather than a convenient mode of transport". There are also growing calls for the maximum value of the scheme, currently £1,000, to be raised to ensure that e-bikes are more easily accessible. 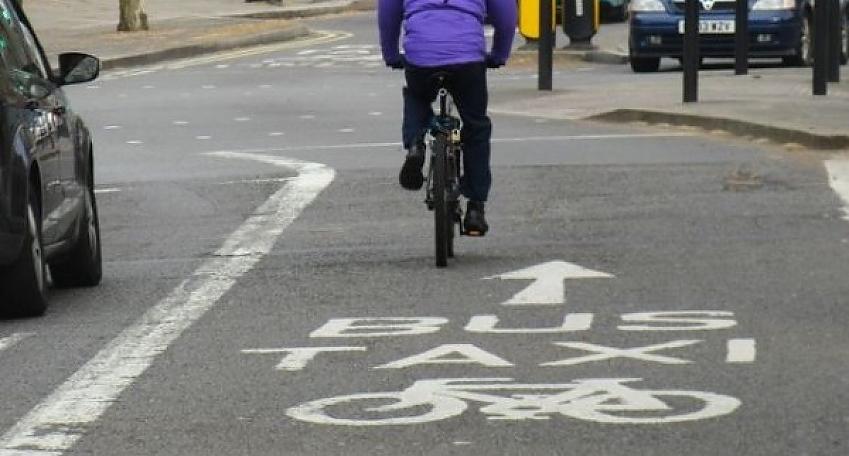 The cycle and bus lane at Friar Gate, Debry, which is under threat.

As part of an ongoing campaign against the scrapping of a cycle and bus lane - which is supposedly intended to, believe it or not, reduce vehicle emissions - has led local cyclists to highlight that the council's action are #strippingawayyoursafety by stripping themselves down to their underwear.  You can support their campaign here. 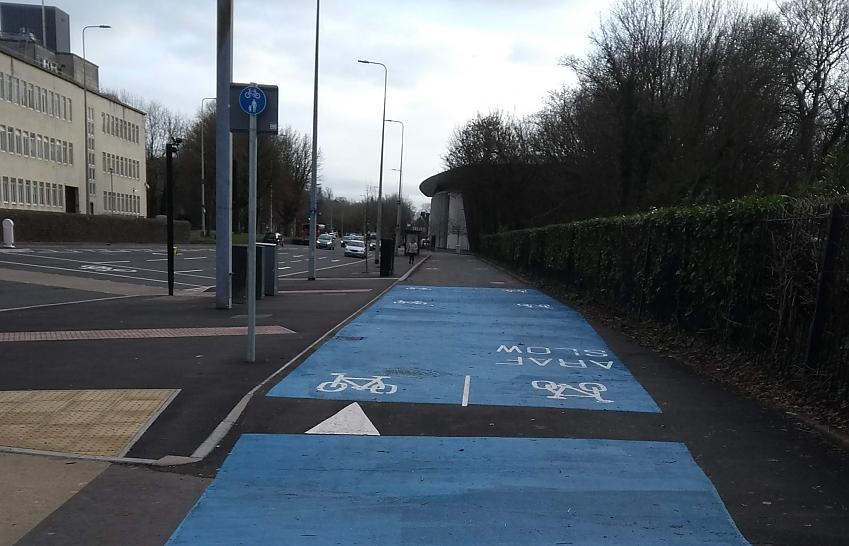 Since the last edition of campaign news, Cardiff now has its first segregated cycleway, which is one of five proposed segregated lanes in the city, which will provide a total of 24km of cycle routes to and from the centre. Cycling UK has long argued that segregated cycle lanes are key to encouraging more people to cycle, given that concern about safety is the main barrier to cycling.

Oxford cab passengers encouraged to look out for cyclists

New stickers in cab windows are warning passengers in Oxford to look out for cyclists when getting out of the cab, in a push to reduce car-dooring incidents in the city where over 25% of adults cycle at least three times a week. Car-dooring is a serious problem for cycle safety - keep your eyes peeled for new plans to help tackle the problem from Cycling UK in the coming months.

Dates for the Diary

Match the Miles - The Adventure Syndicate, 13-19 May

The 'long eye of the law' finds public approval; Cycle to Work scheme 'saves commuters £37 million a year'; Derby cyclists object to plans to #stripawayyoursafety; Car-free cycling for Cardiffians; Oxford cab passengers encouraged to look out for cyclists when getting out.