Summer is nearly over, which can only mean one thing: Strictly Come Dancing will soon be back on the telly. This year we should teach them the Local Cycle Campaigners' shuffle: take several steps forward, then nearly as many back again, then turn around. It's the Highways Hokey Cokey.

During August, the upbeat sounds from various national governments have animated our dance, but the actions of some local councils have wrong-footed us once again. In Kensington, Sussex and Poole (at least) we await the judges' scores, whereas in Cheltenham they are turning things around by appointing a Bicycle Mayor. Read on for the details (and keep dancing).

Jim Densham, Cycling UK's campaigns and policy manager in Scotland, has set out the key issues needing the new Minister’s attention during his first days in post.

Following on from last month's publication of the Active Travel Act guidance document, which prioritises Active Travel Network Plans being refreshed every three years, many Welsh councils including Anglesey, Cardiff, Ceredigion and Blaenau Gwent are now seeking feedback on their draft Active Travel Maps. The act places a duty on local authorities to promote active travel and requires them to consult with members of the public. The full list of consultations is available from the Commonplace website ('View map' - green button).

England - active travel funding up by one quarter

Just after July's Campaigns News went to press, the Westminster government announced an increase in funding for walking and cycling - which is now set to be £338 million -  25% more than announced in the 2020 autumn spending review. However, some local authorities that have prematurely removed cycle lanes that were put in with Emergency Active Travel Funding will not be eligible to receive further funds.

The Westminster government have also published a review of Gear Change on the anniversary of the original publication, with prime minister Boris Johnson's foreword stating that "schemes must be in place long enough for their benefits and disbenefits to be properly evidenced".

Public back online system to catch dangerous drivers in Scotland

Northern Ireland Infrastructure Minister Nichola Mallon has launched a public consultation seeking views on providing lighting on the Comber Greenway, a seven mile long traffic free route between Belfast and Comber.  Although it is a popular walking and cycling path for both commuting and leisure purposes, the number of people using it drop off during the evenings and in the winter months. Further details on the consultation are available. 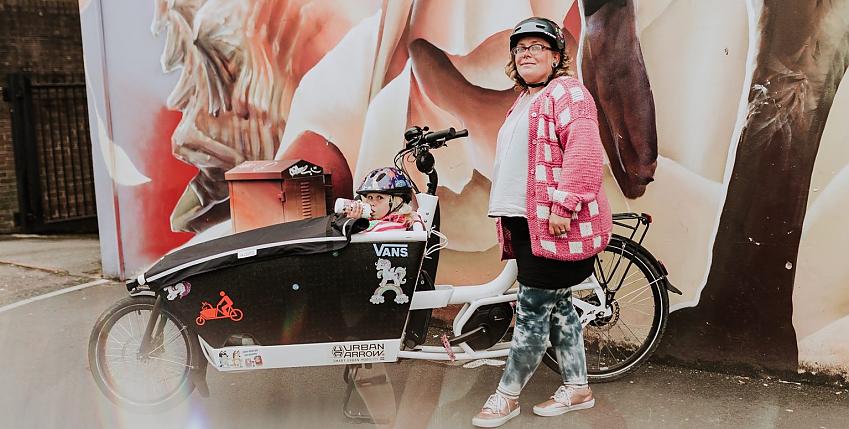 Bex Mountford joins a growing global network of volunteer changemakers as the new Bicycle Mayor of Cheltenham. Bicycle Mayors are selected for a period of two years during which they focus on addressing the main barriers to increasing cycling in their home town. Endorsed by Chris Chiswell, Cycling UK's Local Cycle Advocacy Network Rep, and Cheltenham and Tewkesbury Cycling Campaign, Bex says she is starting her tenure by meeting and talking with local women and families, attending council-led events events on the climate crisis and introducing people to the world of cargo bikes.

More than a third of English councils support policies that could increase carbon emissions despite having declared a "climate emergency", BBC research suggests.

Road building and airport expansion are among examples provided by 45 out of 121 questionnaire respondents who say they have passed climate motions. Environmentalists say the findings reveal "inconsistencies" in approach. Local leaders insist they are taking action but need more funding.

Cycling UK has joined several outdoor organisations calling for the Dalwhinnie level crossing in the Cairngorms to be reopened. Network Rail's decision to lock the gates at the crossing without warning has blocked access to a large number of tracks, hills and Loch Ericht, with the suggested diversion adding around four miles to a trip.

The Keyhole Bridge Group, a grassroots organisation, has been granted permission for a judicial review of Bournemouth, Christchurch and Poole's decision to reopen Keyhole Bridge. For those walking and cycling, the bridge provides access to three parks and a route to and from amenities including a hospital, college and a school, but many reportedly didn’t feel safe to use it because Poole Park had become a rat run, with 500 cars an hour passing through at peak times.  Despite the fact that council officer advice, the equalities impact assessment and public opinion all supported the filter remaining in place, the Transport Portfolio holder Mike Greene, was determined to scrap the scheme. The Keyhole Bridge Group are crowdfunding to raise funds for the cost of the judicial review - more information is on their CrowdJustice page.

The UK's biggest road safety event will take place 15–21 November 2021, with millions of people anticipated to get involved across the UK – from local communities to businesses, road safety campaigners to schools and families. By registering online, anyone can access an action pack of resources to help them take part and learn more about road safety.

Cycling UK will be responding, but you may wish to also put together your own response, especially if you've experienced a near miss involving a trailer.