CTC cycle campaigners from York do battle to retain the road layout at Water End junction, which includes an advisory cycle lane. Some local residents have claimed since it was introduce it has caused increased traffic congestion. Local campaigners are fighting for it to stay on safety grounds.

As part of the development, cycle facilities were installed on a link road between the A59 and A19. At one end, a short left turn vehicle lane was removed and replaced by an advisory cycle lane. This safely transferred cyclists from an off-road route to the traffic lights at an on road advance stop line. The scheme was completed during Liberal Democrats’ rule of the Council, and was supported by the then opposition, Labour.

But local elections then intervened.

The short cycle lane had been blamed for subsequent peak congestion and rat running and it was turned into a cause célèbre by all election candidates. The Labour group took control and found themselves landed with a pledge to undo the work. 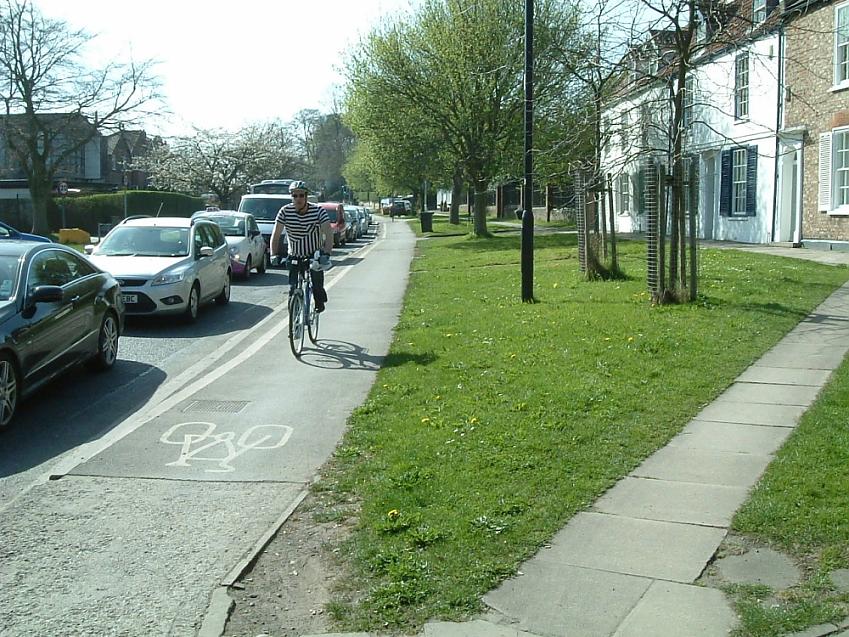 local cycle campaigners Paul Hepworth, Ron Healey and Richard Twigg, have united with local campaign groups to lobby for the retention of the existing safe arrangement.

This has also been supported by local Emergency Services, including the Fire Brigade and ambulance drivers.

Two alternative options have since been put forward, both of which worsen cyclist safety and require them to mix with motor vehicles as they approach the junction.

A public consultation on these brought 60% support for the existing arrangement, despite no formal "do nothing" option. This was largely due to Paul and Ron leafleting cyclists at the junction. Paul also vigorously argued CTC's case at several council meetings.

The debate has now been elevated to the Council's Cabinet, when a final decision is expected. Green Party councillors have garnered sufficient support to "call in" a decision for further scrutiny, if change is agreed by the Cabinet on April 3rd. So watch this space - our campaigners continue the battle.