Debbie and Steve are bitten by the ride to work BUG

Debbie Greenfield became a bike commuter thanks to a cycle to work day
By Tony Upfold
Friday, 10 June 2016

Debbie and Steve are bitten by the ride to work BUG

Debbie and Steve both enjoy the benefits of fitness and fresh air by using pedal power for their daily commute to the Harwell campus in Oxfordshire’s ‘Science Vale’.

They are among 800,000 people in the UK who cycle to work every day – a figure Cycling UK aims to swell by half-a-million during Bike Week, which runs from 11-19 June.

Debbie and Steve are both members of HarBUG (Harwell Campus Bicycle Users Group), which campaigns to make it easier for people to cycle to work and to improve facilities for those who do so, by persuading employers to provide such things as showers, drying rooms and secure bike parking.

Those ambitions tick all the boxes when it comes to Cycling UK’s Bike Week, which aims to promote everyday cycling for everyone through a series of nationwide events, with a specific ride to work theme this year.

Cycling UK has various handy hints for employers and existing cyclists to encourage people to get on their bikes this summer, from holding cycle to work days and organising ‘buddy rides’ to accompany new cyclists, to hosting bike breakfasts and putting on ‘Dr Bike’ mechanic sessions at work.

Debbie Greenfield was one of those who became a bike commuter thanks to a cycle to work day.

Since I started cycling to work I’ve become much keener – last year I bought a new bike and cycled to Edinburgh with a friend over six days, covering 60 miles a day, and this month I’m cycling to Bristol and back with a few friends.”

Debbie, who has worked at Harwell for 32 years, had done little cycling in her adult life but then got involved in a ride to work day organised by HarBUG, which included a tasty bike breakfast on arrival.

She said: “That cycle to work day helped get me going on a bike. I only live about three miles away in the village of Harwell, so it is no great distance to commute to my workplace at the Rutherford Appleton Laboratory, but I love the exercise and being out in the fresh air, especially when you have been in an office all day.

“I cycle to work for about six months of the year. HarBUG holds a cycle to work day in April, which is my spark to get on the bike with the clocks changing and the days becoming longer and warmer.

“Since I started cycling to work I’ve become much keener – last year I bought a new bike and cycled to Edinburgh with a friend over six days, covering 60 miles a day, and this month I’m cycling to Bristol and back with a few friends.

“It would be great to see more people cycling to work during Bike Week and hopefully continuing to do so throughout the summer and beyond.”

HarBUG organised its most successful cycle to work day so far on 20 April this year, with over 120 cyclists from 20 Harwell campus organisations taking part. It will be holding another one on the Wednesday of Bike Week (15 June), with escorted rides for anyone interested followed by a bike breakfast, plus free cycle maintenance from The Bicycle Repair Man on the campus.

Such events prove that Harwell has certainly got the BUG when it comes to cycling.

And Steve Wollen is another employee who has taken full advantage of the cycle-friendly approach that exists at the campus, thanks in large part to the work of the Bicycle User Group and the positive reaction of the management at Harwell.

Steve (below) retired from the Fire Service after 30 years in 2015, having held the rank of Station Commander, and went to work at the National Theatre in London. Much as he loved his new job, the four-hour daily commute “did his head in” and he decided to find employment closer to home. 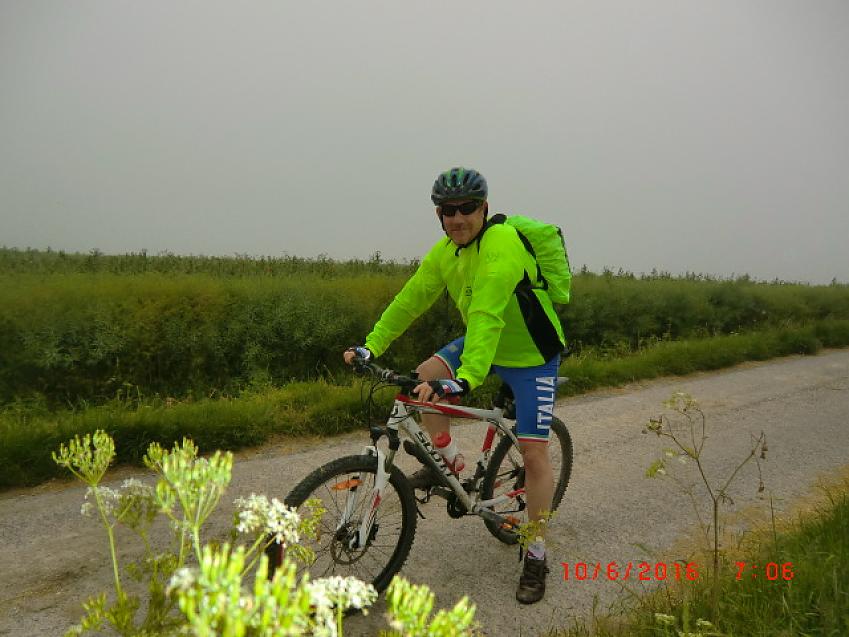 He now works as Fire Safety Advisor overseeing the 70-odd buildings on the Rutherford Appleton Laboratories site at Harwell – and his commute involves a refreshing bike ride of about four miles each way from his home in Didcot, about a third of the journey on a disused railway track with the rest on ancient byway and a few minor roads around the Harwell Campus.

Steve said: “I found out about the Bicycle User Group at Harwell through my wife. She is a beauty therapist and one of her clients is married to Kevin Wilkinson, the chairman of HarBUG.

“I wanted to cycle to my new job but was concerned about things like having a shower when I got to work, changing clothes, having a drying room for my cycling gear and so on. When I looked on the HarBUG website I saw that all those things were provided at Harwell, which is so useful.

“My brief time in London is in the dark and distant past. I can now cycle to Harwell, shower, change and be fit and fresh for an 8am start at work – having watched the A34 crammed with cars and frustrated drivers on my way in.

“At the age of 52, cycling is great for my health and it’s so nice to get out in the fresh air. Hopefully other people will get that message and use Bike Week as a springboard to cycle to work, not just at Harwell but all over the country.”

Cycling UK’s Bike Week Coordinator Jonathan Sharpe said: “Almost half of the UK’s working population live within five miles of their place of employment, but only 2% of all trips in the country are made by bike – so we believe there’s a vast, untapped source of potential cycle commuters out there.

“Cycling saves you money, burns calories and cuts carbon – so it’s good for your health, well-being, the economy and the environment. What’s not to like about that?

“Our aim is to get another half-a-million people cycling through Bike Week and beyond. There are hundreds of events throughout the country to inspire people and show how cycling can so easily become a part of their everyday life – whether it’s for fun, as a means of getting to work or school, to get to the shops or to visit friends.

“Bike Week is the nation’s annual celebration of cycling and we want to make it bigger and better than ever in 2016 – and don’t forget to take our Bike Week Pledge for your chance to win some amazing prizes.”