The approximate location on the A1035 where Tim Andrew was hit
By Chris Peck
Wednesday, 20 June 2012

An HGV driver who killed a cyclist while speeding with a "smudged" windscreen has received a worryingly lenient sentence. This is yet another case which reveals the inadequate workings of the judicial system.

Tim Andrew was cycling along the A1035 near Beverley, in the East Riding of Yorkshire, when he was hit by a lorry driven by David Grogan, at around 0640 in the morning of the 14th October, 2010.

Grogan was convicted of causing death by careless driving, but the judge, despite declaring the case 'serious', only sentenced him to community punishment, with a 12 month jail sentence suspended (ie, not served unless another crime is committed), 18 month driving ban, 8 penalty points and a community punishment.

Most outrageously, the Judge declared in the case that Mr Andrew's light was 'dim', and apparently weighed this up against the facts that Mr Grogan was over the speed limit and driving with an obscured windscreen. The implicit assumption was that Mr Andrew was somehow at fault, despite being legally equipped (he was also wearing a high visibility jacket, which is not required by law), even though Grogan was breaking the law in two different ways.

For the most serious cases of 'causing death by careless driving', the sentencing range given in the guidance is between 36 weeks and 3 years custody. Put simply, the judge in this case utterly failed to follow the sentencing guidelines of immediate custody. For some offences unduly lenient sentences can be challenged, but causing death by careless driving is not one of those. 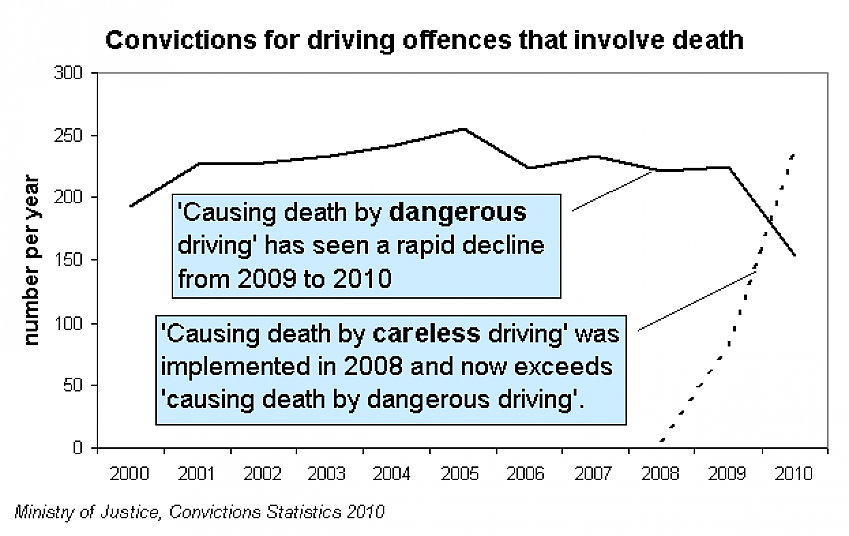 The effect of this change has been that there has been an immediate fall in the proportion of those who are convicted of killing through bad driving being sentenced to immediate custody. By comparison there has been no change in the proportion of offenders convicted of other offences, such as violence or sexual offences. It is only amongst motoring offences that we are seeing a creeping leniency in sentencing emerging - as demonstrated in the graph below. 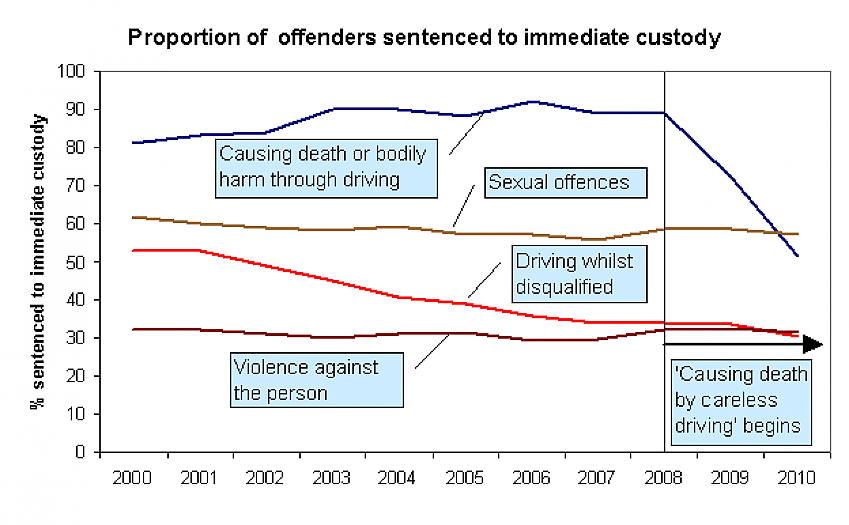 Tim Andrew's case is a good example of what is happening more widely: a gradual diminishment of the punishment given to poor, lethal driving behaviour, through a combination of incorrect charging ('causing death by careless driving') and lenient sentencing by judges. CTC's Stop Smidsy campaign is gathering evidence from cases like these to show how the legal system is letting bad drivers off the hook and contributing to a deterioration in road user behaviour.