Time to fight off the blues following Christmas and the New Year, and a ride towards the east coast with a view to visit Lincolnshire's only thatched church at Markby. Assembling at the Meridian Lesisure Centre were today's Ride Leader Tim Newbery, John Rickett, Alan Hockham, Jason Bartup and Rob Whitworth.

A fine dry day, temperatures expected to reach 8 or 9 degrees Celsius which is a little above average for the time of year. The route today would take us through Stewton, the Carltons and Withern before passing Woodthorpe where we met up with Chris Owen, clad in bright hi-visibility yellow clothing (as indeed were most of us). A brisk south west wind certainly made it feel a little cooler than the temperatures might have suggested, although Rob was clearly feeling the warmth of an extra layer of clothing recommended by Jean. Rob still suffering from a cold.

Onwards through Hagnaby and Hannah and arriving at Farmer Brown's Ice Cream Parlour ahead of schedule. Certainly quiet - very quiet. A sign in the window indicating 'CLOSED till 10th January'. Ooops. Our intrepid Ride Leader had missed the fact that an alteration to the opening times had been posted on the website at Christmas. No ice creams today! Sorry guys.

Time then to set off and head to Markby whilst unexpectedly meeting up with Paul Linder who was out on his travels. A pause to view the only thatched church in Lincolnshire and one of only a handful in England. This Anglican church is dedicated to St. Peter and stands on the site of an old Augustinian Priory, and in fact is partly built of stone rescued from the Priory ruins. The church bell is likely to be the earlier Priory refectory bell whilst the Norman dog-toothed decoration on the chancel arch also dates from the original 12th century church.

Sadly, nothing now remains of the Priory itself. Founded in about 1160 by Ralf FitzGilbert, it was later dissolved in 1536 under the ‘Dissolution of the Monasteries’ by Henry VIII. There are some intriguing accounts of the community of canons that once lived here; tales of intrigue and scandal! The visitation of Bishop Alnwick in 1438 for example, shows this Priory to have been in a worse condition than any other in the county. In his report the bishop stated that he had heard of many excesses ‘both in religion and in the observation of rule, and in administration’; and when he came he had found his worst expectations fulfilled, ‘not even the shadow of religion,' he said, 'but debts, drinking, and suspicion of even worse sins'. It was disclosed that the canons went out without leave, ate and drank in the town and two went constantly to taverns, whilst one canon, Thomas Dugby, was suspected of sinful intercourse with a woman at Markby!

Visits completed, Jason having pointed out memorials to RAF and RASC personnel from WWII and Rob discovering a memorial to a fellow 'Whitworth', a decision was made to head for Woody's Bar and Restaurant at Woodthorpe for lunch. Paul would join us too. Splendid service and hot refreshments enjoyed by all, Paul opting for the generous sized Vegetarian Brunch.

Both Paul and Chris would soon depart whilst the remainder of the group tackled a return route to Louth suggested by Jason, heading for Claythopre, Muckton and Little Cawthorpe. By this time the cloud was clearing and we enjoyed some pleasant winter sunshine.

Arriving back at the Leisure Centre at 2.30 pm having covered 37 miles (60 km) with enough time to spare for a double shot latte for Rob to aid recovery. Many thanks to all for their company. Get better soon Rob. HAPPY NEW YEAR.

Next week it Alan's ride to Northcotes and Wold Newton. 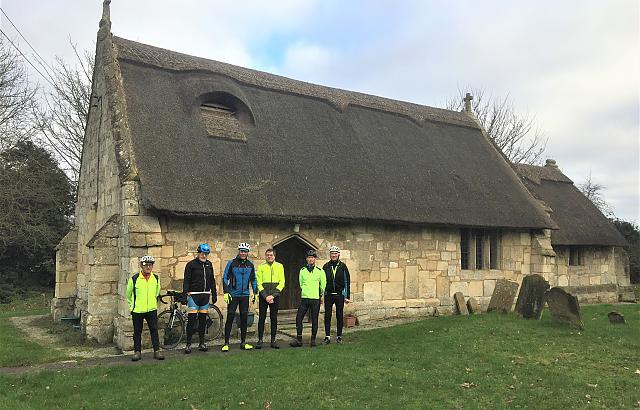 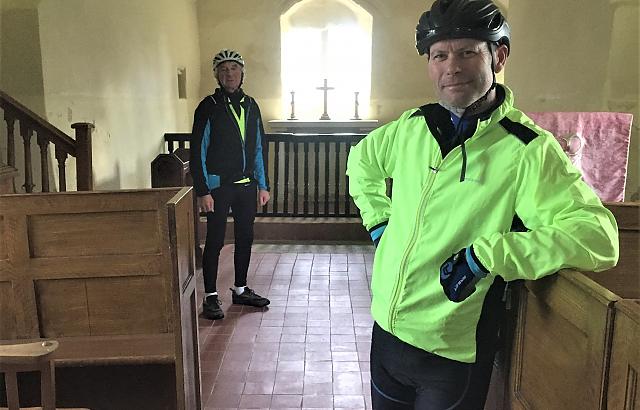 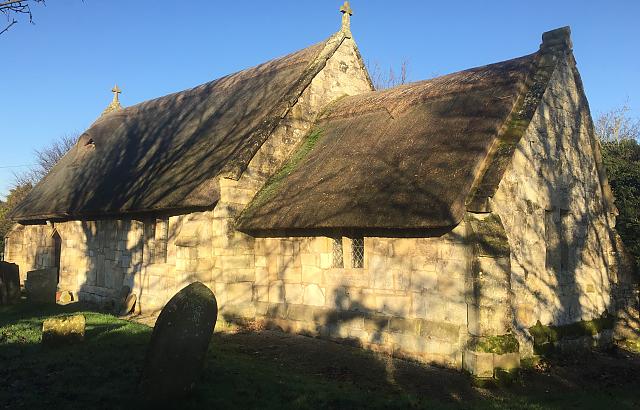