Our annual outing to visit the folk at Northcotes Flying Club for their Brass Monkey Fly-In. Always weather dependent and as a band of heavy rain and showers were forecast for the morning, prospects didn't look too good.

Gathering at the Leisure Centre in Louth were Rob Whitworth, Jason Bartup, John Rickett, Tim Newbery and today's ride leader Alan Hockham. Reg Bagshaw had hoped to meet up with us en route. Having had a passing shower, the skies had brightened up so Alan took the lead for the routing through Keddington and Alvingham where we did indeed meet up with Reg.

Continuing through the Covenhams and past the reservoir, the roads were still wet with deep puddles to navigate around. Never the less good progress was made all the way to North cotes upon which time the sun disappeared and darkening skies foretold the heavy deluge of rain encountered as we made our way along Sea Lane to the Aerodrome. No escape this time and we were pleased to eventually take refuge in the Cafe looking forward to hot drinks and bacon sandwiches. Delighted to meet up with Jim and Barry who were there to take photographs of the flying, just required a bit of a wait until the rain cleared away.

The former RAF Station has a wealth of history and there's a small but fascinating museum documenting the operations through the First World War and Second World War. Sadly on this occasion we weren't able to spend enough time to do it justice and will need to return for a more leisurely look around. Perhaps for their Spring or Summer Flying Meetings in May or July.

However both John and Jason had separately mentioned to Tim that we would be cycling along 'Kenneth Campbell Road' and the intriguing and poignant story behind the attribution.

After the German battle cruisers Scharnhorst and the Gneisenau arrived in the port of Brest, the RAF had mounted a series of bombing attacks, none of which brought conclusive results. On 6 April 1941 Coastal Command ordered an “at all costs” attack using three aircraft carrying mines to first breach the expected torpedo nets and to silence the flak ships. Three torpedo bombers would follow this wave and attack the Gneisenau.

22 Squadron were detached to RAF ST Eval in Cornwall and following heavy rain that had drenched the airfield, the bomb-carrying aircraft became bogged down and couldn’t take off. Also because of a sea mist, the other three Beauforts arrived at Brest independently. Flying Officer Kenneth Campbell flying Beaufort N1016 OA-X as part of the second wave, arrived at the grouping point off the harbour alone and no other aircraft joined him. He then launched a single aircraft attack against the target knowing that the defences had not been eliminated. He flew directly into one of the most heavily defended targets in the region, encircled with up to one thousand anti-aircraft and other guns, in order to attack the German battleship Gneisenau and launched a torpedo at a height of just 50 feet.
The attack had to be made with absolute precision: the Gneisenau was moored only 500 yards away from a mole in Brest's inner harbour. For the attack to be effective, Campbell would have to time the release to drop the torpedo close to the side of the mole. That Campbell managed to launch his torpedo accurately is testament to his courage and determination. The ship was severely damaged below the waterline and was obliged to return to the dock whence she had come only the day before; she was put out of action for six months.

Generally, once a torpedo was dropped, an escape was made by low-level jinking at full throttle. Because of rising ground surrounding the harbour, Campbell was forced into a steep banking turn, revealing the Beaufort's full silhouette to the gunners. The aircraft was severely damaged by the flak and crashed into the harbour, killing all on board. The likelihood of this outcome would undoubtedly have been known to the crew.

Campbell must have been incapacitated by the flack for when the aircraft was later salvaged by the Germans, they found the body of “Jimmy” Scott, the Canadian navigator, in the pilot’s seat. 19-year-old Canadian Sergeant James Scott was one of the very first Commonwealth Air Training Plan Graduates to go on operations in Great Britain. When he first arrived in England, he was one of a group of Canadian airmen who had tea with the Queen at Windsor Castle.

All four crew members were buried by the Germans with Full Military Honours in the grave of honour in Brest Cemetery. Local French Patriots eventually managed to inform the British Government of Kenneth Campbell’s valour and he was awarded a posthumous Victoria Cross. James Scott was awarded the Distinguished Flying Medal.

Barry kindly took the obligatory group photograph (thanks Barry - lots more on Barry's Facebook page) and we would then leave Jim and Barry to wait for the flying to start (skies were indeed brightening nicely). The group by prior arrangement split soon afterwards with Alan, Rob and Reg heading for Louth and Grimoldby whilst John, Jason and Tim continued for the route to Wold Newton.
A strong westerly wind had picked up and it was hard work pushing on to Grainsby Local airports were registering gusts of 38 mph, quite a lot more than forecast.

Tim was more than happy to take a break at St Nicholas' Church, Grainsby as Jason hadn't visited before and enough time to view the commemoration of the Lancaster crews who perished nearby on the tragic events of 'Black Thursday' - 16 December 1943 - when bad weather caused 25 aircraft to crash following a raid on Berlin.

Climbing now all the way up to about 110 m but the reward of tea and magnificent home made cake served by the ladies of Wold Newton Village Hall. Apparently there was 'standing room only' in the morning and we had timed our visit perfectly. We also met up again with Jim and Barry.

The last leg of today's ride and at last a fast descent of North Elkington Lane. Exhilarating. Leaving John at Fotherby, Tim and Jason returned to the Leisure centre, the last part along the old railway track.

A fine day out after a wet interlude!
Many thanks to all and to Alan for leading. 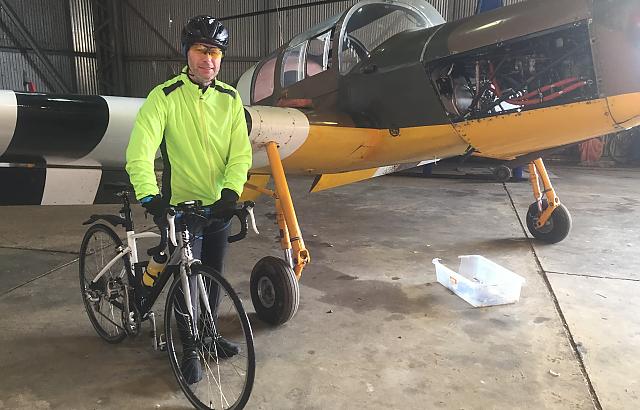 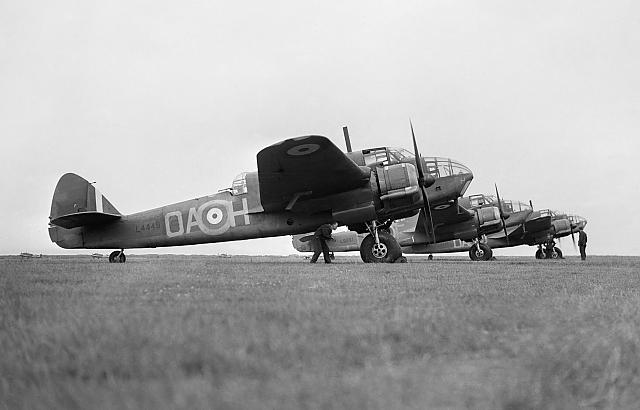 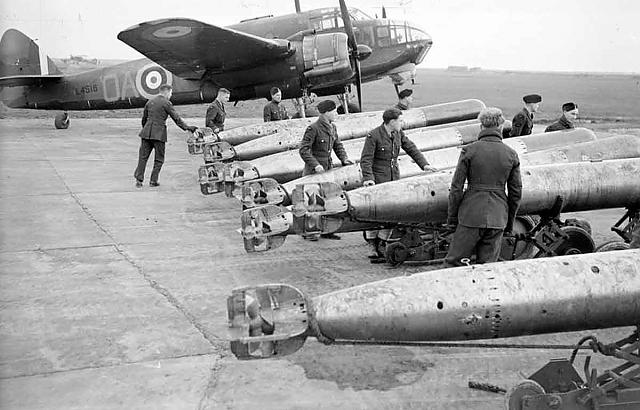 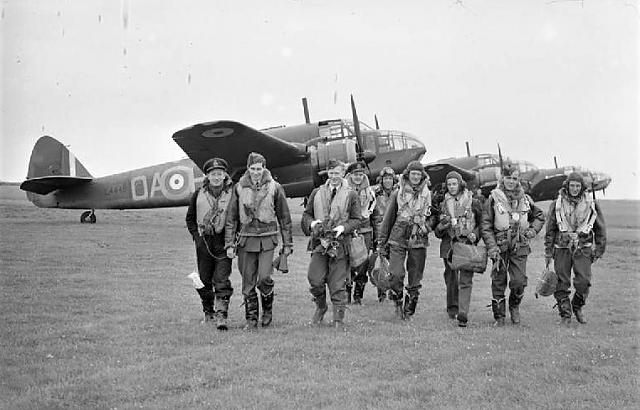 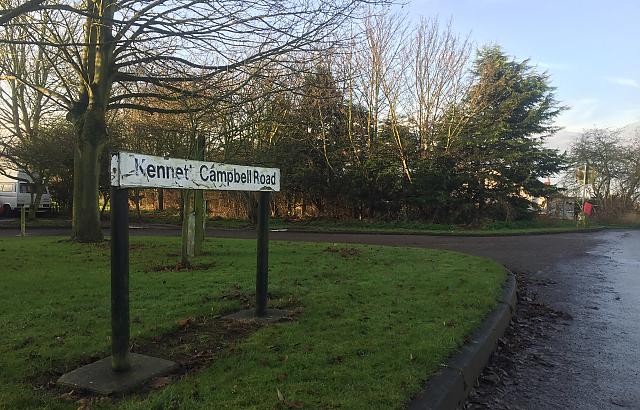 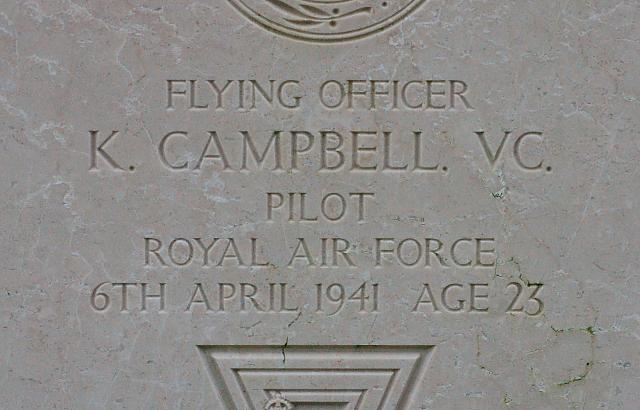 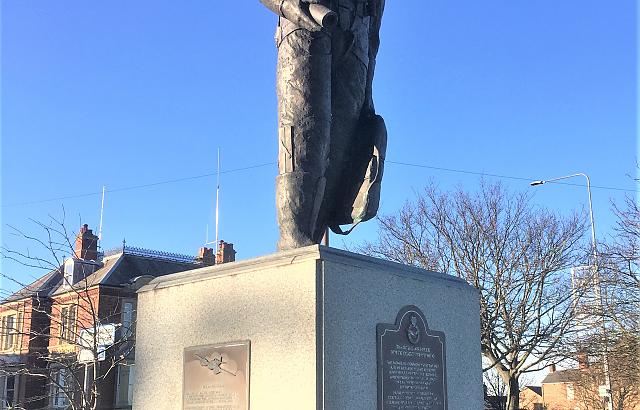 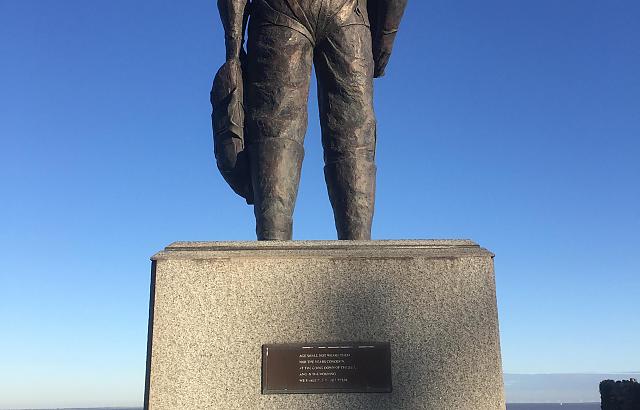 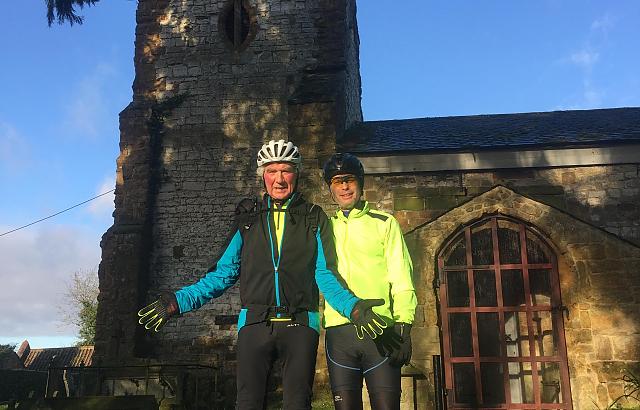 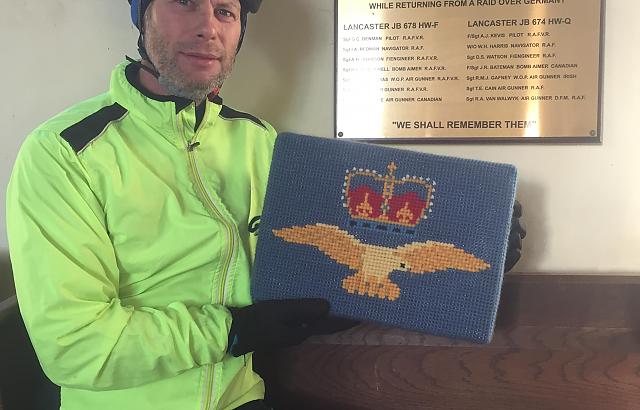