There's still not a great deal going on at the moment with your club but hopefully there's a bit of light at the end of the tunnel.

We're supposed to have an AGM on or before the 31st March this year but due to the extraordinary circumstances and the Covid 19 restrictions, this would have to be virtual. Our club secretary Tony Stott has asked the current committee to stand again for another year, that is, till the 31st March, 2022. This will be for the positions of Chairperson, Secretary, Treasurer, President, Vice-President, Racing Secretary, Welfare Officer, Webmaster, Communications Officer, Social Secretary, Magazine Editor and at least three other places to make up a committee of no more than 12 members. Everybody on the current committee has agreed to volunteer again for another year in their current role. However, if anybody else wants to stand for next year's committee, they need to inform Tony, preferably in writing (email is fine) no later than a week before the 31st March, 2021. If this is the case, an arrangement will have to be made, or potentially, a vote will have to be implemented.

Also, if anybody has any Motions they want to propose about our club's constitution for the coming year, they will similarly have to inform Tony, in writing, no later than the 24th March, 2021. If there are any queries, Tony's phone number and email are accessible on the club's website.

Tony hopes these proposals are acceptable and agreeable for everyone, but if anybody objects, please inform him. He will be sending three attachments to the committee members - the Minutes of last year's AGM, the Secretary's Annual Report and the Treasurer's Report. If anybody else wants to receive any of these attachments, they will have to ask Tony for them. The Annual Report will be printed in the next magazine, whenever that will be.

Under Covid 19 law, group rides are still not permitted but hopefully by Easter, groups of up to six will be able to meet once again. Previously these rides were on an ad-hoc basis, with no club organisation. It is not expected for normal group rides to recommence until mid May at the earliest but likely not until late June or early July. The Cycling UK website has a comprehensive guide to cycling during the coronavirus pandemic which is regularly updated.

It has been decided that the Super Tourist competition will not be held this year.

Even through the snow and ice, our own record holder Ian Appleby has been out on his bike just about every day.

Just to remind you, we have our own Instagram page. Go and have a look through some of the old and quite interesting photos. Don't be shy everyone! 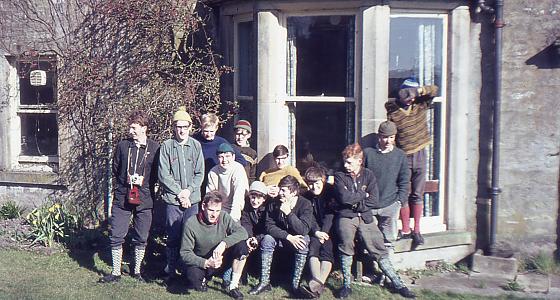 That's all for now but hopefully the next newsletter will have a bit more substance to it. Until then, happy cycling.