Before the pandemic, Kat Young spent two weeks cruising down the Atlantic coast of France on the cycle tracks of EuroVelo route one

Aribbon of smooth tarmac stretches out beneath my wheels. The smell of the tall pine trees intermingles with the salty air of the sea. It’s 10am, 20°C, and the sun beats down onto my now-bronzed arms. A baguette is strapped to the top of my tent on my pannier rack. My legs pedal as if that is the only motion they know. I am still several hundred kilometres from the Spanish border, and in this moment there is nowhere else I’d rather be…

Maps hold a near inexhaustible draw for me. I can pore over one for hours as the details and the contours come alive in my mind. So I was delighted to discover a map of Eurovelo routes. When choosing where to take my bike for a summer tour, time limitations and my no-fly preference pushed the French portion of EuroVelo 1, the Vélodyssée, to the top of my list.

Come August 2019, I rolled my bike off the ferry at Roscoff, a small town on the northern coast of France. The morning sun made me shed my jacket. Layers stripped off, I became acquainted with the Vélodyssée signs that I would follow for the next two weeks. 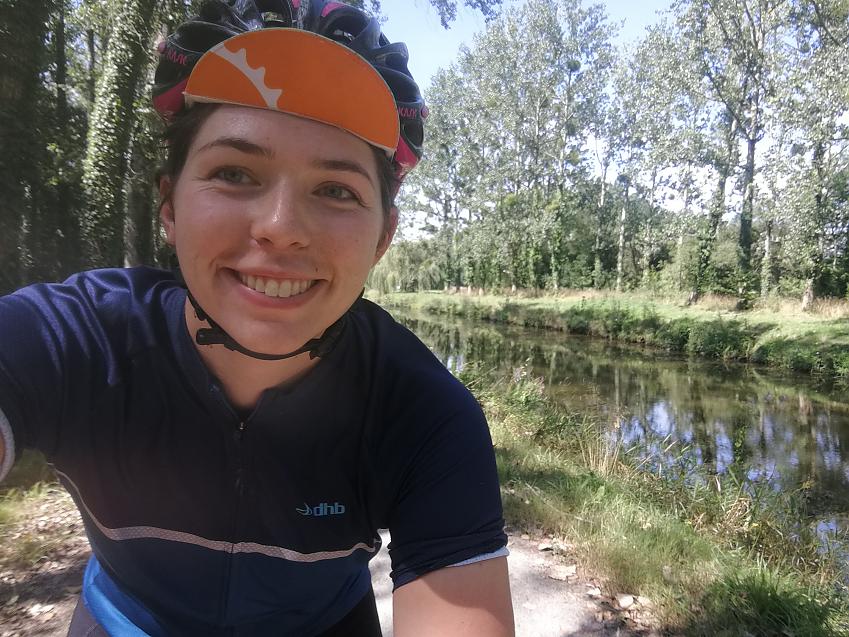 In my head the route is roughly split into three parts. The northern third largely follows the Brest-Nantes canal. This took me past hundreds of lock houses, which varied from boarded-up sheds to flower-adorned cottages hosting summer  arties. The dust of the canal path mixed with my sweat and sunscreen to form a slick paste; I would find myself eyeing up the canal for a quick dip.

During the first weekend I overstocked on food, assuming that France closed on Sundays. So I hesitated when I passed an open crêperie – but not for long. In fact, I stopped almost every time I smelled a boulangerie. I think my greatest achievement was, one Monday, riding 20km per croissant.

The middle third of the route, from Nantes to Royan, weaves its way south on minor roads, greenways and light gravel trails. Municipal campsites offer good value for cycle tourers, and I revelled in the flexibility that camping gave me. One day I woke up feeling pretty drained and the heatwave was set to stay above 35°C, so I only cycled 40km before stopping at a campsite with a swimming pool. The owner politely reminded me to shower before going for a dip. 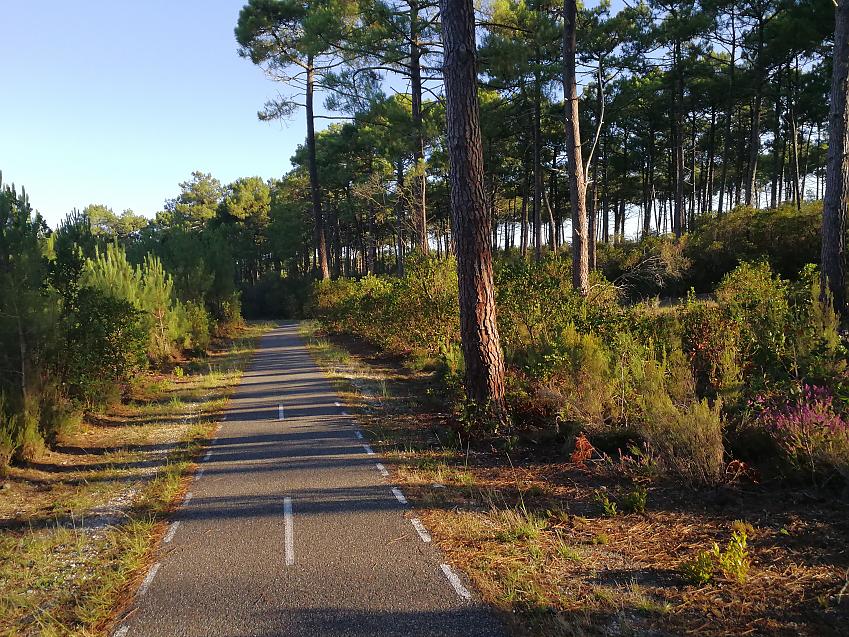 The tide-dependent Passage du Gois provided a spike in adrenaline as I slightly misjudged my timing and ended up pedalling at top speed to reach the other side before the sea reclaimed the road. This drama aside, the Vélodyssée is a refreshing antidote to the extreme adventures plastered over social media, where the more you suffer the more ‘epic’ your experience. There was minimal suffering involved on my tour yet I still found it fulfilling, finishing each day with contentment and the satisfaction of feeling the miles in my legs.

I immersed myself in the meditative motion of pedalling across the country, and found enjoyment in the interactions with people along the way. Travelling solo by bicycle can open you up to chance interactions with strangers who might otherwise have kept their distance; it makes you more approachable, perhaps even seem vulnerable, with your worldly possessions strapped to a metal frame. My pretty average French helped in this regard. I was secretly thrilled at the days when all my conversations passed in French.

One rainy morning I was huddled beneath a balcony in Rochefort, clasping my paper cup of coffee and munching on a pain au chocolat. A handsome, weather-beaten man approached and asked where I was riding to.

“Espagne…” I offered, expecting the widening of eyes and nods I’d become accustomed to from non-cyclists who didn’t understand why anyone would
want to cycle so far.

“Ah, sur la Vélodyssée?” he asked, becoming more animated. It transpired that he had ridden most of the route more than once, and he offered tips about the upcoming sections. His accent was thick and I had to ask him to repeat himself a few times, to which he graciously acquiesced. He bought me another coffee then left me to it, disappearing with a cloud of cigarette smoke in his wake. 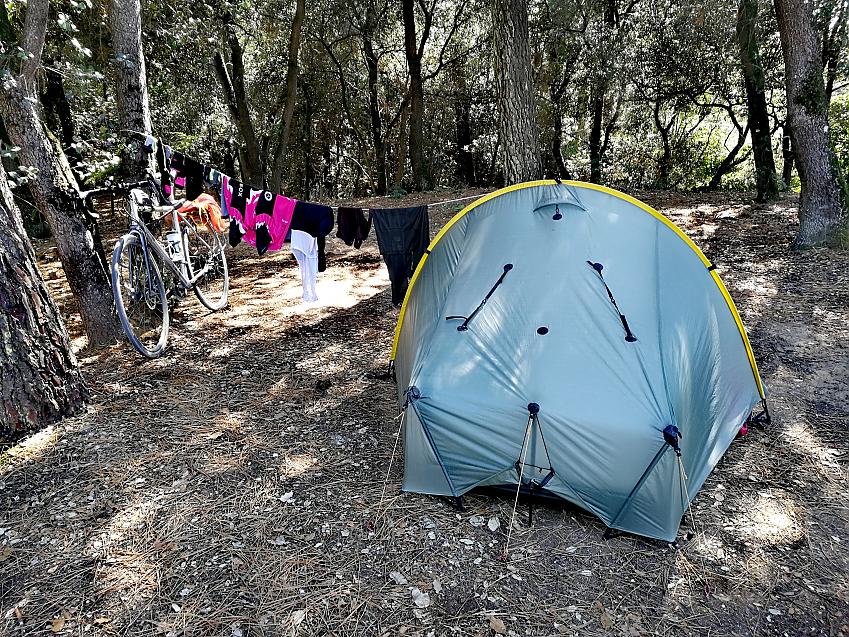 The southern third of the Vélodyssée, from Royan to Bayonne, offers smooth bike paths in amongst seemingly never-ending pine forests and white beaches. I was treated to stunning sunsets over the Atlantic, as I usually camped near the beach, then sat on the dunes looking out to sea. One of these evenings was on the largest sand dune in Europe, Dune du Pilat. The pleasure boats far below in Arcachon Bay danced in the setting sun.

Meeting other cycle tourers was less frequent in the south, so it felt like I had the bike trails all to myself. I revelled in the quiet of the pine trees; leaves rustling in the fresh sea breeze and the whirr of my wheels over the paved path. My reverie would be broken by small towns along the way, where I was joined on the trail by locals, ranging from the perfect stereotype of an elderly Frenchman in a beret with a baguette in his front basket, to kids pushing the boundaries of their parent-defined territory.

The Pyrenees start as little bumps on the horizon but tower over you by the time you reach Hendaye. There was no end marker to be found so I pedalled across the border to finish my journey in a little Spanish café with truly terrible coffee. France: end to end.

The Vélodyssée is a love letter to cycling, the French countryside, and the power of pastries. It’s a gateway to slow travel that’s only a ferry ride away. Fingers crossed it won’t be too long before it’s accessible again. 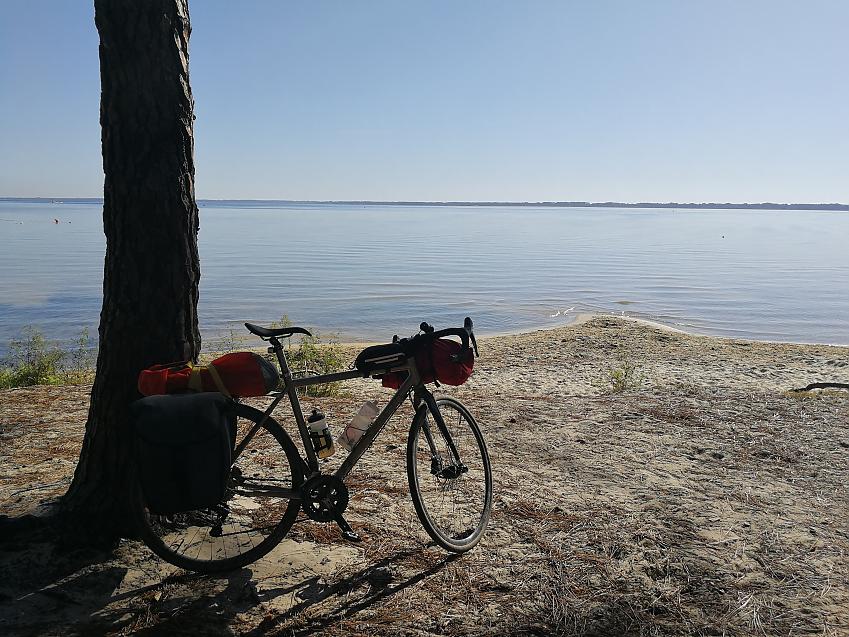 Do it yourself :EuroVelo routes

The Vélodyssée sometimes takes great pains to avoid traffic. You can avoid some rough or long detours by going onto a nearby (quiet) road. See the French part of EuroVelo 1, including maps and GPX files.

Distance: 1,200km, averaging 100km per day. I got to and from the start/finish by ferry and trains.

Route: The Vélodyssée starts at Roscoff on the north-west coast, heads inland to Nantes, then hugs the Atlantic coast to the border with Spain.

Accommodation: I camped at €5 municipal campsites in the north and at more touristy (and expensive) sites in the south.

Navigation: I had the GPX route on my cycle computer but it’s signposted too.

If I did it again: I’d fit 32mm tyres instead of 28mm for extra comfort on towpaths.