Before gravel bikes, and before fat bikes before them, fixed-wheel bikes had their own moment in the industry spotlight. Most brands made one. Now they’re back in their niche as simple, durable, metropolitan transport. Fixies (it’s as good a name as any) also get used for winter training, audax riding, time trialling, and, of course, all track cycling. But the focus of this test is urban runarounds. 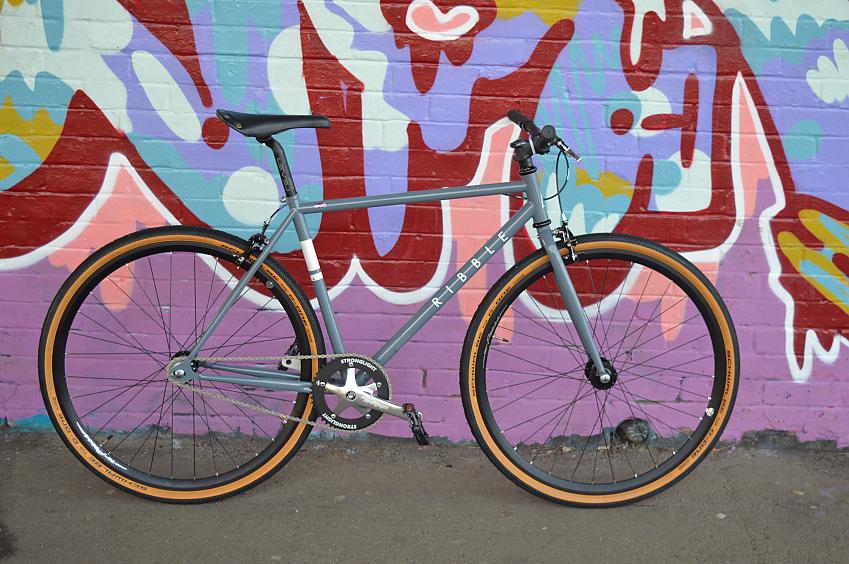 First look: A comfortable urban fixie with great tyre clearance but no frame fittings and an impractically high gear

These are, or should be, a different breed from track bikes. Two brakes are a legal and practical necessity on road. The fixed sprocket, with which you can slow down by back pressure on the pedals, only counts as one. Some fixie riders will want a ‘proper’ rear brake as well (making three brakes), while singlespeeds with a freewheel must have a rear brake as well as a front one.

Ribble’s Urban 725s looks ready-made for London hipsters, with a minimalist frame, a riser bar, and tan-wall tyres. These tyres are huge for a fixie – on which, more later. The Ribble Urban 725s costs from £599.

Mango is primarily a singlespeed marque. The brand was launched on the back of its Original Single Speed (£345). Level2 models have nicer components and start at £500. The shiny chrome Level2 Arcol tested costs from £530.

The Ribble’s frame uses Reynolds 725 tubing: chrome-moly that’s heat-treated for greater strength, which is no bad thing for an urban hack. Frame and (cold-worked) chrome-moly fork are designed around 73mm-drop brakes, so the clearances are huge. You could fit mudguards even over this bike’s nominally 40mm wide tyres.

At least, you could if there were any mounts… The Urban 725s is clearly a bike for those who value ‘clean frame lines’ above clean trousers. There are no frame fittings for anything, aside from brakes. A bottle cage isn’t vital around town, and I can live without a rear rack; you want a fixie to be fairly light and easy to accelerate. But mudguards are a must for year-round riding. P-clips would work. A neater solution would have been hidden mudguard mounts on the inside of the fork legs and seatstays. 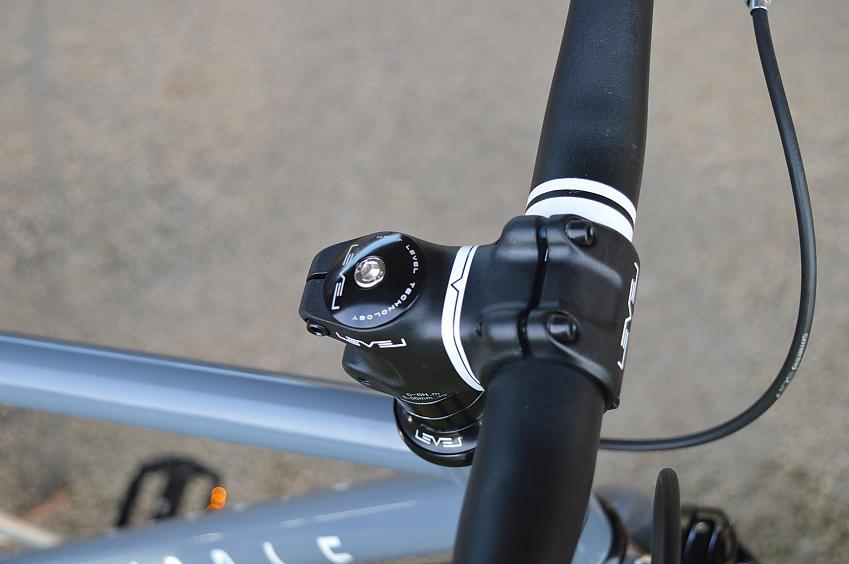 A short stem and riser bar on the Ribble work well with a long top tube, giving a comfortable reach without sacrificing toe clearance

Minimalism means no chain tugs either. These are helpful for getting the chain tension and wheel alignment right on a fixie, and they prevent you pulling the wheel over by accident when stomping hard on the pedals. You could easily add chain tugs, but if there were threaded holes in the dropouts for Allen bolt adjusters, you wouldn’t need to. The rear brake runs internally; I’d prefer band-on cable stops instead, for ease of access and, if desired, removal.

Aside from these quibbles, it’s a nice frame. The top tube and thus the front centres are long because it’s designed for a riser bar and a short stem. I had toe clearance even with my feet in a more mid-foot position on the supplied flat pedals.

The Urban 725s looks ready-made for London hipsters, with a minimalist frame, a riser bar, and tanwall tyres.

The Mango is also long in the top tube. Unlike the Ribble, it’s offered with a choice of riser bar, bullhorns, or drops. This creates a problem with reach. You grip bullhorns or drops several centimetres in front of the stem clamp, whereas you grip a flat or riser bar level with the stem clamp. Thus drop bar bikes have shorter top tubes – except here. One size doesn’t fit all. The reach of the Medium, which would have been fine for me with a riser bar, was too long for drops. That’s why I tilted the bar back: to put the brake hoods in easier reach.

A happy side effect of that long frame is a lack of toe overlap, even with a 74º head angle and 170mm cranks. I’d expect my toes to just miss a mudguard. Mid-drop brakes provide clearance for mudguards, for which there are frame mounts too – except behind the bottom bracket. There’s no chainstay bridge so you’ll have to do some cable-tie DIY. 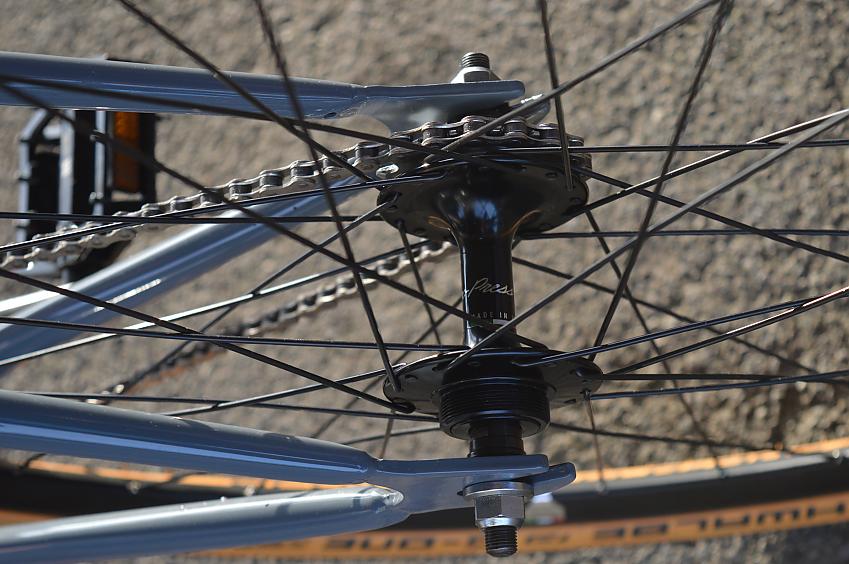 The Mango’s left-hand rear dropout was splayed outward slightly, so it wasn't perpendicular to the axle or flush with the locknut. Horizontal dropouts mask the problem; you can still set the rear wheel running true. It’s poor, however, and I would send such a bike back under warranty. Thankfully, Mango’s returns policy seems good.

A fixie will not permit freewheeling and will kick you off the saddle or even off the bike if you try.

The gear ratios are too high on both bikes, unless you live somewhere pan flat and pedal slowly. I don’t. A gear inch ratio somewhere in the sixties would be better, not only for hills but junctions. Accelerating from a dead stop is grim on a big gear.

Both bikes have flipflop rear hubs, so you can run a fixed sprocket and lockring on one side and a freewheel on the other. The Mango came with both, the fixed sprocket two teeth smaller. A two-tooth difference doesn’t normally mean changing the chain length when you flip the feel but I had to remove a link to tension the chain when switching to fixed – at which point the chain was too short for the freewheel. I blame the chain tugs and would fit different ones. 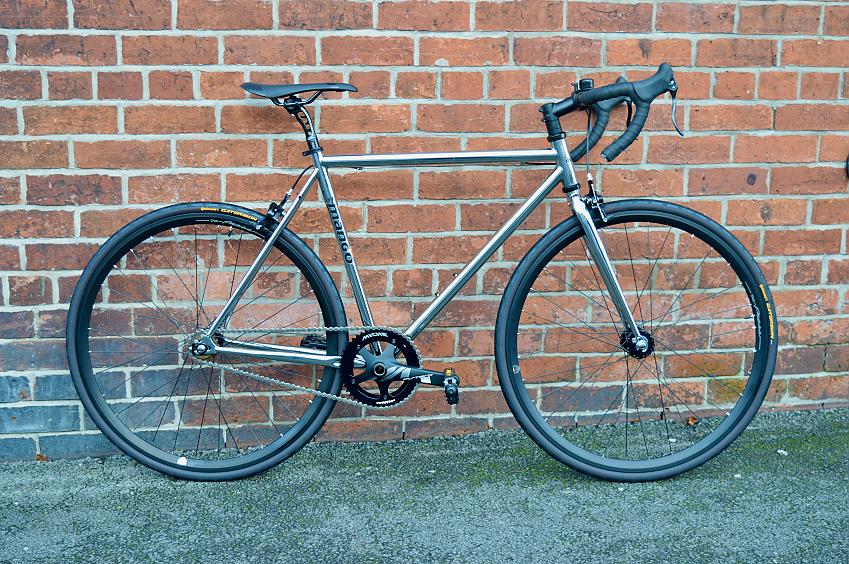 First look: Mid-drop brakes and mudguard mounts on the Mango win points for practicality but the shiny frame is not without flaws. Rack and mudguard eyelets. Chain tugs make it simpler to tension the chain and align the rear wheel

The same decent quality Miche X-Press track wheels are fitted to both bikes. These have 32 spokes apiece, which is better for durability around town than race wheels with fewer spokes. At 15mm wide, the rims are a bit narrow for the 40mm tyres of the Ribble, where I’d want 17 or 19mm to eliminate cornering squirm. They’re spot on for the Mango's 28mm tyres.

Both bikes are designed around brakes with a sensibly practical reach. Longer arm callipers will flex a little more than short-reach ones but I can’t say I noticed, and the trade off for bigger (than 25mm) tyres plus mudguard clearance is well worth it. Mango and Ribble each offer a few different build options for their bikes – different tyres, saddles, etc. 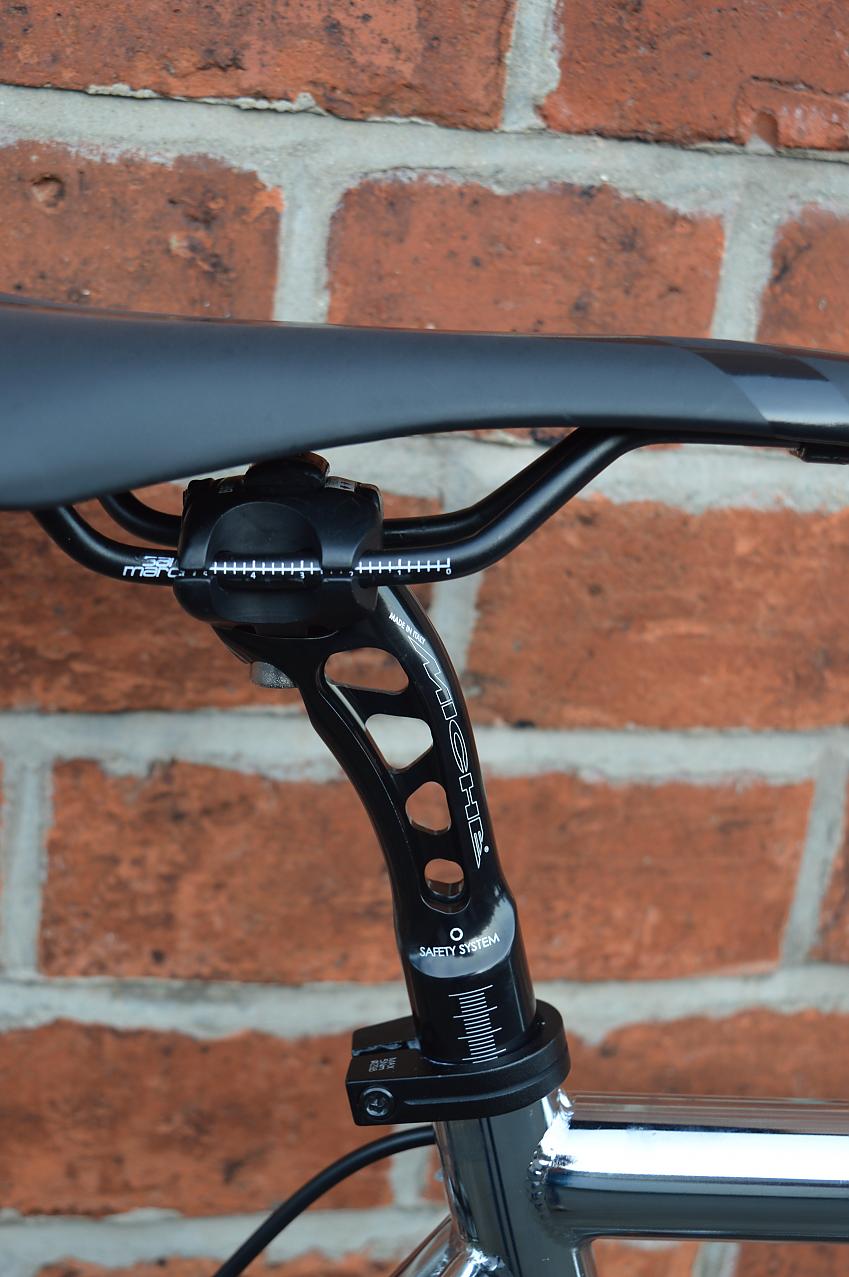 So long as you’re comfortable pedalling at very different cadences and don’t want to carry much luggage, a fixie makes a satisfying town bike. You find yourself focusing more on what lies ahead in order to keep rolling easily. There’s little to go wrong mechanically, and it’s cheap to fix when it does.

There is a learning curve. A fixie will not permit freewheeling and will kick you off the saddle or even off the bike if you try. You may want some form of foot retention for the inevitable high cadences; I use SPDs on my TT bike. Big flat pedals with studs work well enough around town. If your feet come off, a touch of the brake(s) will slow crank rotation enough to put them back. 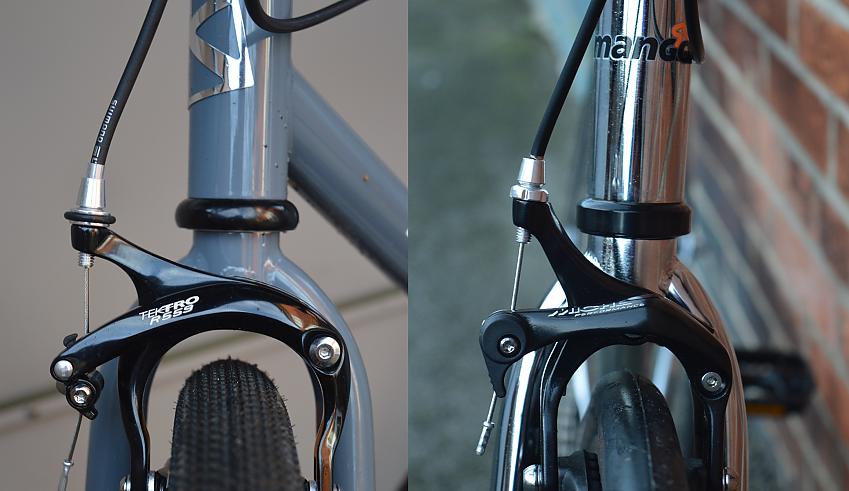 Aside from its massive gear, I enjoyed riding the Ribble. The 40mm tyres are great. You can’t unweight a fixie like a bike with a freewheel, so bad roads can be punishing. On the Urban 725s, you can just plough ahead unconcerned. The Schwalbe G-One tyres roll okay on tarmac and are not so heavy that they’re hard to spin up to speed. Yet I’d prefer slicks in the same width. You’re not taking a bike with an 83in fixed gear off-road – not more than once, anyway. I’d fit Ergon GP2 grips for hand comfort on the riser bar, and to make it easier to honk the bike uphill.

The Mango’s distinctive feature is, with a drop bar, an overlong reach. To address this, specify a riser bar or choose a smaller frame size than usual. Steering is light as a consequence of its steep head angle and relatively long fork offset. Nippy, yes, but I found the constant small steering corrections tiresome.

With its nice chrome finish, the Mango Level2 is a stylish urban fixie. It incorporates sensible design decisions too: it’s built for mid-drop brakes and mudguards. Frame geometry best suits a flat or riser bar, which will provide a more comfortable reach and a tighter reign on the skittish steering. Hopefully the dropout issue is a one-off.

The Ribble Urban 725s is the better bike in many ways. Long-drop brakes and big tyres are an inspired choice for an urban fixie. The gear ratio is gruelling; it needs a 42t chainring not a 48. It’s handicapped as transport by its lack of frame fittings. Hidden mudguard mounts would have made it practical without offending the fashionistas who view frame bosses as carbuncles. 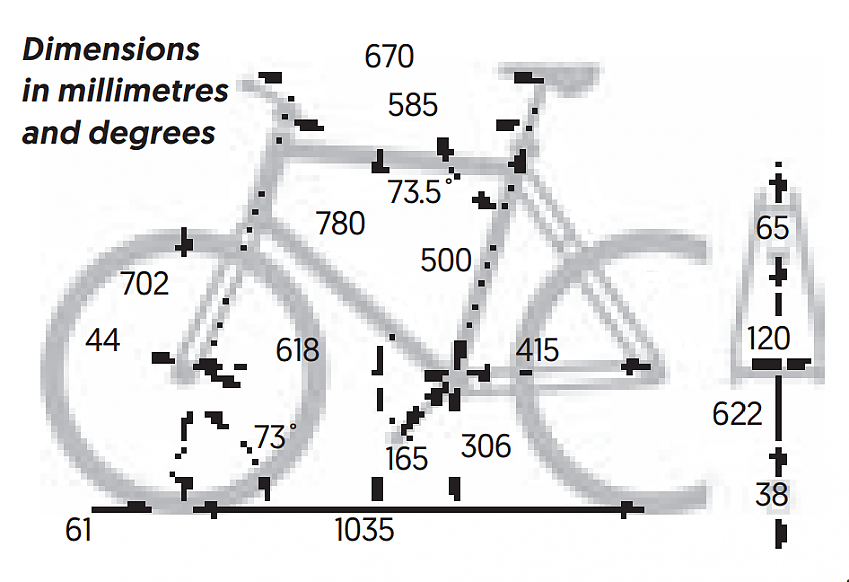 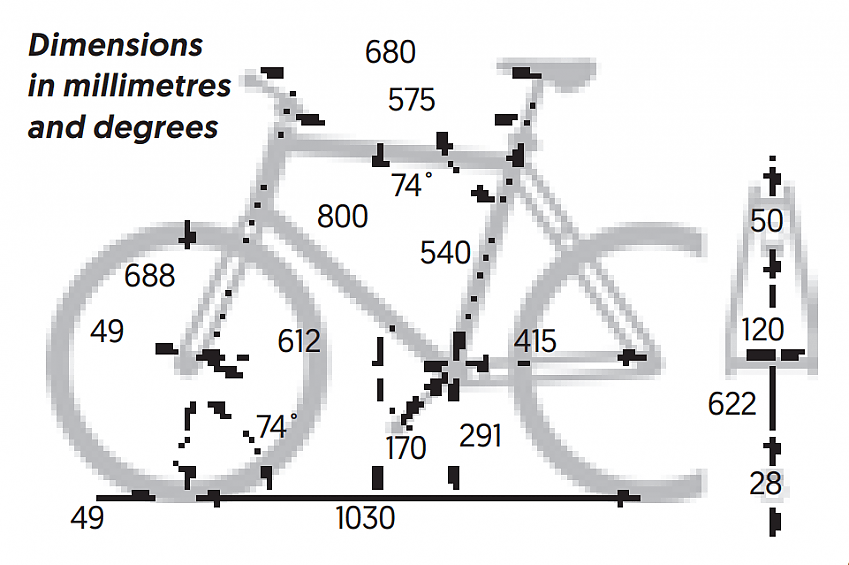 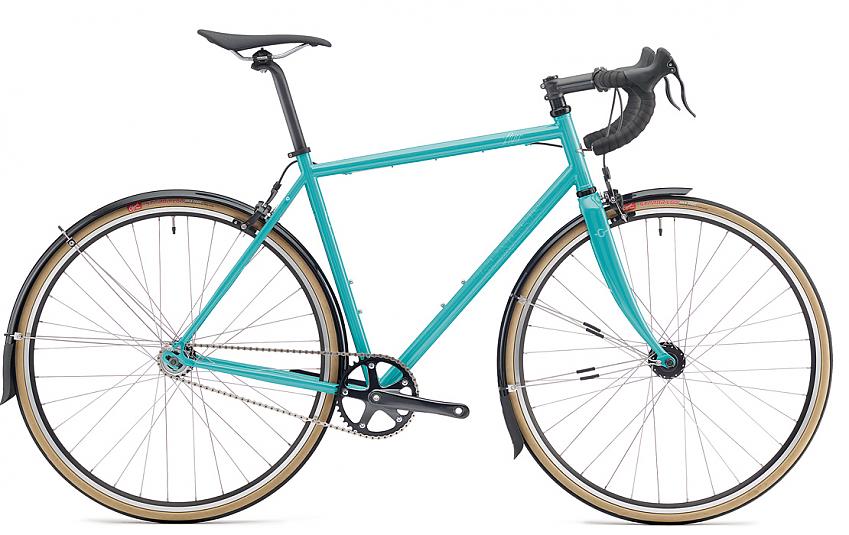 A benchmark fixie, the Flyer has a chrome-moly frame with forward facing dropouts, a carbon fork, mudguards, 28mm tyres, and a 65in gear ratio. 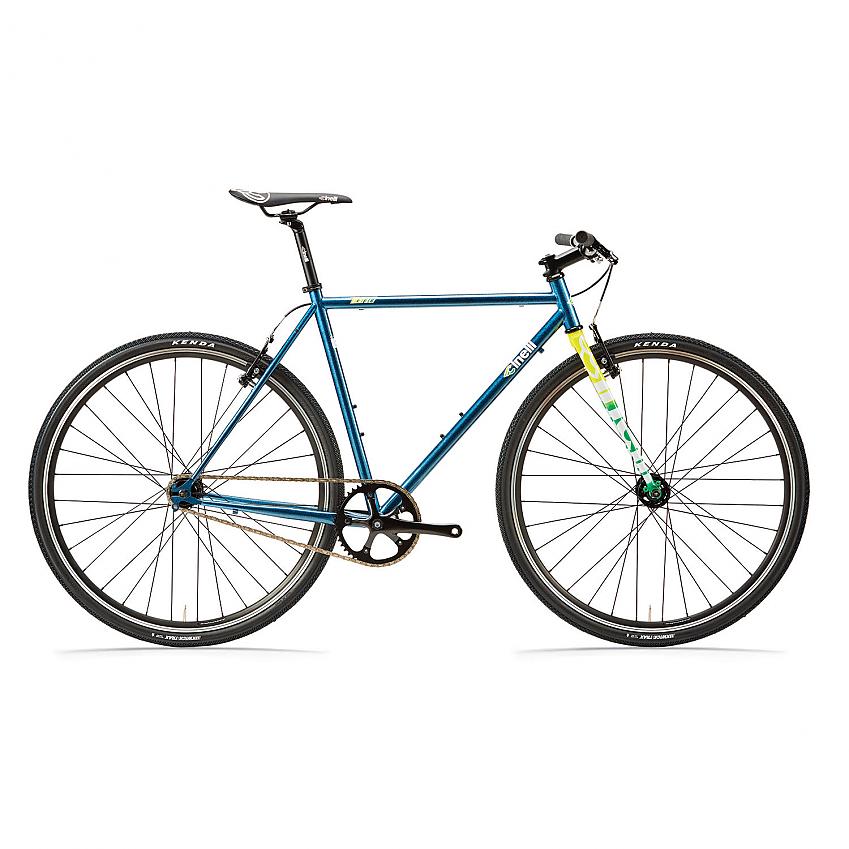 A steel singlespeed that takes tyres up to 45mm, a rack, mudguards – and gears, as it has 130mm dropouts and a hanger.

Feature: Which bike should I buy? View