While it’s sold as a complete bike, you’ll need to add your own rear rack and ’guards Above: Apex performance? Certainly very good!
By Guy Kesteven
Monday, 18 May 2020

The G2 is a cost-conscious, aluminium-framed allrounder from the same stable as the titanium Tripster. Guy Kesteven tested it for us.

The titanium Tripster ATR from Kinesis has been a do-anything classic for several years now. It was recently joined by a more affordable, adventure-focused alloy framed sibling, the Tripster AT. Both these bikes are normally sold as frames. The new G2 is available only as a complete bike to keep the cost as keen as possible.

It’s £300 cheaper than an equivalent spec AT, so what’s been changed or cut? Firstly, the frame is made from double-butted 6061 rather than more extensively hydroformed ‘Kinesium’ frame of the AT.

In construction/spec terms, compared to the AT, there’s only one colour choice (not three) and you lose the under down tube bottle cage mount, leaving you with two. You still get neat internal cable routing through the down tube for the rear brake and gears (including a spare hole and cable stop for a front mech if you decide to double up).

The full carbon fork has internal brake hose routing, and both ends of the bike are bang up to date with Flat Mount disc fixtures and bolt-through 12mm axles. There are mudguard mounts front and rear and rack mounts on the rear. The back brake is ‘inboard’ chainstay-mounted to keep it clear of the rack, so long descents aren’t going to singe your luggage.

This isn’t just a simplified version of the Tripster bikes, however; the G2 is a subtly different machine in a couple of key ways. As it’s designed to bridge between the sturdy, steady handling adventure bikes and the more lively road bikes in the Kinesis range, the G2 uses a half degree steeper 71 degree head tube angle. Tyre clearance is limited to 40mm on the rear (38mm with a full guard) rather than 45mm on the Tripsters. It won’t take fatter 650B tyres either.

The clearance compromise allows a 5mm shorter chainstay, while reach is increased and stack height reduced fractionally to give a slightly lower, more stretched ‘road friendly’ position. This is part of the new ‘Kinesis Rider Fit Design’ plan that’s referenced against their long sales experience to fit a full range of riders with just four frame sizes. The smallest frame size also gets a more sloping top tube to keep proportions correct and give enough seatpost extension for some flex ‘suspension’.

Crank length, stem length, and bar width are all size proportionate too, with relatively short (80-100mm) stems keeping handling alive despite the relaxed head angle. Even with its slightly extended top tube reach, the compact bars and short stem can make the G2 feel a little cramped, so size up if you prefer a bit of stretch. 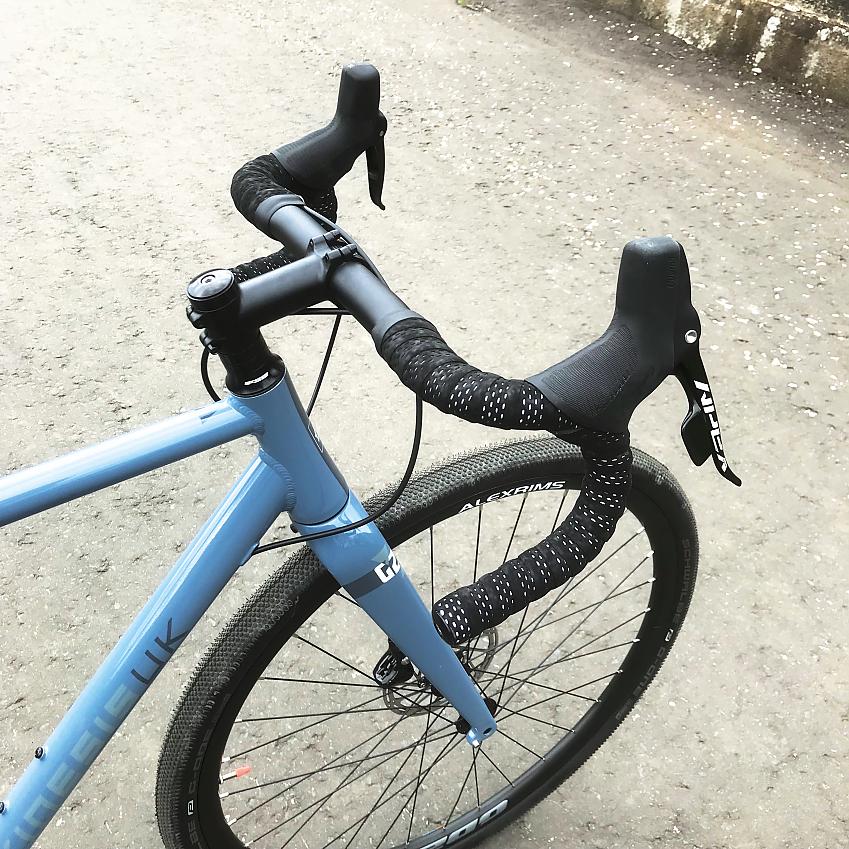 These subtle differences are enough to create a bike that comfortably rides alongside the Tripster rather than in its shadow. ‘Comfortably’ is possibly the wrong word: both bikes are on the firm side of sturdy in terms of ride character. It’s to the credit of the G2 that, even with innertubed tyres, it still rides more smoothly than my memory of the AT.

That’s most noticeable in the fork: it filters out rougher surfaces better than the bike’s back end, which sometimes delivers blunt thumps through the saddle.The payback for the occasional wallops is a very keen and accurate handling feel from the shorter stem and short-reach bar, which makes it easier to dodge the biggest holes.

There’s still ample self-correcting stability in the head angle to let it run through the rough stuff, and the baseline handling doesn’t get twitchy if top-loaded with a big seatpack and bar roll. The flared bar also gives extra control width in the (not actually very dropped) drops. It’s good to see Kinesis haven’t skimped on the quality of the bar tape either, which is a horribly obvious costcutting mistake on a lot of complete bikes. 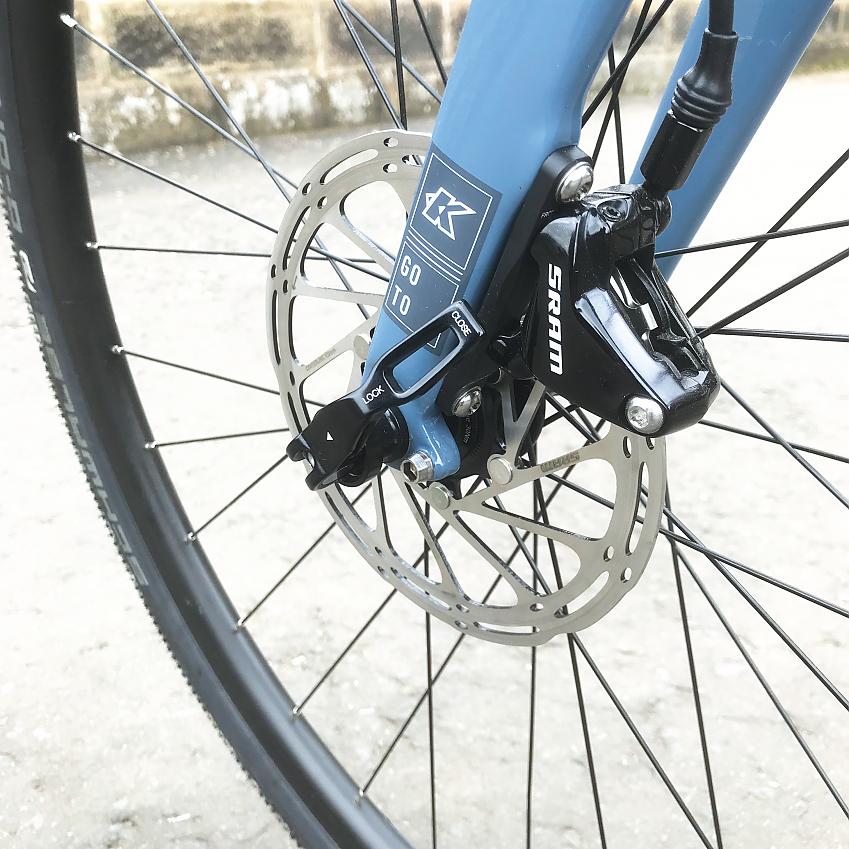 Wide range one-by The only obvious compromise is that the Schwalbe ‘Performance’ tyres aren’t tubeless compatible, although the Alex rims are.

The wheelset and ten kilo overall weight mean it takes a while to spool up to speed. Once you’re on top of the gear, speed is easily sustained in a ‘determined diesel’ manner even on tempo climbs. There’s no sense of your power being diluted or diverted by frame flex if you decide to muscle a gear over a brow or go hard off the traffic lights to defend your road space when commuting.

The tall ‘forehead’ of the SRAM Apex hoods also give a welcomely secure hand position if you accidentally or unavoidably clobber a big pothole or have to emergency brake. They hold the hydraulic fluid for the SRAM Apex brakes, although you’re unlikely to need to know where that is for a very long time as they’re a super-reliable set of anchors. 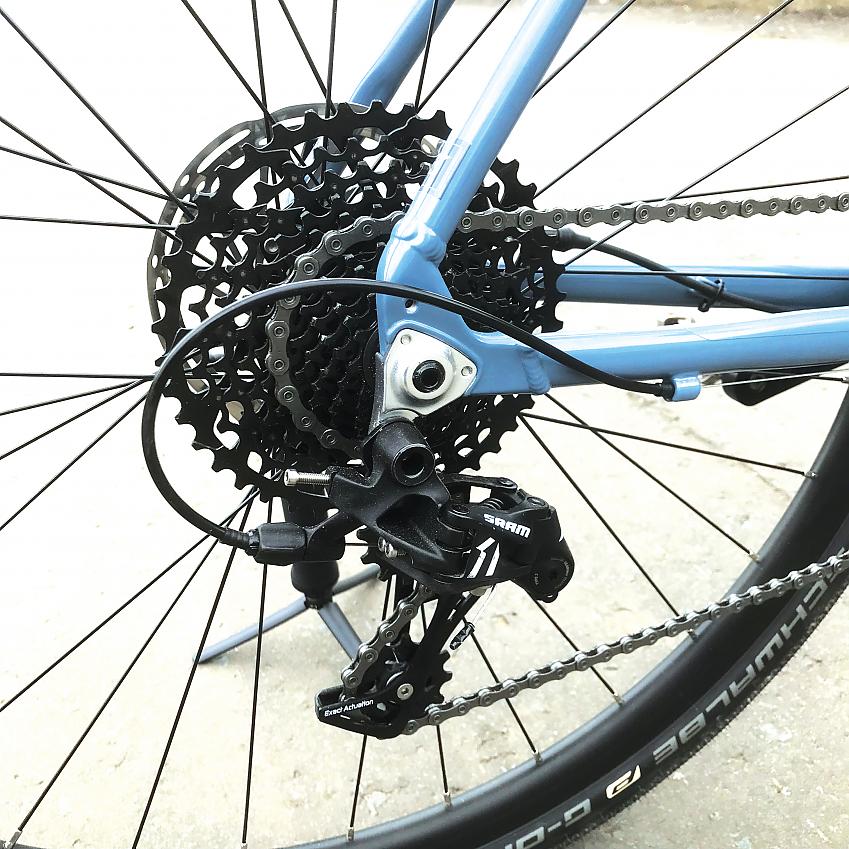 An 11-42 cassette gives a good spread of gears

The Apex 1 shifting is predictable and positive once you’ve got used to the ‘double tap’ actuation. An 11-42 cassette gives a broad range of sequential gears too and, while the lockring-equipped 1130 block is significantly heavier than the 10-42T 1150 version, it fits a standard Shimano freehub rather than an MTBstyle SRAM XD driver. So replacement is likely to be easier if you’re in the back of beyond.

Overall the G2 is decent value compared to its shop-bought, small-brand peers. While it’s not the most lavishly fixture-rich frame or the smoothest ride available, it’s a solid, well balanced workhorse that’s happy to roll  up its sleeves when things get tough without trading in too much tarmac speed to make daily commuting or big days out a chore. 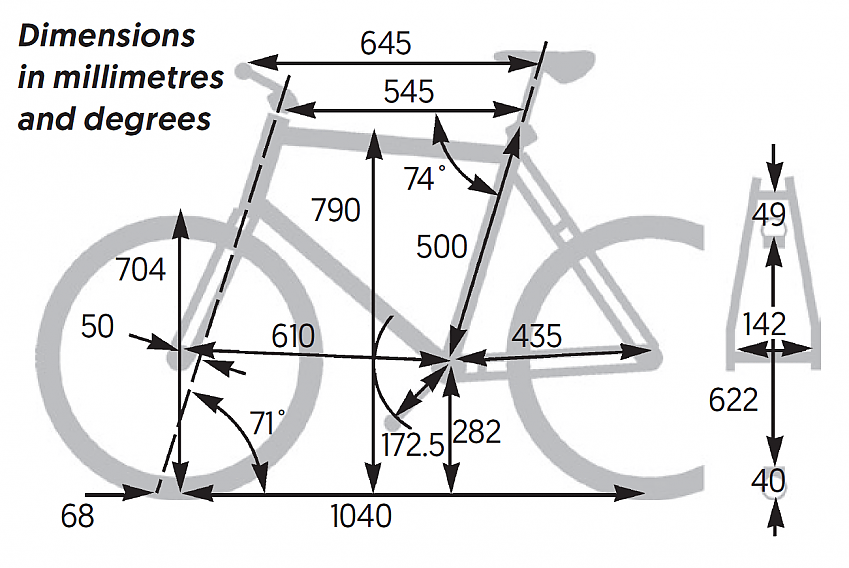 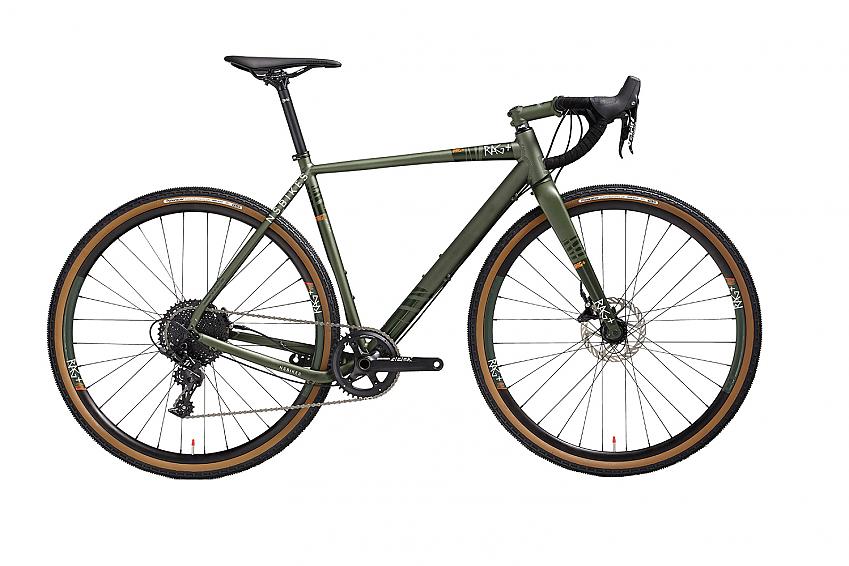 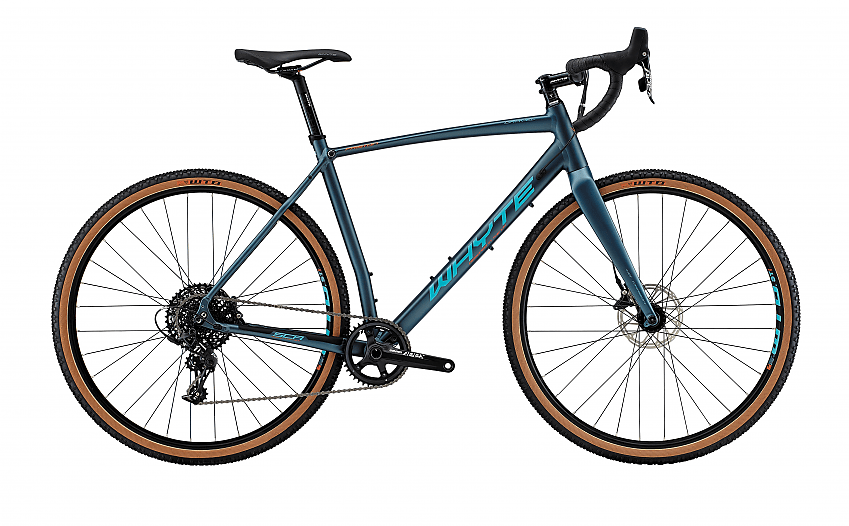