The ultimate do-everything bike is a chimera because we’ve all got our own definitions of ‘everything’, but if your budget stretches beyond the breathtaking figure of £5k you should, at least, be able to acquire an all-rounder that’s very nice indeed.

Isen Workshop produces hand built steel bikes in three off-the-peg models (All Season, Mountain GOAT, and Race Ready Road), all with numerous à la carte options. The All Season is “a bicycle for adventure and adrenaline that goes  beyond the road”. I tested a prototype with some upgrades.

Vielo was founded in 2017 by Ian Hughes and son Trevor, who previously worked with Scott and Storck. Their bikes, the V+1 gravel and R+1 road, are lightweight carbon fibre builds based around 1× drivetrains and wider-than-usual tyres. The V+1 is “engineered for riding on rough British roads plus off-road gravel tracks”.

Underneath its eye-catching paintwork, the Isen All Season is a neatly assembled collection of quality steel tubing. The test bike also has an ENVE carbon seat tube bonded into steel lugs, a framebuilder’s flourish that costs an extra £449 over a steel tube. While there will be a small weight saving, compliance differences are less than pea-sized – and I’m no princess.

To accommodate the fork’s tapered steerer, there’s a 44mm head tube with an external lower bearing. The test bike’s bottom bracket shell is chunkier too because (brace yourself) it’s a new standard: T47. Designed by Chris King
and Argonaut Cycles, T47 is a PressFit 30-sized shell with threads for screw-in cups. So it’s like a bigger version of a Hollowtech bottom bracket. 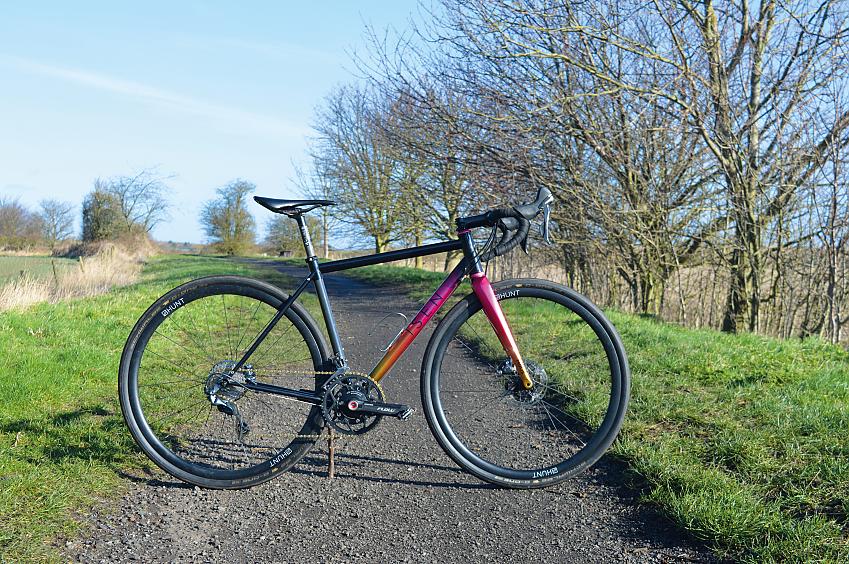 First look: The All Season is a good looking bike with a great wheelset, but it feels more road bike than gravel bike

Production All Season bikes have 135mm QR or 142mm thru-axle rear dropouts. The test bike’s were 132.5mm, which gives the option of running either 130mm or 135mm hubs.

This frame size of All Season is meant to accommodate 700×35C or 640×42B wheels/tyres. It doesn’t – or not with sufficient clearance. There’s scarcely more than millimetre between the seatstays and the tyre. This bike goes off-road! Isen did say that different seatstays and chainstays are now being used “for added clearance”.

The all-carbon fork is roomier. You could fit a mudguard – there are mounts – over the 35mm tyre. However, a mudguard would exacerbate what is already a serious issue on the All Season: toe overlap. The front centres distance (bottom bracket to front hub) is way too short.

This is the more expensive ‘UD’ version of the V+1, signifying that the frameset’s carbon lay-up is UniDirectional. The frame weighs a mere 880g (claimed), with the fork around 400g. That’s high-end racer light! Lose the dropper seatpost and you could easily assemble a sub-8kg V+1.

Like all Vielo’s bikes, the V+1 UD is 1× only; you can’t fit a front derailleur. Lack of an inner chainring gives room for the frame around the bottom bracket to be enormous. It’s a huge fist of carbon fibre, stiff enough, I imagine, to satisfy pedal-stompers much stronger or heavier than me. The down tube is 74mm across at its widest.

The bottom bracket itself is a BB86/PF86 PressFit. While the V+1’s frame tolerances are surely better than those of cheaper carbon bikes, I would nevertheless install a screw-together bottom bracket such as Hope’s Press-Fit PF41 here. 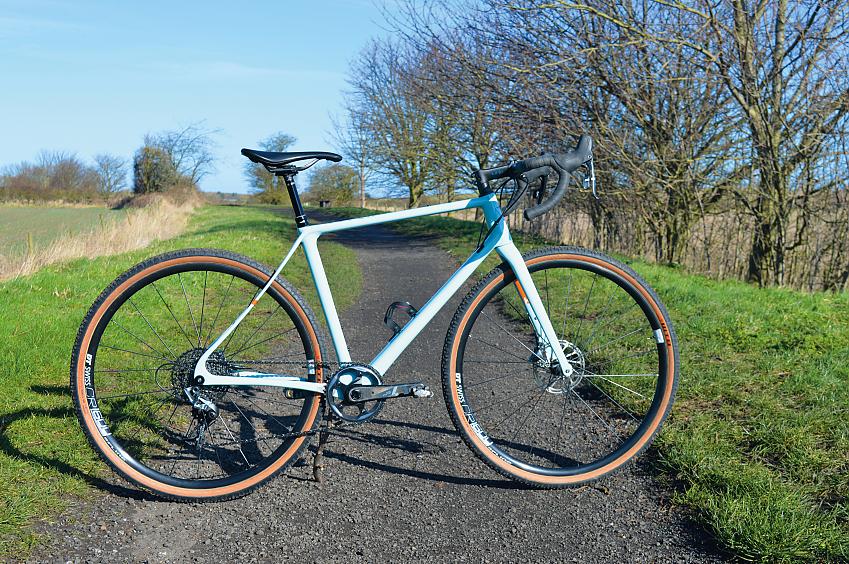 First look: A carbon-framed lightweight that's practical as well as performance oriented, it's good off-road and on

Tyre clearances are good in both frame and fork. You really can run 700×42C or 650×50B tyres. Vielo sent me some mudguards, which sat too close to the 42mm tyres supplied. I’d want smoother 38mm tyres with mudguards.

Gear cable and brake hose routing is internal. This makes the V+1 easy to clean but complicates maintenance. I had intended to swap the gorilla-sized 46cm handlebar for a narrower one but discovered that the cables and hoses ran through the bar too. Swapping the levers over was suddenly not trivial; I put up with the wider bar.

The geometry of the V+1 is more gravel bike than road bike. The wheelbase is longer – no toe overlap even with 175mm cranks – and the 71º head angle provides more trail.

Of the two bikes, the All Season has the better wheel package. Its Hunt 30 Carbon Gravel Disc wheels are a little lighter than the DT Swiss CR1600 wheels of the V+1 despite having four more spokes each. The weight saving is surely at the carbon (versus aluminium) rim. More importantly, the All Season wheels are shod with Schwalbe GOne Speed tyres, which are lightweight and fast rolling.

The result is a pair of wheels that feels easy to spin up to speed. In terms of gearing, the two bikes are quite different. The All Season has a road bike drivetrain: 50-34 double chainset, 11-32 cassette, and (largely wasted on me) silky-shifting 11-speed Dura-Ace derailleurs. By contrast, the V+1 has a gravel bike drivetrain: a SRAM 1×11 setup with a 42 chainring and a huge 10-42 cassette. 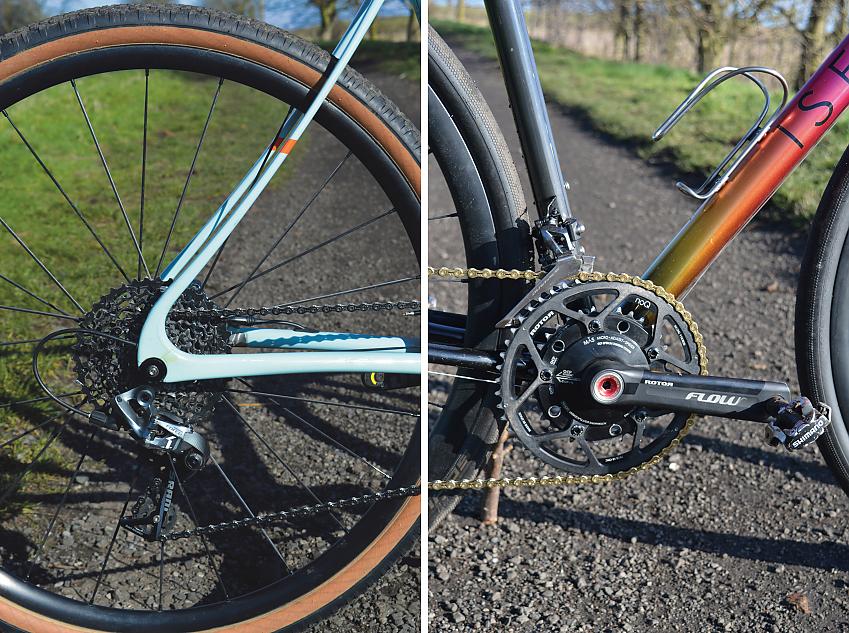 Although the steps between gears are smaller on the All Season, bottom gear is slightly lower on the V+1 and the 11 ratios it has are more evenly spread rather than being biased towards the top end. The V+1 came fitted with a RockShox Reverb dropper seatpost. It’s operated by the bike’s otherwise unused left hand shift lever; no mean feat, since the gear shifter is mechanical and the dropper hydraulic. There’s a converter device, exclusive to Vielo, underneath the bottom of the Reverb.

I didn’t use the Reverb much. A dropper post is indispensable on a mountain bike but I don’t ride dropbar bikes on such demanding terrain. On the other hand, a dropper does enable you to adopt a super aero tuck on descents, rather like pro cyclists perched on their top tubes, except you’re on the lowered saddle instead.

The All Season has a 27.2mm rigid post. I’d be happy with that except the seat tube isn’t 27.2mm and requires a shim. And, as it turned out, some carbon assembly paste. 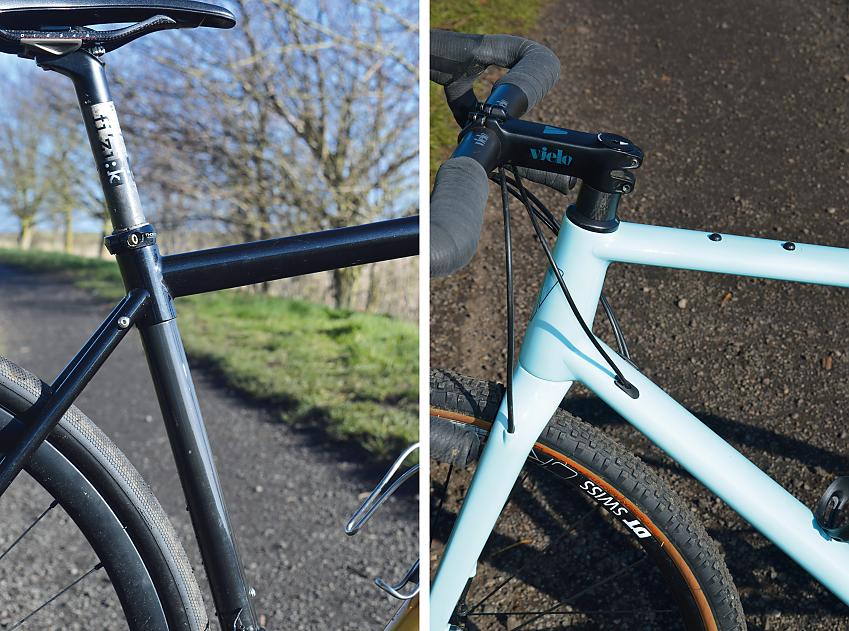 The All Season felt like a road bike to me, albeit one with bigger tyres. That was fine on tarmac, where it fairly flew along. With tyres 10mm wider and a good deal softer than those of a dedicated road bike, it purred over chipseal and instilled confidence on descents. Off-road its short wheelbase and steeper frame angles worked against it, compromising control and comfort and, as a result, speed. When riding slowly, I frequently hit my feet on the front wheel.

The V+1 was noticeably more stable off-road. No surprise: it has longer front centres, a longer wheelbase, and more trail. It was also significantly more comfortable. Partly that’s the larger air pocket in a 42mm tyre versus a 35mm. The geometry makes a difference too: a slacker head angle puts the front wheel further out front, and a longer wheelbase means you’re not sitting right on top of the wheels. It’s possible that there’s more give in the V+1’s carbon frame too.

Strava says I was about half a mile an hour faster on average on the V+1 than the All Season, largely due to the off-road section of my test loop.

These bikes aren't in my price range, but riding them made me wonder what I could build up in the same vein for around £1,500.

The Isen All Season is more road bike than gravel bike. Frame angles, wheelbase, clearances, gears…they all shout ‘road’ to me. With narrower tyres and mudguards, it could be a refined, do-it-all road bike for club rides, commuting, audax, lightweight touring, etc. Even then, I’d want more toe room.

The Vielo V+1 is a well-designed gravel bike for British conditions, with room for bigger tyres, mudguards and/or mud. There are some parts I’d change but the frameset is really good. With the right tyres, there’s not much in the realm of ‘sporty drop-bar cycling’ the V+1 won’t do. Chaingang? Sure. Dirty Reiver? Yep. Year-round club runs with the hard-riders? No problem. 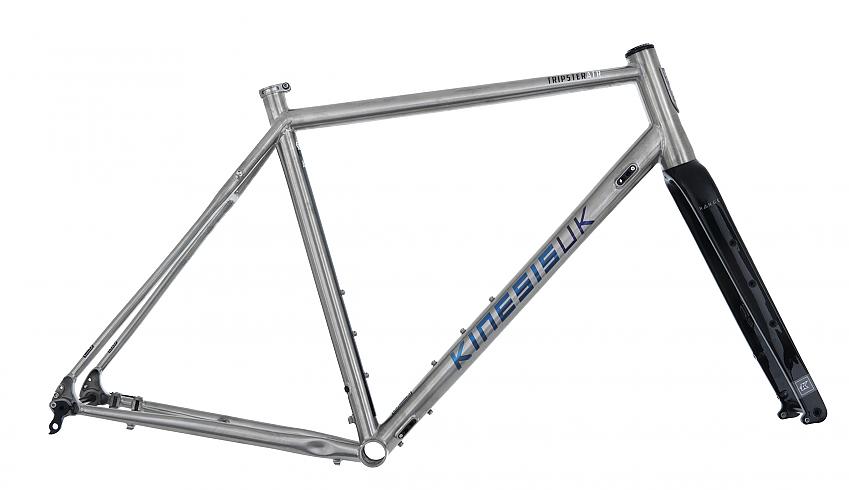 Titanium-framed, carbon-forked all-rounder with 68mm threaded bottom bracket and space for 700×45C or 650×50B tyres. 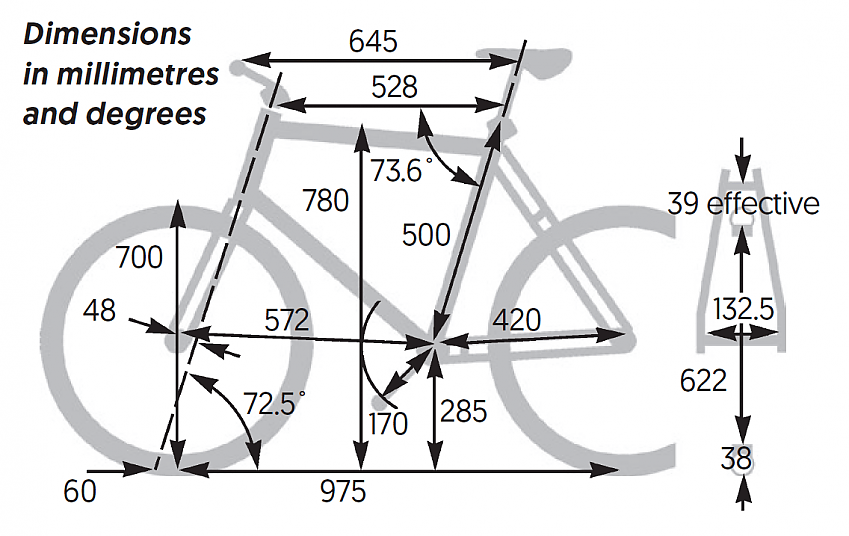 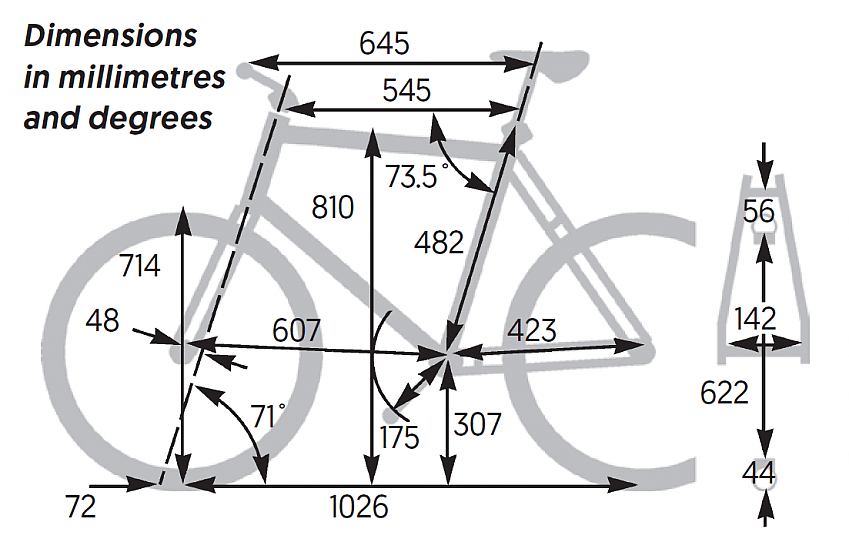