Pedals offer inclusive cycling sessions at Hinchingbrooke Country Park. The centre has a good range of adapted bikes to choose from, please take a look a CTCs guide to adapted cycles for more information.

Pedals is a CTC affiliated site, run by Huntingdonshire District Council. The Sport and Active Lifestyles team run sessions as part of the DASH project, a Sport England funded initiative that aims to get more people participating in sport and physical activity.

The country park has a wealth of wildlife everywhere which covers 170 acres, and includes open grasslands, meadows, woodlands and lakes. Whether you are riding a bike, walking the dog, exploring with your children, enjoying tea and home made cakes in the cafe or having a picnic, you are sure to enjoy this beautiful space.

This well adapted park has two routes for Pedals Scheme adaptive cycles and even has a specially designed and varied course for mountain bikers to use as well.

Originally it formed part of the large estate surrounding Hinchingbrooke House, which is mainly a Tudor style building with remnants of the early 13th century nunnery. The house and grounds were given by Henry 8th to the Cromwell family in 1538 at the time of the dissolution of the monasteries. Queen Elizabeth I came here, King James I visited and Oliver Cromwell played here as a child.

Activities available at the centre

Want to know more about who inclusive cycle centres cater for? Check out CTCs What is inclusive cycling? or contact us (see contact details above).

There is a charge for parking

Want to help? There are various ways in which you could volunteer: 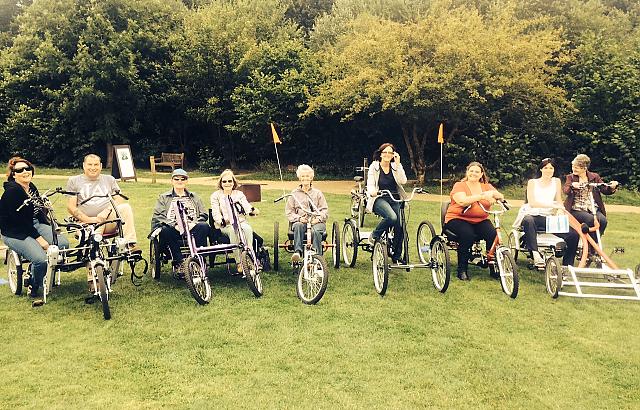 Alternatively please contact the Sports and Active Lifestyles Team on: 01480 387 098

For further details on the scheme call Hinchingbrooke Country Park on: 01480 388 666