Riding 100 miles can be tough but sometimes an inspiring event and raising money for a great cause can spur you on. Cycling UK's Chief Executive Paul Tuohy finally completed the full RideLondon 100 this week. He explains why doing a century was an important milestone in his recovery from a back injury.

Three years ago in July 2014, I had just started working for Cycling UK and was asked if I would do the RideLondon 100. I hadn’t covered a hundred miles in one effort for decades! As Chief Executive, I felt I needed to earn my spurs so agreed immediately and thought about getting some miles in. Cycling UK’s office in Guildford is just over 50 miles from home and my regular commute is the horrid M25 Kent to Surrey. On a bad day (and there are some) it can take more than two hours, so I was intrigued how long it would take to cycle in on ‘ride to work week’ and decided I’d give it a bash.

I’d have a good seven hours in between to recover at the office before the ride home into Kent, skirting the A25 with part of the ride back on the actual RideLondon route. It was one of those glorious summer days and by the time I was back at the lavender fields in Shoreham, near home, it was 8pm and I felt exhilarated to have done it.

Two weeks later, the day big arrived. I’d estimated my time at five hours, knowing full well that was impossible but I wanted an earlier start time and was rewarded with an off at 6.40am. The problem was the weather. A certain Hurricane Bertha had been decimating parts of the US and its tail end was due to hit the RideLondon route at…. 7am! The course directors decided to take out Box and Leith Hills for safety and the route as reduced to 86 miles. When told on the start line, there wasn’t a single complaint. We were in for a soaking! I’ve ridden a lot in rain, but this was something else. The weird thing was, it wasn’t cold. It was actually humid. Drawing on my long gone road race days, I just tucked into my very fast ‘wave’ of riders through the closed streets of London to hit 25 miles in 1hr 10 mins. When I was finally dropped, another group would soon be along and I’d hitch a ride there.

The problem was the weather. A certain Hurricane Bertha had been decimating parts of the US and its tail end was due to hit the RideLondon route.

Riding up The Mall 4 hrs 17 mins later, I was chuffed to bits. I unzipped my jacket to show my Cyclists' Touring Club heritage jersey and self-indulgently raised my arms and pretended I'd won Paris-Roubaix, such were the conditions! The next day, I had a call from a friend: "Paul, well done on your ride and what a picture!" I was confused. The person speaking to me had no idea I was supposed to be doing this event. "Oh thanks Colin, it was hard but sort of fun. Er what picture?"

“The one on the back of the Daily Telegraph!” came the excited reply. "A man on the train this morning was reading it with me opposite and I thought that’s Tuohy!"

I was three weeks in the job and had spent the whole ride posing for every camera I could find in the vain hope that I could capture some publicity for the charity that now employed me. This was jackpot!

Just nine months later, I lay in hospital for a month with a broken back and two rods screwed into my vertebrae to hold things together. They now remain there for life. I was knocked off my motorbike in London by a young lad turning left without due care.

Cycling returned as part of my recovery. With a smashed up foot, I was able to ride before I could walk or run and by July I was doing a mile — yes ONE mile — on my work Brompton around the block at home. My son Ewan rode RideLondon in the place that had been reserved for me, had a ball, but caused me embarrassment when people saw a time by Paul Tuohy well under five hours and were congratulating me on my recovery!

In reality, I was up to 20 miles in August with the issue being about how long it took on the bike for my neck to give up on me, such was the pain. But it was all going the right way with physio and swimming. In October, I managed the West Kent CTC rough stuff event and was gaining in confidence.

Work and life continued with an amazing wife and brilliant work colleagues who kept me busy and focused during 2016. By 2017, in cycling terms, I was still on a journey, so when marketing director Matt Mallinder said: "Fancy RideLondon this year, we could do with you on the team?" without thinking I said: "Of course!" There was also the unfinished business of not having actually done the full 100 miles in 2014.

A very late start at 8.40am put me in with people whose estimated times were around seven hours and what lovely people they were! The atmosphere was brilliant, much more so than I recall in the 6.40am ‘fast wave’ of 2014. As we rolled out, I immediately found myself on my own so just got on with it. Then I met James, from Liverpool. He wasn’t hanging about in his luminous lime green socks so I dropped into his wheel for a while before I got dropped. Then came a threesome of two girls and a guy in chaingang style. I made it a foursome and for 20 miles we were working well and enjoying the weather, the views and the sheer happiness of the riders.

I then got dropped again and marvelled in the joy of cycling on closed roads, albeit now at a very leisurely pace. The back and neck were holding up well as I passed into the ‘forbidden zone’ of more than three hours on the bike, then four, then at 90 miles I heard a yell: "Oi bruv!" It was my sister Allison and partner Darren in Raynes Park enjoying a Sunday summer drink outside a pub. They love watching the event each year, cheering on the charity riders and enjoying the spectacle. 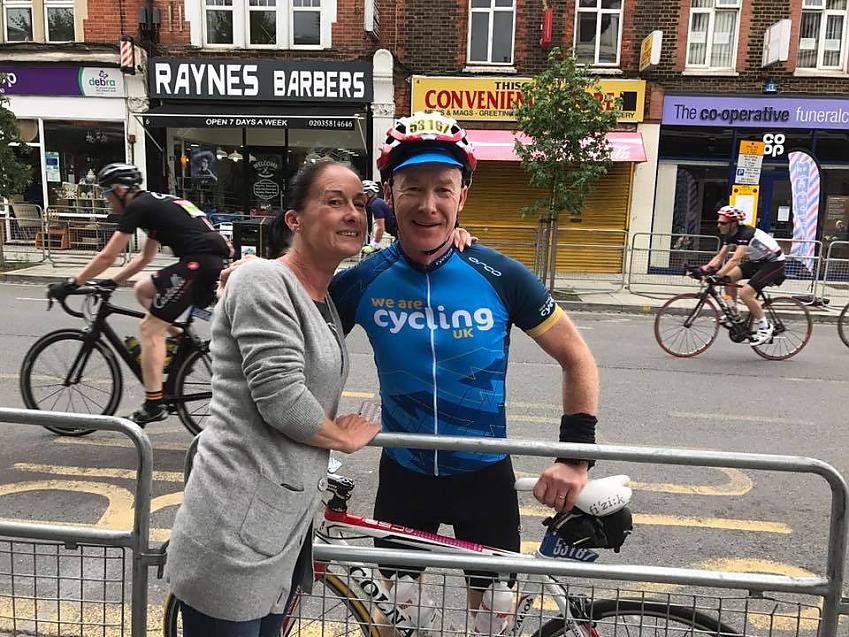 Above: Paul spots one of his biggest road-side fans - his sister Allison

I was on for a sub 5 hr 30 but stopped and waited to get across the myriad of Lycra and bikes swishing by. I made it and a half of shandy was offered (well it’s not a race you know and it would have been rude not to….). The shandy was sunk as my water bottles were empty and there were only 10 miles to go. We had a photo taken and then the sting in the tail that is Wimbledon Hill. Ouch! The last hill crested, it was downhill and flat back into town and the back was doing OK, but I wasn’t.

I was struggling to do 10mph. I’d blown but it didn’t matter. I got to The Mall, did my silly celebration finish to myself, and got my medal along with 25,000 other amazing people. I managed an average 18mph thanks to all those helpful riders! As the medal was hung round my neck, another volunteer put one on the chap next to me. With my head bowed, I could see his socks. It was ‘luminous James', he of the socks I’d last seen five hours before. We both stood up and spontaneously gave each other a hug and then without a word we were absorbed into the crowds of family and well-wishers. 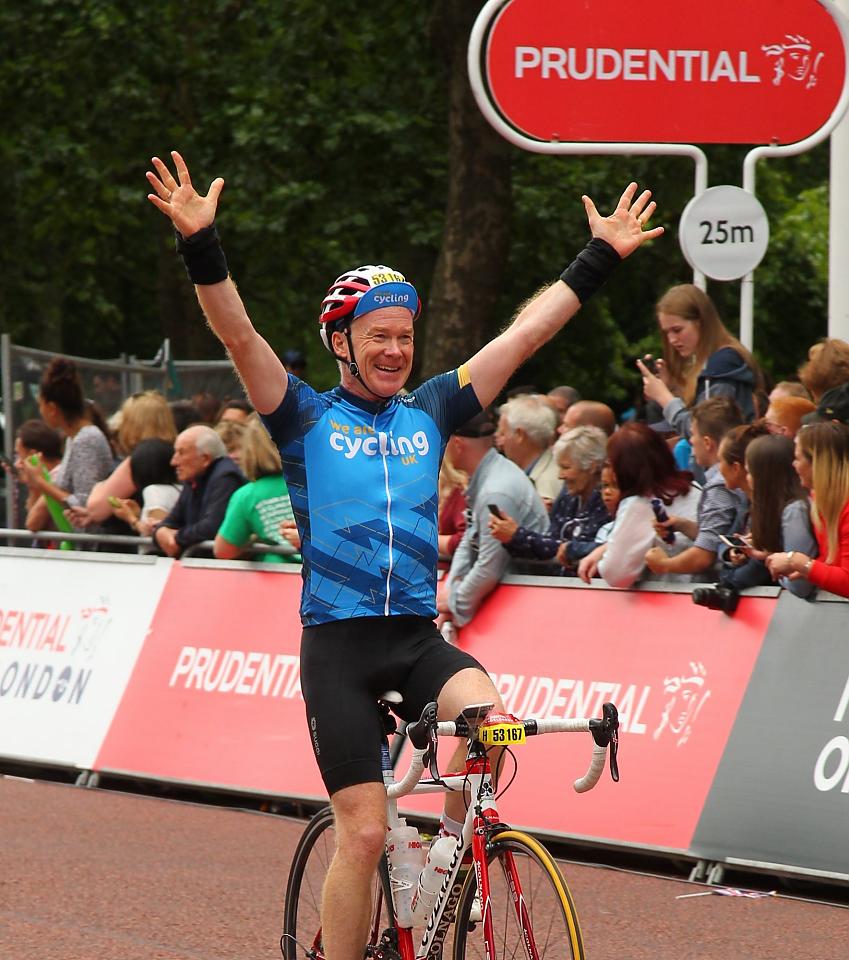 Paul was part of a team of Cycling UK cyclists, staff and members who completed RideLondon to raise vital funds for inclusive cycling projects. You can support them by texting TCUK17 £10 to 70070 to donate to Cycling UK or visit our JustGiving page.

Your support for our

Your support for our inclusive cycle work would be appreciated. Simple with a text. Many thanks and happy cycling !

I'm puzzled. Paul's name does not come up on the Ride London results page. And his ride number, 53167, belongs to a woman. Is this fake news or just a cock up??

You need to look at the 2017 event? The number matches Paul.

Fake news... ?? !!! Every mile was very real. I rode my butt off... She couldn't ride last minute and I wasn't planning to let the place go begging when asked to substitute with a week to go... Unpuzzled now or check with Donald..?