What would Britain look like if we reached Dutch levels of cycling?
By Chris Peck
Thursday, 23 January 2014

Yesterday (22nd January), CTC met with officials from the Department for Transport to discuss how the National Transport Model deals with cycling. Chris Peck explains why the model matters, and what CTC wants to see changed.

In November last year, CTC revealed that the Department's transport model forecast cycling levels would fall between 2015 and 2035.

At the time we questioned both why this was forecast, whether the forecast was accurate, and asked DfT officials for a meeting in order to discuss our concerns.

Our worries are that the model doesn't take into account the very recent changes in cycle use or the dramatic shifts in behaviour that can occur due to social and cultural factors.

At our meeting yesterday, we made some good progress, and we agreed to look at evidence of where cycle use has changed, what might be driving it, and how that could affect the model's parameters.

How does the model work?

The main components of the model - which runs to 2040 - are driven by changes to population (forecast to increase), gross domestic product and oil price. The model assumes that as we get richer and cars become more efficient, more and more of the trips we make will be car-borne - even at the expense of cycling. Access to cars is a major part of the model - even in 2012, half of households did not have access to a car, but that is down from 66% of households in 1997 (see graph at right). 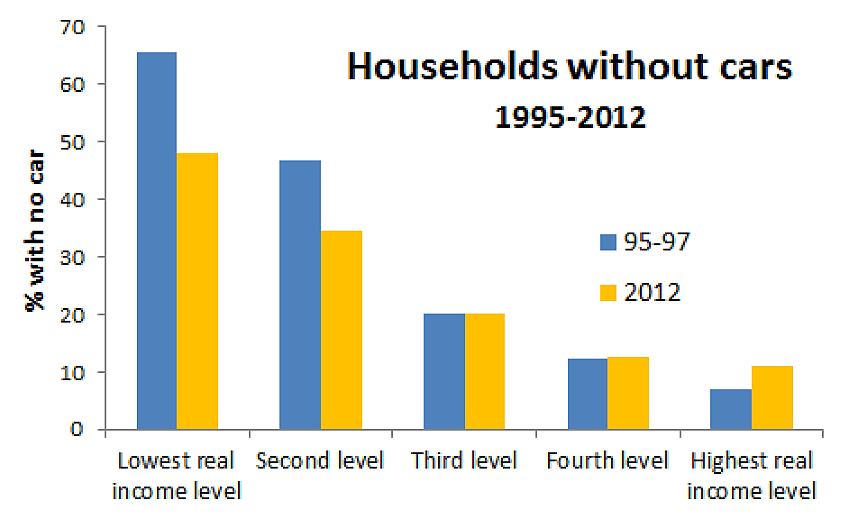 The richest 20% of the population travel over 8,000 miles by car each year; the poorest 20% travel just a third as much at only 2,716 miles in 2012. The NTM's output is based on the argument that future rises in income mean access to and use of cars will similarly inflate.

But what about the richest?

As the graph to the right shows, however, car ownership may have rapidly increased amongst the poorer parts of society, but it is barely unchanged amongst the middle income groups, while there has been a slight increase in the number of richest households living entirely without a car. It may be inaccurate, therefore, to assume that the car use and access will increase inexorably.

The richest are also cycling much more than any other group - with those with the highest incomes cycling 60% further than they did 5 years ago - over 80 miles per person per year, twice as far as the 40 miles per person per year amongst those with the lowest incomes. If we believe the model's parameters which say that we are all getting richer and therefore will drive more, we should also accept the evidence from recent years that shows that the richer we are, the further we cycle.

This is one of several points where we feel that the model is too simple to reflect accurately some of the rapid changes that are occurring in society.

Adjusting the model to fit expectations

In addition to forecasting what might happen to car use under a 'business as usual' scenario, the model also includes some assumptions about the effect of government policy: in essence, the economists running the model try to predict what effect various government policies will have in the future.

This gets problematic - and political - very quickly: for instance, we could assume that a future government will initiate a programme of restraining car use, raising fuel tax, levying road pricing, and handing priority and roadspace to public transport, walking and cycling. Under such a scenario, the forecast growth in car travel will be far lower than the current estimate, which suggests a 43% growth in motor traffic by 2035.

Presently, however, the Government takes the view that policy will stay more or less the same: we will do very little to reduce motor traffic, and the consequences will mean a gradual decline in sustainable travel.

This is a pretty pessimistic assumption given that the first round of cycling towns achieved a 27% increase in cycle use in three years and London has often seen annual double-digit growth in cycling. However, even the very slight positive effect of government policy is outweighed by the huge negative effects on cycle use forecast by the model thanks to the assumed fall in the cost of motoring.

In yesterday's meeting, officials agreed that an alternative model scenario, based on the policies articulated in a forthcoming Departmental cycling strategy, would be sensible. This is a helpful first step as it will help to establish what the impact of a large scale shift to cycling would be. It would also quantify the level of growth in cycling that the Department feels can be achieved through its policies.

CTC would still prefer to see what the effect would be if we were able to achieve the Get Britain Cycling targets of 10% of trips by 2025 and 25% of trips by 2050 - ambitious figures which CTC has asked the Department to endorse. The principal benefit (assuming that most of the trips will come from car or public transport) would be a huge benefit to health from being more active - an issue not covered by the model. But there would be other effects, such as reduced air pollution and carbon emissions, and less congestion and it is the concerns over the latter that is currently informing a vast road building plan for the next few decades.

CTC will continue to question the assumptions that lie behind the model, and present the evidence to officials to help refine the way it approaches cycling.

The evidence from the last ten years suggests that we are travelling less: spending 5% less time travelling and covering 6% fewer miles, but cycling 20% more. If that trajectory continued congestion problems would reduce, health would improve and there could be considerable savings to the economy.

The Department thinks that in the next 30 years that trajectory will reverse and we'll all be leaping in our cars to drive about on longer and longer trips because motor travel has become so cheap in fuel efficient cars. I'm not so sure: most people don't want to travel more than they have to, and certainly not by car. London is showing the way: there the growth in cycling is amongst the wealthiest, and people are opting for car-free lives where communication is by technology, public transport, bike and foot.

The danger remains that by following the current predictions of the National Transport Model, local authorities and politicians may be (erroneously) led to believe that a huge growth in driving is inevitable - and that cycling is going nowhere. This influences the way they distribute resources - building roads instead of cycle paths. We need to make sure that future iterations of the model acknowledge the potential growth in cycling that could occur if we had the policies and funding to achieve it. Only that way we will persuade the bean-counters of the potential benefits that a mass modal shift to cycling would bring.

Good to see this well-argued

Good to see this well-argued response. Models are only as good as the assumptions and data built into them. If business-as-usual results in predicting an outcome that is considered undesirable, then this is justification for a change in policy so that a more desirable outcome is predicted.

In this case the built-in assumption is that improvements in car efficiency will outpace the rise in fuel costs. This is easily altered by changing the fuel duty regime. There are limits to improvement in vehicle efficiency as a result of the laws of physics; there are no limits to taxation!

Reply to farnorth's post: You are absolutely right - who is to say that the fuel taxation regime will not radically change to maintain the relatively high costs of driving? This is a challenge which the Treasury faces: fuel taxation currently draws in £26bn which is enough to pay the Department for Transport bills twice over! (Though it doesn't even come close to covering the external cost of transport, which in England's urban areas alone costs around £50bn from congestion, air quality, crashes, emissions and lost physical activity).

If, as the Department's models suggests, fuel efficiency is such that consumption declines even as traffic grows, fuel revenue is forecast to massively decline, creating a sizeable hole in the tax take. This is why there has been such interest in road pricing as it is seen as the way of maintaining tax from motorised transport.

Challenging their assumptions and approaches is very important -vital- work.