Graph showing who the police think contributes to cycle fatalities
By Roger Geffen
Friday, 25 May 2012

London Mayor Boris Johnson has said he thinks 62% of cyclists who are killed or seriously injured are breaking the law. Police data show he is wildy wrong.

[UPDATE: Boris Johnson withdrew his original claim in a Mayoral response made on 19th September 2012. CTC welcomes his retraction].

"I've seen a figure, I think, of 62%, which is the high proportion of cycling KSIs that are associated with some infraction by the cyclists themselves of the rules of the road."

For a start, the Government doesn't collect data showing who was found to be breaking what laws when cyclists get injured - nor for any other types of road user, for that matter.

For another thing, his 62% figure is a long way out from other data sources which he might have got muddled up with.

The most likely source of his confusion is some data published in a report by the Transport Research Laboratory (TRL), showing who the police think contributed to collisions involving a cyclist and a motorised road user (driver or motorcyclist).  The report contains graphs without actual numbers or percentages, however CTC has obtained these subsequently from TRL.

What these figures show is that:

The full set of percentages is as follows: 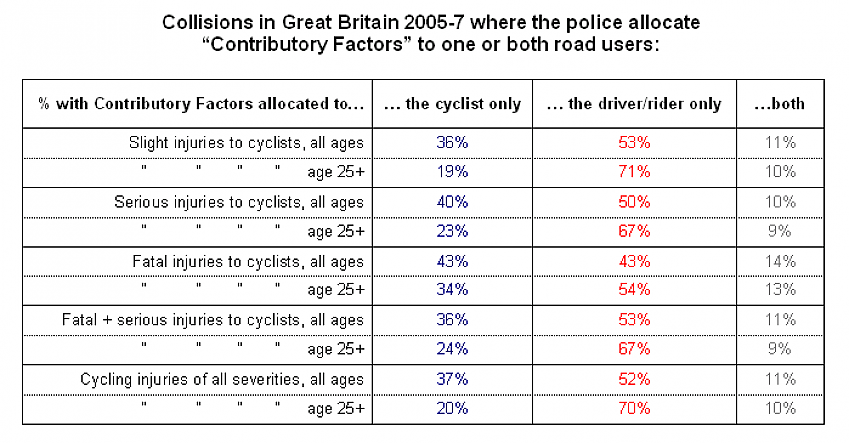 Of course, contributing to a collision does not mean you have necessarily breached the rules of the road.  Indeed these figures are only the impressions of the police officer making the initial report of the collision - they are not the results of any detailed investigation, let alone court action.

There is one other source which Boris might have got confused with is some London-specific data for 2007, 2008 and 2010 (they didn't analyse 2009 for some reason). It shows who was making what manoeuvres when cyclists were seriously or fatally injured.

Of all the cyclist KSI injuries for these 3 years, 5.3% involved red-light jumping or disobedience of a junction control by the cyclist, 15.1% by a driver or motorcyclist. A further 4.9% involved a cyclist riding off a pavement.  Other data shows, unsurprisingly, that this is an offence much more likely to be committed by children - so it isn't actually an offence at all if they are aged under 10.

However, this source suggests that the two predominant cyclist offences only account for around 10% of serious or fatal injuries in London.

So it is very hard to see where Boris gets his 62% figure from. I think we should be told.

CTC believes that all road users should respect the rules of the road and the safety of other road users. However, spouting nonsense 'statistics' merely stokes up antipathy towards cyclists from the irresponsible minority of drivers, and that has to be damaging to road safety. Politicians need to behave responsibly too.