Women can enjoy cycling but why do so few of them take it up?
By Julie Rand
Wednesday, 30 November 2016

After realising there was no mention of gender issues in the APPCG's 'Get Britain Cycling' report, the group decided to invite a selection of speakers, including Cycling UK's Hannah Chivers, along to a meeting to highlight some of the issues specific to encouraging more women to cycle and ways that some of the barriers are being overcome.

The event, which took place on Tuesday 29 November, brought together a range of speakers from the cycling world either involved in examining the issues around getting more women cycling such as poor infrastructure design, overcoming cultural and other barriers and working to promote cycling to different groups of women, or both. Parliamentarians present to hear and take part in the discussions included:

Around 30 women and a few men packed into the room on a bitterly cold November afternoon to listen to the short but powerful presentations.

First out of the starting gate was Dr Rachel Aldred, reader in Transport at the University of Westminster. Rachel outlined that there are many inequalities by age and gender in cycling populations in the UK compared with the Netherlands, where women actually have a higher mode share than men. She pointed out that women could actually derive more benefit from more cycling than men as they are more likely to make frequent but short journeys. However, the current environment for cycling in the UK is particularly off-putting to women as they generally prefer to cycle away from motorised traffic - and evidence from the Netherlands shows that good infrastructure does equal more women cycling.

Next came Hannah Chivers, Community Cycle Clubs Project Manager for Cycling UK. Hannah talked about how a tailored approach works very well in encouraging more women from Black, Asian and Minority Ethnic  (BME) communities to cycle. In the UK, 7% of white men and 4% of men from BME cycle, whilst 2% of white women and only 1% of BME women do. Since April 2016, 52% of people engaging with Cycling UK's community projects in England are female and of these, 16% are from a non-white background. Although there are some common factors, such as lack of equipment, skills, and or  confidence. It's important to work with the community to understand their specific needs and interests when encouraging cycling. For example, one group of Pakistani heritage women wanted access to bikes and training, while a similar group in a different area were more concerned about protecting their religious modesty.

Onna Bike from Bradford, one of Cycling UK’s Community Clubs

Following Hannah was Philippa Robb, lead cycle instructor at the Royal Borough of Kensington and Chelsea, who stressed that cycling enables women from BME backgrounds to 'get out of the house' and into the community. Her well-resourced programme, provided by her local council, has added 67 new names since September and of these, 50 now ride on the road. There are currently 3 social cycling groups catering to a wide range of women from all parts of the community, including the very wealthy. Many of those who start cycling with the project subsequently take it up independently and make local journeys by bike.

Helen Hiley, Senior Coaching and Education Officer at British Cycling, talked about #weride, an initiative to get 1 million more women involved with cycling by 2020, either instructing, leading or coaching. and therefore helping to govern the sport. Five years on, the Breeze programme has engaged with 87,000 female cyclists and there has been a 70/% increase in qualified female coaches, helped by mentoring training provided by Women Ahead. Ultimately, more women cycling means there will be more space for everyone, she concluded.

Emily Chappell, founder and director of Adventure Syndicate, described women who have achieved amazing things in the field of ultra-long distance endurance cycling events, surpassing men in many cases. She believes that if you challenge women's assumptions about what they can do, it will be a win-win for everyone. Some men also want new ways of riding, dressing and looking, as evidenced by them wanting to enter women's specific events, such as the Rapha 100!

Samantha McClary, Head of Content and Deputy Editor of Estates Gazette, helped to found pedElle, group of women in the property industry who take part in cycling events. Within the property world, cycling is the new golf and she realised that many women were missing out on valuable networking opportunities by not riding. By providing a safe and attractive environment for  women - 75% of participants were new to the sport - they could make use of cycling as a valuable business tool. 100% finished a ride of 300 miles in 3 days and enjoyed great emotional support, laughter and friendship - women make the best tools when it comes to supporting women to cycle.

Next came Sheridan Piggott of York Bike Belles, a volunteer-led community organisation which has welcomed 7,000 people, of whom 75% have increased the amount of cycling they do. They run activities to increase confidence and use social media to connect with women, building on the female love of communication and sharing. The groups are based on friendship and have a very relaxed feel to them, for example they organise fun activities that include cycling to encourage women to ride. A recent illuminated bike ride was an example of this and a great success. They also provide female-friendly bike maintenance workshops with women mechanics where possible, plus cheese and wine!. The formula that works best for rides is 2 hours at a steady pace including a cafe stop - and although the focus is on women, men are also welcome.

Katyja Leyendecker, PhD researcher in Architecture and Built Environment at Northumbria University entitled her talk 'Neither Do Men', pointing out that women actually commute more sustainably than men - combining more complex journeys such as shopping, education, and transporting children - so people, rather than gender, are the issue: urban design currently stops both genders from cycling in the UK, compared to countries such as the Netherlands. We need to engage with the 'interested but concerned' groups who would be interested in cycling but for the lack of segregated infrastructure to service their needs. 97% of people don't cycle so an inclusive and consistent design standard, with budget for cycleways from government is what is required. Grassroots campaigns are good but we need to look at the bigger picture. 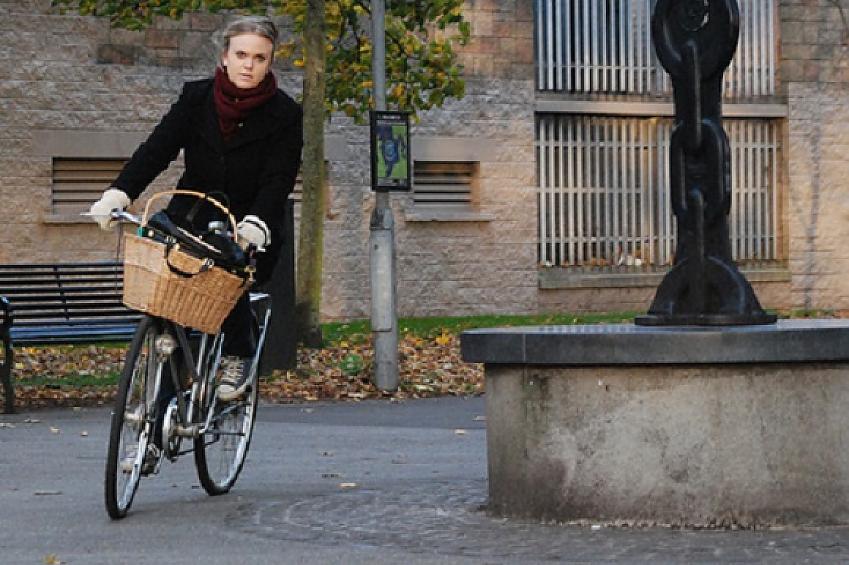 The only male speaker was Nigel Roberts, Managing Director of Trek Bikes UK. He spoke about making the retail sector accessible for women, who are currently underrepresented. In running, women are now serviced better but there is still much to be done in the field of cycling. Trek University, a training course for bike shop employees, has a module on how to make women feel more catered for in shops. The company also tracks which products are selling to which genders and encourage shops to employ more women and discover what they actually need. For example, some may want female-specific product but others may not. Trek has a wide range of women's bikes and encourages women to demo them. Products arranged together rather than spread around the shop also engages more with the way women tend to shop.

Finally, Claudia Corrigan, Principal Cycling Programme Officer at Transport for London, discussed the ways in which the organisation is trying to reach a target of 1.5million cycle trips every day in London: 76% of people have access to a bike.  In order to normalise the image of cycling, TfL has identified the following interventions:

A lively discussion followed the presentations and identified the need for follow-up activities and further work such as persuading the Government to fund proper Space for Cycling, enabling everybody to enjoy the benefits of riding a bike, whatever their age or gender.