Laura Moss organises the Cycle Touring Festival with her husband Tim, and thoughout her pregnancy she was regularly cycling. Laura explains the benefits of cycling during pregnancy and how she's been cycling longer distances while expecting a baby.

Brisk walking, gentle yoga and swimming. When I first found out I was pregnant, these were the exercises that were recommended by the various apps and websites I consulted. Most articles I found on cycling during pregnancy cautioned against cycling outside, with the NHS, NCT and Babycentre all recommending stationary bikes instead.

The occasional article (including Victoria Hazael's blog on this website) showed me that some women did keep riding throughout pregnancy, but authoritative sources recommending it were few and far between.

This panicked me. I rely on cycling to get around, and more importantly to maintain good mental health. I need to get outside on a bike, to keep stress levels down and keep both my mind and body strong. The Royal College of Psychiatrists recommends exercise as a key factor in maintaining mental wellbeing during pregnancy and I knew that this would be crucial for me.

I was particularly keen to know how far I could push myself. Could I still complete long days on the bike? Was it safe to get out of breath? Would I harm the baby if I cycled on bumpy tracks? I didn’t want to treat my pregnancy as a training opportunity, but it was important to me that I could continue riding for as long as I could.

I am a director of The Adventure Syndicate (TAS), a Cycling UK-affiliated group which aims to get more women and girls cycling. A few of us have fallen pregnant over the last couple of years and we all agree that cycling when pregnant is something of a taboo subject. We all experienced comments from people thinking we were mad, or worse, than we were putting our baby in danger by risking falling off and hurting the bump.

However, looked at objectively, how often do you fall off your bike, especially when riding tame trails or roads? We also all found that cycling when pregnant was often much easier than walking or running, which often causes pelvic pain.

The overall message was to listen to my body, keep hydrated and stop if anything didn’t feel quite right. [my midwife] didn’t see any problem with cycling and encouraged me to carry on right up until the due date.

Thankfully, my midwife was very supportive. Her advice was that I should continue with any exercise I had been doing before, for as long as I felt comfortable. Her primary concern was maintaining good physical and mental health and she suggested I continue for as long as I could. The overall message was to listen to my body, keep hydrated and stop if anything didn’t feel quite right. She didn’t see any problem with cycling and encouraged me to carry on right up until the due date.

Encouraged by this advice, I cycled throughout my pregnancy. I had no morning sickness and very little of the exhaustion that other women reported. I cycled to work through ice and snow, switching to my mountain bike and cycling slowly to reduce the chance of slips, and pedalled up and down the hills of the Yorkshire Dales where I live.

Although the official advice from the Chief Medical Officer is to avoid off-road cycling during pregnancy, this is more to do with the risk of falling off than anything else. Sticking to easy trails and walking down anything remotely technical actually felt safer than riding in traffic.

At five months’ pregnant, I therefore cycled off road across Scotland with some Adventure Syndicate friends. I only rode tracks that were well within my ability, and didn’t fall off once. In the spirit of collaboration and mutual support we encourage, two of the women I was with took it in turns to run back and carry my bike over the most difficult sections, leaving me to walk down in my own time. In fact, the main issue was the bumpy ride, which led some to comment that my amniotic fluid must be more frothy than a milkshake.

As the organiser of the Cycle Touring Festival, holidays by bike are a big part of my life. At seven months pregnant, my husband and I cycled 500 miles up the west coast of Denmark. We chose a flat country on purpose, as I was finding hills more difficult, and were attracted to Denmark because of the extensive network of traffic free cycle paths. We rode approximately 50 miles each day, camping every night, and the attitude of the people we met was very refreshing. One Danish woman commented that ‘of course’ you should cycle when pregnant, as it is so much easier to be supported on a saddle than walking.

Although I experienced some significant round ligament pain during this trip (characterised by sharp pains in my pelvis), I found that sitting more upright eased it off, as did stopping for a break for a couple of minutes. In later pregnancy, this stopped being an issue. 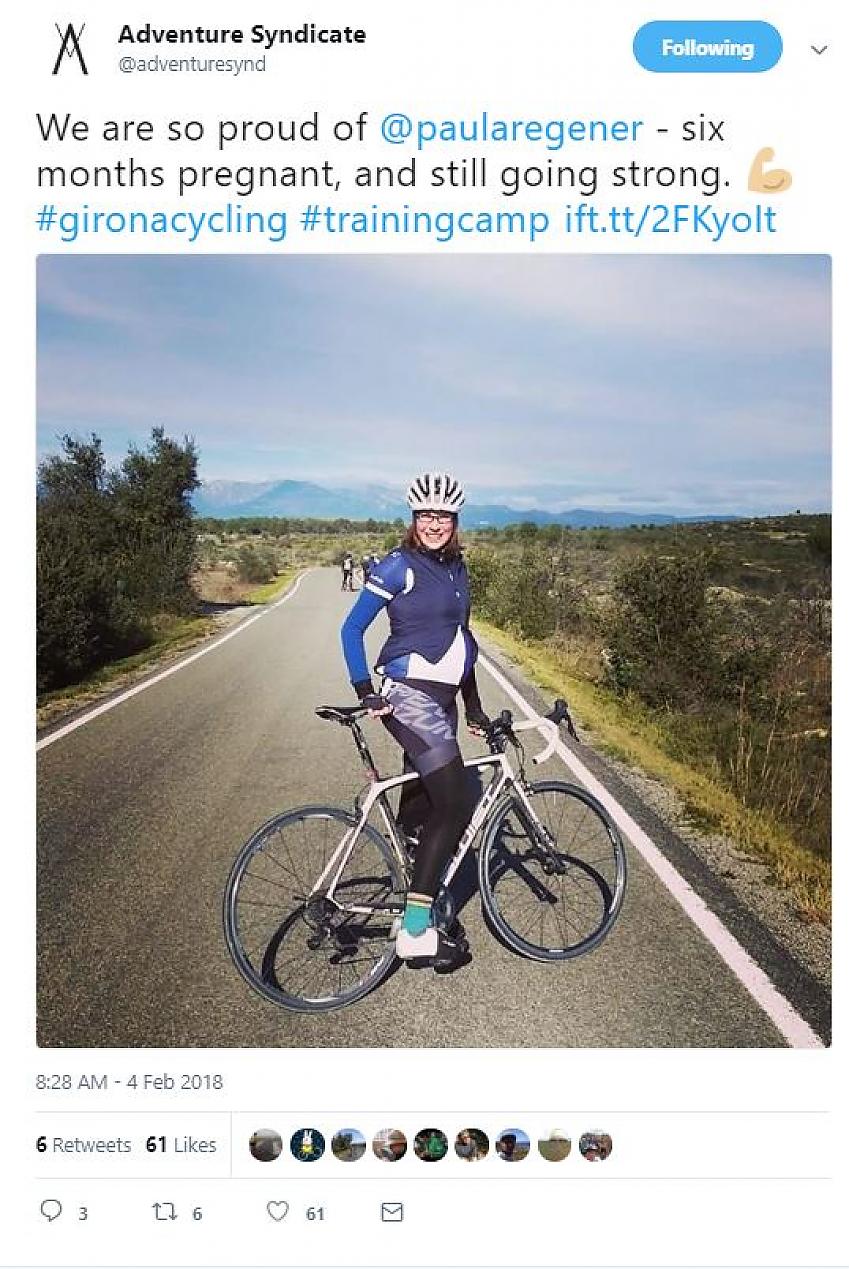 At 37 weeks (approximately eight months) pregnant, I spent three days cycling through Northumberland with a group of friends. My midwife gave me her blessing for this trip, advising that I pack my maternity notes in the panniers in case the baby arrived early. It was brilliant to feel that I could still take part in ‘normal’ activities, and once on the bike, I barely felt pregnant.

The other TAS riders I spoke to had similar experiences. One of our riders, Paula Regener, took part in a training camp in Girona when six months pregnant and the photograph we posted on Twitter of Paula had given me a lot of inspiration and motivation to carry on riding as pregnancy progressed. She commented that she made sure to assess the risks of each ride more carefully as pregnancy progressed, especially in wet or icy conditions.

Although both Paula and I found that reduced lung capacity, lower haemoglobin levels and increased weight affected our cycling performance (particularly speed and ability with which we could tackle hills), there is evidence that cycling when pregnant is akin to training at altitude. As well as maintaining cardiovascular fitness during pregnancy, this also means that post-partum fitness can be much better than before pregnancy, for those who remain active throughout.

The book Pregnancy to Podium: My journey challenging the myths about exercise with bump and beyond recommended by another TAS rider, Harriet Pike, demonstrates this principle. The author, Susie Mitchell, is a vet and bemoaned the fact that most advice about exercise during pregnancy is based on old wives’ tales and little hard evidence. She continued to ride throughout her two pregnancies, including a 50km ride on the due date for her first baby. She went on to win a National Medal in track cycling just six weeks after giving birth to her first child. 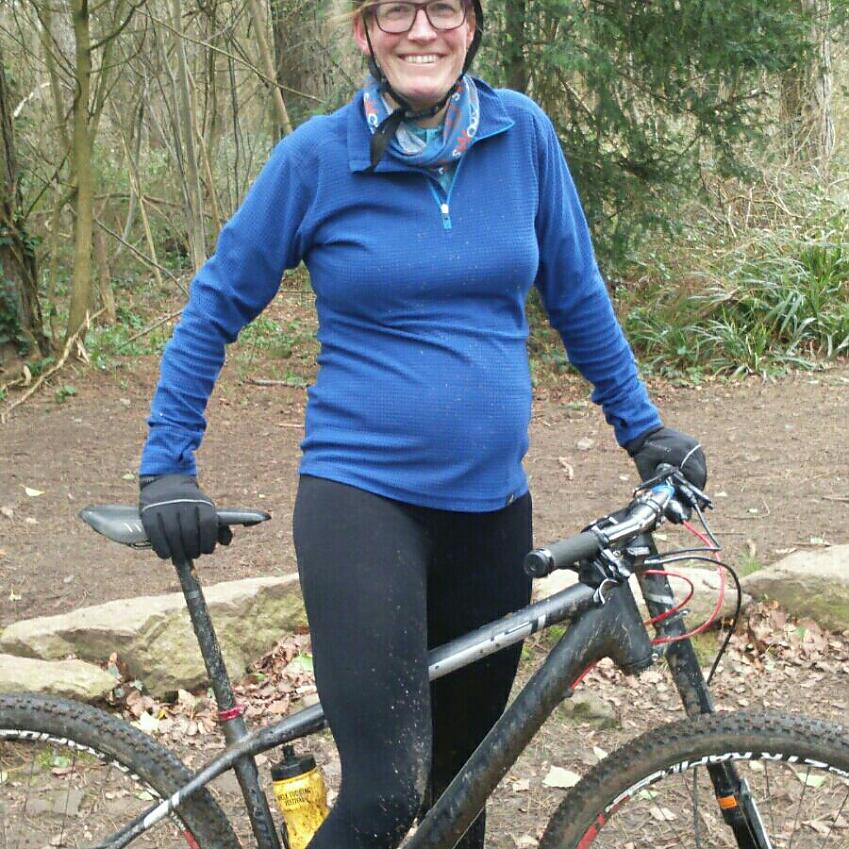 Ruth-Anna MacQueen, mother of three and a doctor specialising in obstetrics and gynaecology, supports this view that the benefits of cycling when pregnant outweigh the risks. Her advice is that cycling when pregnant can reduce the risk of gestational diabetes and blood pressure problems, with no evidence that it increases the risk of miscarriage or premature labour. She also recommends some practical steps you might take to make cycling more comfortable as pregnancy progresses, such as modifying your riding position.  As my bump grew, I fitted a stem with a steeper angle to give myself a more upright riding position, which vastly improved comfort.

Ultimately, it is a matter of personal choice. Not everyone will feel comfortable cycling on roads, or off-road, or even at all, when pregnant. However, if you want to, the benefits are numerous. I am sure that cycling has helped my gluteal muscles stay strong, giving my back the support it needs to cope with the extra weight from my tummy. I haven’t experienced the extreme exhaustion that other pregnant women complain of, and could forget about my cumbersome size when pedalling along.

Above all, regular cycling has helped to keep my sane, when so much else is changing in my life. I commuted by bike right up until my due date, and as a result I am far happier and healthier than I would have been if I had stayed off the bike. Along with my fellow TAS riders, we agree that it’s about time that more women were encouraged to continue cycling as part of a normal, active pregnancy. 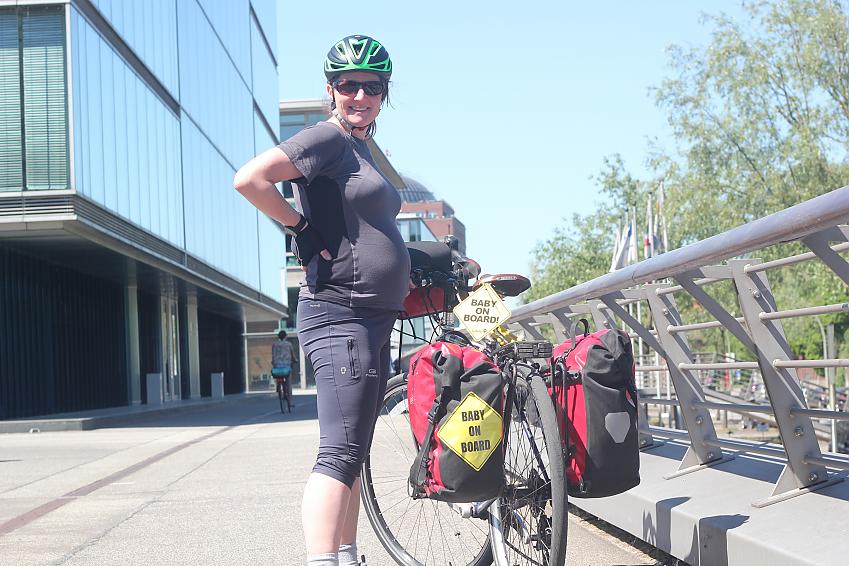 Cycling with a bump - is it safe to ride whilst pregnant? View

A guide to cargobikes View
Cycling UK continues to support the UK to cycle
This remains true during this difficult period with the ongoing threat of coronavirus Covid-19
Read our latest advice on cycling
Join Cycling UK to help us change lives and communities through cycling
Membership gives you peace of mind insurance, discounts in cycle shops, rides & routes
Join now