'Safety in numbers' - how it works at a micro level

'Safety in numbers' - how it works at a micro level

As near on 1,000 riders on the Magnificat sportive passed by at the weekend, I witnessed a great demonstration of safety in numbers - on a micro-level. The presence of those cyclists had a profound effect on driver behaviour.

The idea of  ‘safety in numbers’ has been explored in several academic papers, including studies of various European countries, American cities and areas of Belgium. These uncovered a link suggesting that in areas of high cycle use the risk of cycling was lower.

CTC has previously suggested that this may occur because interventions to improve cycle safety may also encourage more people to cycle (20 mph speed limits, lower motor traffic, good cycle facilities) and, crucially, that driver behaviour may change in the presence of larger numbers of cyclists. Essentially this boils down to two main functions at work: the presence of more cyclists makes things safer and when things are made safer, more cyclists appear.

My experience this weekend demonstrates (ok, not scientifically!) that both of these elements appear together - it's not just one or the other.

I was staying in a house in the countryside overlooking a narrow lane, just where it makes a sharp, blind bend at the foot of a mile-long descent, and begins another short ascent. There’s hardly any traffic on this lane - perhaps just a few hundred motor vehicles per day - except when a sportive is on, which is typically every other weekend in the summer. The bend itself, however, is pretty unpleasant, whether on foot, by bike or in a car.

The hairiness of this bend is compounded by a very poor road surface, upon which is deposited a load of loose gravel. Some months ago a rider came off here when braking in the bend on gravel. When club runs come through, the shouted warning “gravel!” cascades down the line.

The organisers of the Magnificat had done an excellent job of sweeping away  the gravel the day before and carefully marking that section of the route as hazardous. Unfortunately, just a few hours after they had finished there was an intense bout of rain and, as happens each time, much of newly swept surface was once again covered by muck and gravel.

Nevertheless, this is the example of the 'make it safe and they will come' explanation of safety in numbers in action: an authority (in this case the event organiser) had taken steps to improve the safety for cyclists and those cyclists arrived because they were taking part in an event in part because it had been prepared with their safety in mind. 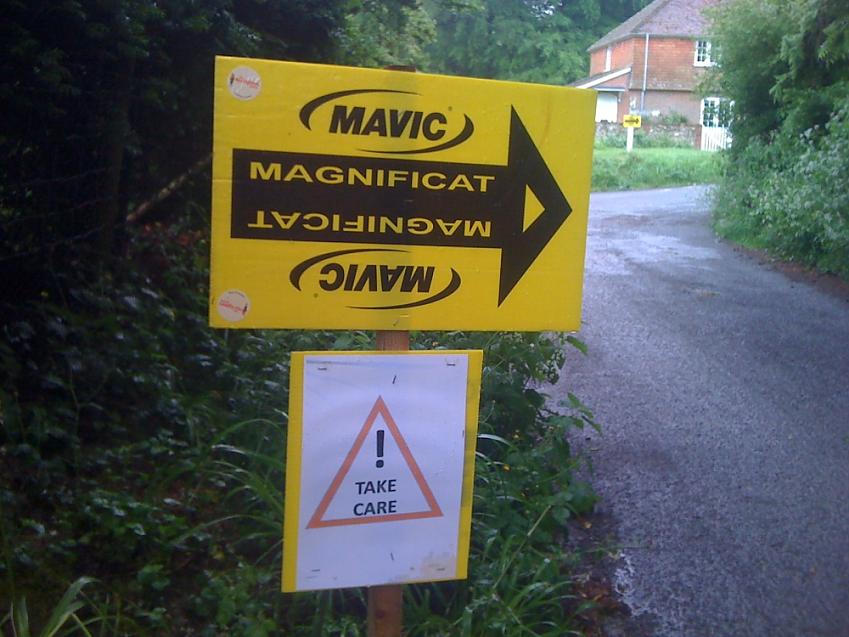 At a little after eight in the drizzly morning on Sunday the leading group, which had started 10 miles away, arrived at the village. The first three negotiated the bend and headed up the next hill and, as soon as they had past, a car appeared travelling in the opposite direction. Normally, drivers come round the corner here pretty fast, confident they are very unlikely to meet someone coming the other way. But on this occasion, having met several cyclists coming up the hill, the driver was very cautious approaching the bend, coming almost to a complete stop.

That's the other way safety in numbers works. Since drivers are mostly responsible in crashes with cyclists, changing awareness amongst drivers is likely to bring a safety benefit to cyclists. In this situation, drivers were being more cautious because the volume of cyclists on the roads made them aware an event was in progress.

I think both arguments - 'more cyclists means more attentive drivers' and  'make it safe and they will come' - hold water. The more cyclists there are, the more likely authorities are to take action to improve things; while drivers are more likely to feel empathy and understanding towards cyclists if they themselves ride a bike, or know someone who does. This micro-scale observational study shows how that relationship works both ways.