Our fourth instalment of An Audience with... featured our very first mountain biker guest of the series. The mountain bike community is aware of her easy-going style, creativity and panache - but it's rare to get a glimpse of the person behind the full-face helmet.

Veronique Sandler is a freerider and mountain bike film star pushing the boundaries of the sport.

On her film-making debut

VISION is the first pay-per-view mountain bike film, featuring female protagonist Vero, who talked us through how the project came about.

Within weeks of getting her first sponsor, Five Ten revealed they wanted to do a lot more than just gift her a free pair of shoes. They set to work together to create a feature-length film that travelled internationally, documenting the design and build of a jump trail test which remains open to the public to this day. She told us:

The whole thing was the highlight of my life! I just love riding, travelling, digging and filming, it just mashed the whole lot together. It was so sick!

On riding in a male-dominated sport

Whilst Vero has a strong friendship group with other top female riders, being one of the best female mountain bikers in the world puts Vero in the unique position of being encouraged by, and riding with men in a male-dominated sport.

She explained, "I don't care if it's a guy or a girl, I just see people as riders. Once I stopped caring, my riding just got so much better, I stopped being intimidated if I went to the skatepark and it was full of guys who were better than me. There's always people better than you and people worse, you realise everyone just wants to ride. It made so much difference to me."

Freeride mountain biking is by nature very much a mental game, attracting people who get their kicks by pushing through fear. Watching the size and speed of Vero's riding it would be easy to put her in the category of 'mad' or 'fearless' (or both), but during our chat we came to realise that Vero's approach to fear is the same as everyone else's.

Her honesty resonated well with the audience. She confessed, "I'm scared like, all the time. I've sort of realised now, if I'm scared of doing something just because it is big or gnarly or being scared because I don't have the capability to do it. So most of the time - touch wood - I know the difference between those things. I definitely know where to draw the line and just go home instead.'

As well as being a talented rider, Vero is also a gifted Illustrator. She hand-drew the cheerful graphics that litter VISION, adding a lovely personal touch. We decided to get the audience involved in a fun game of pictionary, as Vero drew items that represent her life. From “full face helmet” to “dog” we saw hilarious sketches that kept you all guessing. 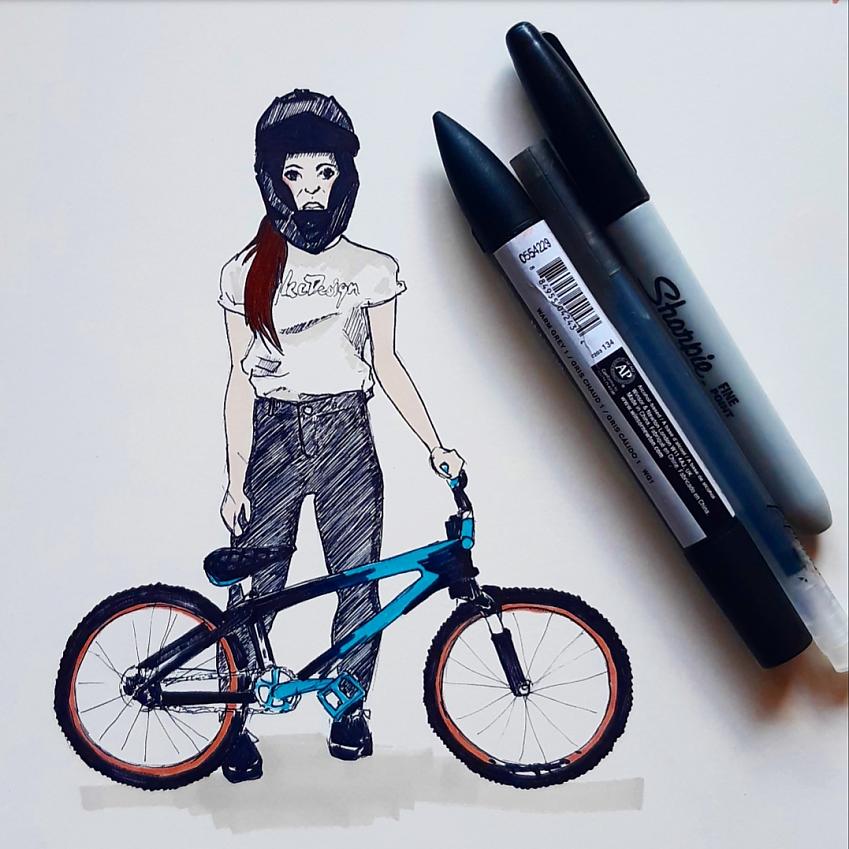 Thanks to everyone who watched and joined in. Cycling UK is running the An Audience with… series to provide entertainment and bring the cycling community together during social distancing, as well as to raise attention to our vital campaigns; free Cycling UK membership to NHS and frontline health workers and our donate to keep the wheels turning.

Tune in next week for An Audience With… Marty MacDonald,  Cyclo-cross commentator.

Anna Glowinski View
Cycling UK continues to support the UK to cycle
This remains true during this difficult period with the ongoing threat of coronavirus Covid-19
Read our latest advice on cycling
Sick of being close passed by drivers?
Please donate to help us drive down dangerous driving by equipping police forces to run driver education programmes
Donate