Liz Colebrook in her workshop

The UK is enjoying a renaissance in custom-built bikes, and it’s not just blokes in sheds who are busy. Dan Joyce spoke to two award-winning female framebuilders, one who currently has her bike on display at the V&A museum in London.

The revival of steel is real. Not everyone wants an off-the-peg carbon or aluminium road bike, as evidenced by the 5,000-plus visitors who attend Bespoked, the UK Handmade Bicycle Show, each year. It began in 2011 with 40 exhibitors; in 2017 there were over 100. Most visitors and most builders are men, but the blazing torches are increasingly being wielded by women.

It’s still a modest number, something that Caren Hartley of Hartley Cycles puts down to slow-to-change social mores. "I think the reason for the manufacturing industry in general having fewer women is due to social conditioning," she said. "Girls are taught from an early age that a workshop isn't really a place for them. Thankfully, this is changing."

Liz Colebrook agreed. "It’s changing but it’s a big tanker to turn." Role models are important, she suggested, and there haven’t been many for women wanting to break into the bicycle industry. "I met a young women in Portland who has been running her bespoke wheelbuilding business for several years now, and she thanked me for pioneering the way for her. I have Georgena Terry and Isla Rowntree to thank for leading the way for me. And how many people know the story of Pat Hanlon, who built wheels for famous riders in the Tour de France? Many wrongly assume Pat stands for Patrick. She had the absence of men during WW2 to thank for her chance to get into the trade."

Girls are taught from an early age that a workshop isn't really a place for them. Thankfully, this is changing.

Colebrook has been in the cycle industry for 30 years now, despite little encouragement growing up. "I began taking my first 3-speed Raleigh bicycle apart aged 14," she said. "I tried to do woodwork at school but could only do it during lunch hour so ended up doing art, needlework and cookery instead. I look back now and think what a huge waste of my practical engineering mind it was."

She went on to work in a Manchester bike shop for 12 years. While the shop had an attached framebuilder, Colebrook only began thinking about building bikes herself when she went to work for Islabikes, after qualifying as an occupational therapist. "The final piece in the jigsaw was spending my annual leave learning to design my own frame with Bryan Jackson at Downland Cycles. Meeting Trevor Jarvis of TJ Cycles, the builder of the famous Flying Gate, sealed the deal. I am very proud to say that he has given me the keys to this kingdom – I now build all Flying Gates."

Caren Hartley graduated to framebuilding after doing a master’s degree in applied art/metalwork at the Royal College of Art. "I first trained as a jeweller and silversmith, in fine metalwork," she said. "The career jump into framebuilding was a mixture of being dissatisfied with the fine art world and my gradual submersion into the cycling community. I started out helping out at Saffron Frameworks and Rusby Cycles, just trying to learn and absorb everything I could from them. Later, I took a class at The Bicycle Academy – which is where I made my first full bicycle." 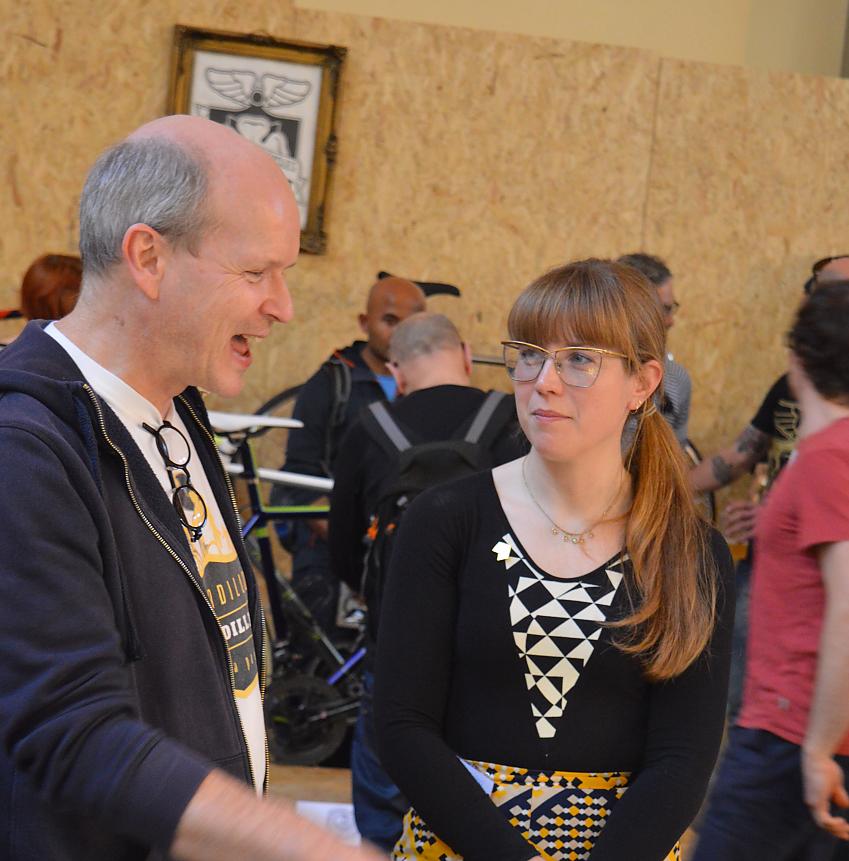 The market for bespoke bikes for women ought to be larger than that for men, because women – particularly shorter women – have a smaller choice in off-the-peg bikes that fit properly; the cycle industry best serves Mr Average. Even when brands do offer bikes for Ms Average, they’re not always fully thought through. "That is to say, smaller frames but not necessarily shorter crank arms or lower bottom brackets," said Colebrook, "nor consideration for smaller hands on the handlebar, for example by fitting larger adjustment blocks so the brake lever reach is reduced."

So why are there fewer bespoke bikes built for women than men? "The issue is twofold," said Colebrook. "First, awareness: it’s highly unlikely that a salesperson in a cycle shop would recommend a handbuilt bicycle, as most are in the business of selling brands they have chosen to stock. And secondly, cost – and justification of that cost." The price of a handbuilt bike, she implied, can seem prohibitive if you don’t class yourself as a ‘serious’ cyclist.

Even if you get a handbuilt frame that suits you perfectly from the likes of Hartley Cycles or Beaumont Bicycle, cycle component standards can create additional hurdles. Both Hartley and Colebrook admitted to a few bugbears.

"Top end groupsets aren’t made with a 165 crank length, and the levers of hydraulic braking systems are simply too large for petite hands," said Hartley. "Wheel size can be a big issue as well, as there is less choice available for tyres and rims in smaller sizes like 650C."

"The triple chainset gets me going," said Colebrook. "And cyclists who don’t race insisting they need a 52-tooth chainring. Thank god for SRAM’s 'one by' groupsets and hooray for the compact double. Q-factors can be rather wide, which is why I stick to a square taper bottom bracket where possible."

All framebuilders have flourishes and favoured design ideas, even when – as with Hartley and Colebrook – they don’t have a typical customer or bike. "I feature a lot of hand-cut, solid silver detailing on my bikes," said Hartley. "One of my signature features is the Contour Crown: I custom make the fork crown from stainless steel sheet, which is manipulated by hand to shape."

Liz Colebrook said: "I was particularly pleased with a pearl white Flying Gate, where the customer asked for all the fancy lugs to be emerald green – although the finish is all down to Argos in Bristol. My step-through frames are a signature design, as I aim to build them low enough to actually step through."

If you'd like to see more of Caren Hartley's work, she is featured in the Women's Hour Craft Prize at the V&A Museum until 5th February 2018.

How to build the right bike for you View
You too can champion cycling in the UK
Give your support today to help Cycling UK’s charitable work tomorrow. We double every pound you give through other sources to help change lives and communities through cycling.
Volunteer now
Cycling UK continues to support the UK to cycle
This remains true during this difficult period with the ongoing threat of coronavirus Covid-19
Read our latest advice on cycling
Join Cycling UK to help us change lives and communities through cycling
Membership gives you peace of mind insurance, discounts in cycle shops, rides & routes
Join now