Santa and elf cycling through the forest
By Tiia Jaakola
Friday, 24 December 2021

Though perhaps not as grim as the year before, 2021 has been another bumpy ride. As the hard-earned holidays start, stretching out into infinity like a blank canvas of possibilities, it can often seem easy to pack in a ton of fun-filled activities, spending time socialising with everyone or watching lots of TV.

You want to make the most of the time off, and you’re sure that this year you’ll definitely also relax as efficiently as possible. Yet before we know it, we often find ourselves on the other side, wondering what happened. Staying active during the season can prove particularly tricky for many reasons – too much rocking around the Christmas tree, a busy schedule with the family. You might be wondering if the sofa has actually swallowed you up.

Some of us might even have been tempted by the Rapha 500, where you ignore family, friends and feasting for battling out 500km in the cold between Christmas and New Year’s Eve. You might have seen the appeal of this worthy challenge…if it wasn’t so tough. 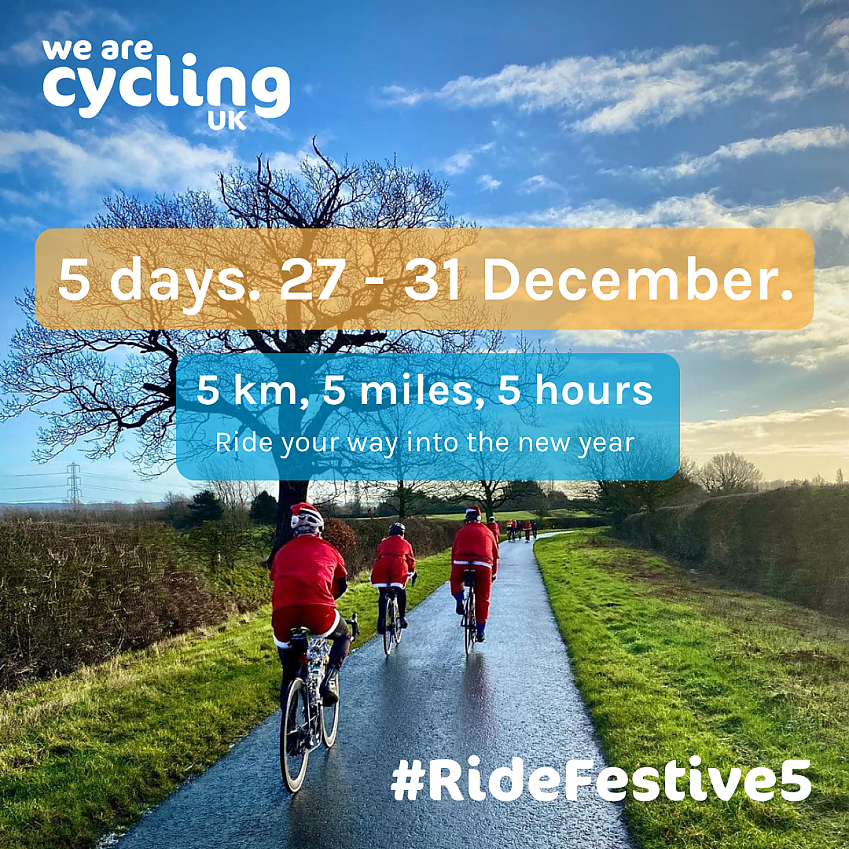 Thankfully, at Cycling UK we’ve had the foresight to come to your rescue. It’s much easier to stay motivated when you make a commitment, so we’re asking members and non-members alike to pledge to squeeze in an achievable 5x5 – that means that for five days between Christmas and New Year, you’ll ride five kilometres, miles or even hours, whichever you prefer.

Because we understand that the festive season comes with many other commitments, we didn’t want to set the bar dauntingly high. However, we’re by no means asking you to limit yourself if you’re a seasoned cyclist – feel free to make it 50-a-day if that’s how your wheels roll.

And if you need more convincing, here are five good reasons why we think you should go for it - in addition to the £50 Amazon gift voucher that you could win if you sign up.

I’ve eaten too much turkey/chocolate/mince pies!

If the turkey isn’t the only thing feeling stuffed this year, we won’t judge you. After all, why shouldn’t you indulge yourself after spending so much time in the kitchen prepping, not to mention the year that you have just spent working hard. But despite the rewards being well-deserved, they can come with drawbacks, and overindulgence can make you feel sluggish.

The good news is that you can work off both the guilt and the calories by getting on your bike, and it’ll give structure to days that seem to blend into one another. Even a short burst of movement can give you your energy back so you can stay on top of all your other holiday plans.

However, unless you make the decision to get up and go out beforehand, it can be hard to extract yourself from the sofa, so it’s best to bed in those plans to stay active well in advance. 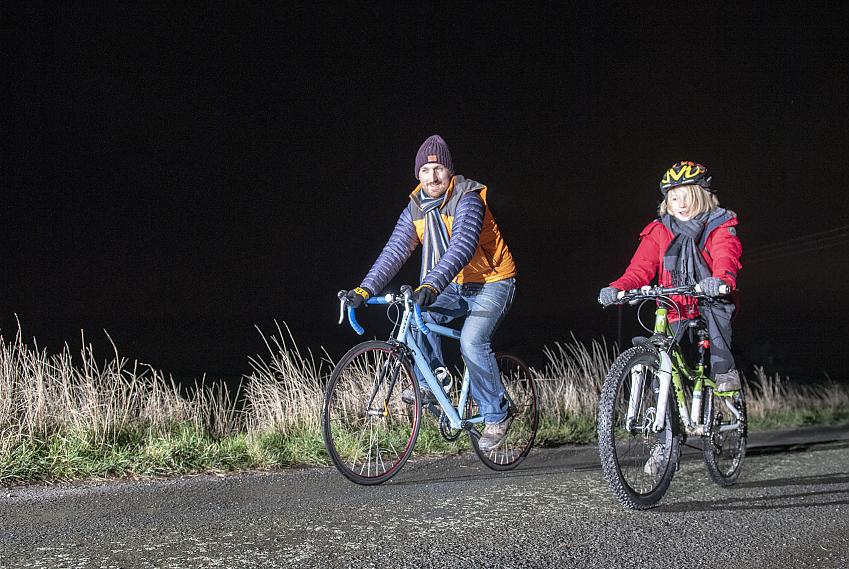 A father and daughter on a night-time bike ride

You’ve already done various to trips to drop off cards and presents and wish people happy Christmas and yet, there’s so much left to do. You must see friends, family, cousin Sally, uncle Jim and someone’s dog, particularly because last year you couldn’t. How could you possibly fit in a work-out amidst all this?

Our guess is that if you have that many visits planned, some of those might be within a cycling distance, so why not hop on your bike instead of driving? You’ll feel all bright-eyed and bushy-tailed when you see everyone.

I’ve decided to cut back on socialising, again.

Sadly, it appears that the 2021 festive season may not be quite the return to things how they used be, much as we’d originally hoped. With new pandemic variants kicking around right in the run-up to festivities, many of us may be reconsidering our plans and meeting up with a limited number of people.

But unless you’re particularly vulnerable (in which case, only do what you’re comfortable with), socialising outdoors is a great option. Going for a group ride or cycling with a friend helps you hit two birds with one stone while feeling more confident that you’re not putting yourself or others at risk.

I need to escape the madness.

It’s Boxing Day and you can’t remember when you last had a moment to yourself. Or is it Boxing Day? In fact, which year is this? You might feel like the kids have simply never left the house at all, or you might have had a due reminder that family time is not as easy as you remembered during those long months of staying at home.

If you’re dreaming of escape, the solution is simple. Nothing spells me-time like a peaceful, meditative solo ride, whether it’s through the countryside taking in the winter scenery, or a spin around the city marvelling at how quiet the streets are during the holidays.

I have too much shopping to do.

Whether it’s because you have your eye on some great offers in the sales, or return presents that don't fit, hitting the shops on your bike is a quick way to flit from store to store and get everything done in one trip.

If you’re wondering about carrying your shopping home, there’s a wide selection of roomy saddle bags and panniers available, making cycling the ultimate way to beat the queues and snatch those bargains.

Really, there's no real excuse why you shouldn’t be able to manage 5 x 5 this Christmas break…but did we mention that we’re running a prize draw with a £50 Amazon gift voucher available for one lucky person who pledges to give our challenge a go?

We’re running a prize draw with a £50 Amazon gift voucher available for one lucky person who pledges to give our challenge a go.